<strong>LOGAN—</strong> For most adults, the unique experience of childhood sleepovers is something that remains in childhood. Joking around in the middle of the night and torturing one’s body with sleep deprivation is generally something reserved for a younger generation.

However, for a couple of days each year, roughly 12,000 people take to the streets in the largest relay-race in the nation, and the biggest running event in Utah – the Wasatch Back course of the Ragnar Relay.

“It’s like a slumber party for adults. It’s like an adventure race meets this wild and crazy 5k. It’s really incredible,” said race co-founder and COO Tanner Bell. “People decorate their vans, they paint their faces, they dress up in costumes, so you see this incredible sort of self-expression. It’s really an opportunity for people to let their Ragnar out a little bit, to be a little bit wild.”

For those unfamiliar with what exactly a Ragnar is, it is not just the name of the mascot of the Minnesota Vikings. Ragnar was a ninth century Norse king that Bell said was a conqueror, a wild-man, and whose persona really fits the spirit of the race.

“It gives people the opportunity to get away from the humdrum of daily life and sort of come up and get a little crazier than you normally would, and accomplish something that you wouldn’t be able to do on your own,” Bell said of the race. “The experience is really magical.”

Having grown to include 15 Ragnar Relay’s nationwide, the Wasatch Back – which begins in Logan, covers 197.4 miles, and ends in Park City – is the inaugural race for the circuit and began in 2004.

A native of Kaysville, Bell, now 32, was just a regular college student attending Brigham Young University along with his childhood friend and roommate Dan Hill. Hill had been a runner at Davis high school, which the two attended, and the duo had grown up listing to Dan’s father, Steve, talk about the <a href=”http://www.hoodtocoast.com/” target=”_blank”>Hood to Coast</a>, a race in Oregon Steve had been involved in during the ‘80s.

Having listened to Steve talk about wanting to create a similar event in Utah, the childhood friends decided to do just that and the first Ragnar Relay was born.

“We launched very quickly. We decided we wanted to do it in January of 2004, and we launched in June of 2004. It’s definitely a different undertaking today than it was back then,” Bell said. “Back then, it was me, Dan, his dad, a couple volunteers, and two big U-Haul’s full of cones. In fact, I don’t even think we got permits – don’t tell the Public Works guys that – but with 162 runners, nobody really noticed us.

“It’s a huge operation today. We work with four sections of the DOT (Department of Transportation), six counties, over 35 cities, and everybody we work with is just phenomenal to work with. It’s been a really great thing for us to be able to get involved in the community, and to work with the cities and counties.”

From its small beginning, the Ragnar Relay series now draws roughly 70,000 contestants nationwide to its 15 events, and will continue to grow, with future race sites already in the works. Bell said he believes it is the unique team aspect of the event that appeals to so many people.

“The magic is you can have an ultra-marathoner, a hard-core runner, on the same team as a beginning runner that just trained for this event and it’s their first real running event. They can both push themselves to their own limits, and they can both really have an incredible time,” Bell said. “I think that’s really what’s amazing about it, is it really appeals to the whole demographic of the running scene. I think that’s why we’ve seen this explosion of Ragnar, because it’s accessible, and it brings the team aspect to running.”

Teams in the Ragnar consist of 12 individuals and usually two vans, though an ultra-team of six can compete as well. The Wasatch Back kicks off at the Utah State University track near Romney stadium, beginning in the pre-dawn hours of Friday morning and continuing into the mid-morning, as teams leave based on their skill level.

Between Logan and Park City, there are 36 legs of the race, which equates to each member of a normal 12-person team running three legs of roughly five to eight miles each. Bell said the 2012 Wasatch Back will have more than 1,050 teams participating. The race finishes up Saturday at Park City High School.

“It’s great to be based here and be able to see the growth. People ask me what’s my favorite (Ragnar) besides Wasatch Back, because Wasatch is obviously my favorite – we live here, this was the first one. It’s fun to sort of have this legacy. It’s nine years strong now, and I hope in 20 years my kids will be asking me what it was like to start the Wasatch Back.”

Bell said registration for the 2013 Wasatch Back Ragnar Relay will begin roughly a week after the 2012 race ends. He recommends registering as soon as possible as he said he expects the race to fill up in less than a month. For more information, visit <a href=”http://www.ragnarrelay.com/”>www.ragnarrelay.com</a>, and check in with <a href=”http://www.cachevalleydaily.com/”>www.cachevalleydaily.com</a> for all your 2012 Ragnar Relay coverage. 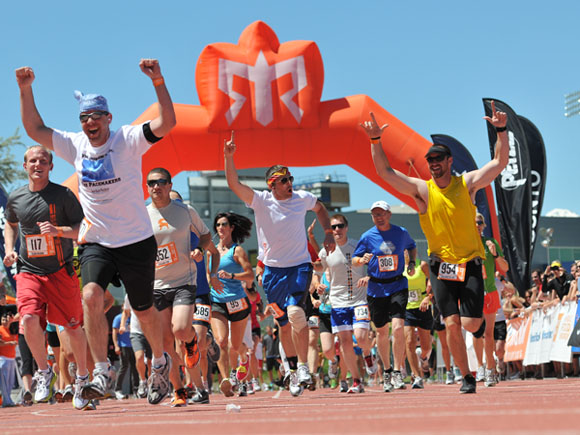