<em>This is part one of a two-part series on the Ragnar Relay’s Wasatch Back, and one Cache Valley family’s reason for running in the event and the trials and tribulations it involves. </em>

For “Team Jen,” running in the Ragnar Relay’s Wasatch Back isn’t about speed or competition, but about family.

Running in memory of their beloved daughter Jennifer, Ken and Jackie Thompson and 22 of their family members annually take part in the grueling overnight race. This year, “Team Jen” began its trek at 5:30 in the morning on Friday, June 15.

“You don’t love your children any different, but Jenny was probably my best friend,” her father said. “She was my sweetheart, and I know how proud she’d be of this whole family. It means a lot to have the whole family. It’s amazing to see how the family has rallied together for such a good cause. They all come together and run because of that memory. We’re just proud to get together.”

Sixty miles and 6.5 hours into the course, each runner had completed their first leg of the race as the team reached the major exchange at Snow Basin.

A seasoned veteran, Jackie was participating in her fourth Ragnar Relay, along with her daughter Tori Meacham. It was the third year with “Team Jen” after Jackie decided to form a team to remember her daughter Jennifer, who passed away suddenly and unexpectedly in 2006.

Joining the two veterans was a mix of newcomers and second-year runners, as well as several other veterans.

“I don’t like to run. I’ve always liked to play tennis or something like that,” her father said. “Running flat out isn’t me. I know Jenny would be proud of me because I dislike it.”

For the Thompson clan, the race is about being together and enjoying the experience, exhibited by the team reaching out to members of other teams lacking support and supplies.

During Jackie’s second leg – an 8.2 mile jaunt – as the team van waited for her to reach them, team members were quick to respond to a request for water from a passing runner.

The outreaches were abundant both within the team and towards other teams, as other teams frequently inquired about “Team Jen’s” van which was decorated with pictures of Jennifer’s bridal photos, pictures of her with her children, and with other family members.

With no complications or roadblocks in the first rotation of legs, things quickly escalated for “Team Jen” during the second go-around.

Haley Cowdin, Jennifer’s sister, was determined to run her three legs despite being five months pregnant with her second child. Shortly after finishing her second leg, Haley was accompanied by her husband Jake to Ogden Regional Hospital via ambulance after experiencing cramps.

Losing two of its runners unexpectedly didn’t deter “Team Jen,” however, as family members stepped up to run the additional legs.

Fatigue set in as day turned to night and the second rotation of legs came to a close. Team members were forced to face more challenging legs, including the daunting task of running through the dark, without any aid or supplies from the team.

“The toughest part of Ragnar is that you’re running all night long,” Jackie said. “We’re in a van with 12 of us, so you don’t go ahead and get your sleep. It’s running one leg right after another. I appreciate the effort that everybody puts into this and I am proud of everybody.”

As the clock struck midnight, the team made its way to South Summit High School to begin its final rotation of legs. 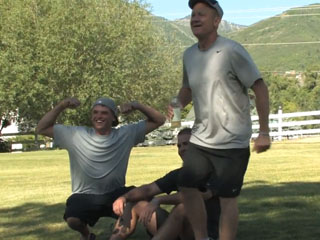