“It was good,” Logan coach Ron Stott said. “I was with (Providence) for 10-15 years. The game is never over until the last out. It’s cliché, but with the Wolverines it’s true.”

Solid defense was the difference as Logan’s outfield came up with several big catches to stop runners from scoring. In the first inning with a runner on second, Royals second baseman Russ Madsen fielded a ground ball and caught Wolverine Brad Singer off the bag. Singer was unable to beat the throw back to second, and was called out.

Trace Hansen got Logan on the board first with a sac-fly with two runners on and one out in the third inning. Brandon Petersen scored on the play to give Logan the lead. The Royals increased their lead to 4-0 in the fourth on home runs by Madsen – a 2-run shot – and Kyle Raymond.

“We came out expecting to win,” Stott said. “We came out hitting the ball and we got key hits when we needed to. We’re getting to the point where we’re gelling and getting an identity as a team.”

Providence fought back in the bottom of the fourth inning, scoring two runs on three hits. Kevin Hall singled and advanced to second on an infield hit, then scored on an RBI-single to center field by Luke Madsen. McKay Hedin scored two batters later when Singer picked up his second hit of the game.

Singer reached base in all four at-bats, finishing with a double, a single and two walks.

The Wolverines pulled back to within one in the fifth inning when Justin Petersen connected on an RBI-double to center field. However, with one out and Petersen at second, Providence was unable to bring him home.

The Wolverines had seven hits through the first four innings, but were unable to push any runs across, and Providence left 12 runners on base in the game – including five in scoring position.

Logan answered back in the sixth with back-to-back doubles after Madsen earned a lead-off walk. Madsen scored his second run of the game on the first double, and Brayden Anderson made it 6-3 with his second hit of the game.

Down three with two innings to play, Providence put together a rally in the sixth.

A leadoff single from Dex Bowen and back-to-back walks loaded the bases for Dustin Smith. Smith came up with an RBI-single to make it 6-4 with two outs and the bases still loaded.

Unfortunately for the Wolverines, the Royals defense was up to the task and centerfielder Kevin Hall made a nice catch while back-peddling to the wall to rob Jed Jensen of a hit and prevent runs from scoring.

Steve Vincent made it 7-4 for the Royals with a solo home run in the top of the seventh, and Andersen worked the seventh to earn the save for Providence. Jarren Tyler pitched four innings for the Royals to pick up the win, giving up three runs on nine hits before handing the ball to Anderson to finish it out.

“That’s how it goes,” Jensen said. “We’ve got a few guys right out of high school, so it’s just a matter of learning the game and the situations.”

Logan is now 7-4 overall, including a 7-3 record in the Northern Utah League. Providence, meanwhile, fell to 8-2 in NUL play, and is 10-3 overall on the season.

The Royals will have Thursday and Friday off before playing a doubleheader against Smithfield Saturday at 6 p.m. The Wolverines will look to get back in the win column as they host the Brigham City Peaches Friday at 7:30 p.m.

“We show up expecting to play with everybody,” Stott said. “The Blue Sox are a good team. We don’t expect anything to be different from when we played them the first time. They’re coming off of a big win against Providence, so if we show up and play well again on Saturday we’ll be in good shape.” 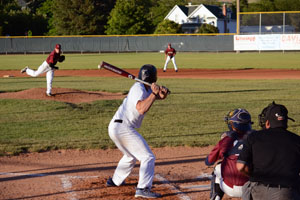