<strong>LOGAN</strong>— Good things come to those who wait. For many, the 2011-12 Utah State University athletics season provided the end to a lot of waiting.

Not only did the USU football team go to its first bowl game in 15 years, but the Aggies also unveiled a new Nike designed logo, announced a fully-funded $6 million training complex, and accepted an invitation to join the Mountain West Conference in 2013.

Working behind the scenes for many of these accomplishments has been USU Athletic Director Scott Barnes. Since taking over the AD job in April of 2008, Barnes has been a tireless advocate for the Aggies.

“It has been a phenomenal year. We have a lot of plans. We’ve got to now take the Nike logo and roll it out in a way that would provide additional revenue. We’re working hard in the regard,” Barnes said. “We’ve got the new facility planned ahead. We have the basketball practice facility on the books to do next and then we’ll come back and work on the stadium. Building on our facilities will never cease, we’ll continue to do that.”

The memorable year in Aggie athletics started off with the USU football team which closed the 2011 regular season with five consecutive wins – all of which came down to the wire – to become bowl eligible for the first time since 1997. Though the Aggies lost their bowl game to Ohio, 24-23, the season was a breakthrough for third year head coach Gary Andersen.

The Aggies seven win season – which included wins over current and future MWC members Wyoming, Hawaii, Nevada, and San Jose State – may also have been the breakthrough USU needed to create an opportunity to jump the sinking ship that is the Western Athletic Conference.

“Football certainly drove the discussion. The fact that coach Andersen and his staff and student athletes have done the job that they’ve done was a huge part of that, but it wasn’t the only part,” Barnes said.

That perception, Barnes said, was based on what they had heard and thought they knew – a football program that hadn’t won in 15 years, an under-funded athletics department, and a program that didn’t have the resources or facilities to compete a higher level.

“Craig (Thompson) had never been on campus at Utah State, and he only knew about us through our past a little bit. He hadn’t been on campus, didn’t know anything about the area,” Barnes said.

“It really became this two year campaign of sorts. At times, much more involved and other times not quite as much – depending on the circumstances at the time. There was a lot of movement. That led up to sort of the final moves that created a need for the Mountain West – with San Diego State and Boise State moving on – believe me, we had been talking to Craig at length, and the presidents and AD’s (of MWC member schools), and when that time came, they knew who we were.”

Despite USU putting itself in position to receive an invite to the MWC, Barnes said the always-changing landscape of college athletics left the Aggies in a holding pattern. As the Mountain West discussed alliances, mergers, and various options with Conference-USA, the Aggies were left waiting.

“One of the biggest challenges is that some of it wasn’t in our control. I’m very comfortable with the notion of having the things in my control and being responsible for that and crafting a plan and making the right decision,” Barnes said. “That’s tough to sit and wait and your destiny is in the hands of the circumstances.”

However, while the Aggies were waiting for an invite, they certainly weren’t sitting around. Aided by former football player and alumni Charlie Denson, Nike Brand President, USU unveiled a new Nike designed logo.

At the logo unveiling, Barnes joked that the Aggies were working on changing the WAC logos that appeared on the images of the updated football field and basketball court. Those words proved true when USU officially accepted its MWC invite a week later.

“The call (from Thompson) was one thing, but until that ink was dry I wanted to make sure we had it signed, sealed, and delivered,” Barnes said. “The feeling was of excitement and relief – the excitement for the opportunity that we have, and the relief at frankly not being left out. Both were very strong feelings.” 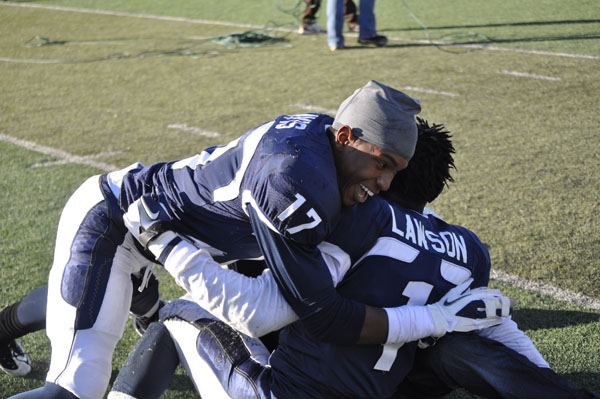