<strong>HYRUM–</strong> There are a variety of reasons to run the Blacksmith Fork Freedom Run in Hyrum on the Fourth of July.

For one thing, participants get a free T-shirt. For another, the 15K is a smooth downhill stretch in the cool morning air. Participants this year described conditions as nearly perfect.

“It felt great,” race participant Nicole Earl said. “It was perfect weather. It’s just a beautiful run so that helps.”

Earl, a resident of Smithfield who ran this race for the first time, said her reason for running it was her husband, who also participated. She said the 9.3-mile run is a great training race for the Top of Utah Half Marathon, which she plans to do at the end of August.

“I’ve watched [the Freedom Run] a couple of years and it looked like it could be fun,” she said.

Race coordinator Brian Hunt said this event sees runners of high and low experience. People tell him they run as a family every year, and others do it for a challenge, he said.

Brenda McQueary, of Layton, said for her running the 15k is a goal to work for.

Jill Williams and McQueary like to run the race every year, though it’s not always together. The friends laughed and joked in the crowd of runners after finishing.

Williams said, “We were pretty close. I caught up to her [McQueary] at the end. We were going to run together.”

“I couldn’t find you,” McQueary said.

“I couldn’t find you, either,” Williams said as the girls laughed.

For first place finisher Conner Mantz, of Smithfield, the Freedom Run is a nice downhill distance race among the several races he runs throughout the year. The 15-year-old cross country runner from Sky View crossed the finish line to cheers from bystanders at 48 minutes, 45 seconds.

In the overall female category, Miranda Overy of River Heights finished first at 58:14, then Megan Call of Salt Lake City at 1:01:54 and Ralee Eck from Smithfield came in third at 1:03:26.

Hunt, who works for Cache Sun ‘n Snow Runners, said the event has been going on for close to 40 years now and this year there was more women running than in the past. Of the 645 registered runners, 61 percent were women.

“We have a few more women this year,” Hunt said. “In fact, in most of the races the club puts on, we’ve seen the number of women increasing from year to year.” 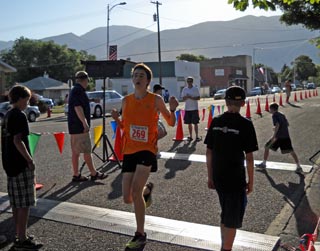 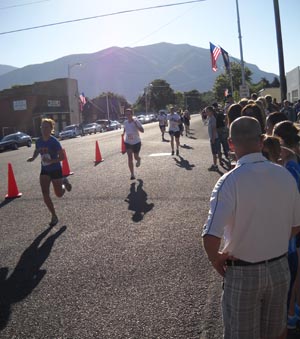