The first call took place around 11 a.m. when crews responded to the Caine Lyric Theatre on Center Street in Logan. With the road already closed due to the sidewalk sale, crews had to maneuver to get down to the building.

Logan City Fire Marshall Craig Humphreys said the fire started when a slid curtain came in contact with a spotlight and ignited. Humphreys said the staff on hand was able to remove the curtain and extinguish the flame with a fire extinguisher before the fire could grow. Fire crews checked for any remaining danger, and helped fan smoke out of the building.

Meanwhile, crews from across the valley responded to a much bigger blaze, a structure fire near 200 East and 400 S. in Smithfield. The house that caught fire had, according to neighbors, been abandoned since 2007.

No one was in the home and no injuries were reported, but the house was a total loss. Surrounding homes were occupied and received some outer damage. Smithfield resident Jake Campbell lives in the house directly East of the destroyed structure and had the plastic siding melt off of the West side of his home due to the heat from the flames.

Campbell declined to be interviewed, but was visibly upset about the damage caused to his home, and did say he had told the city multiple times the two-story home needed to be destroyed.

As of 3 p.m. Friday, officials had not released a cause of the fire. Smithfield Fire Capt. Mike Weibel did say an investigation was underway, and details would be released as soon as they were made available. 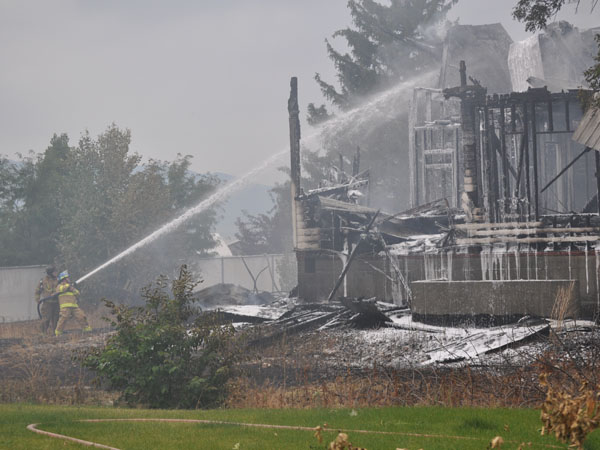