A 92 year-old Hyrum woman was fatally injured Friday night in a two-car traffic accident on U.S. Highway 89-91 in Wellsville just before 10 p.m. Utah Highway Patrol trooper Josh Preece says Priel Covert Burton was killed in the accident which is still under investigation.

The trooper says Burton was a passenger in a Dodge Caravan driven by 63 year-old John Burton of Hyrum. Burton was traveling southbound and was trying to negotiate a left-hand turn onto State Road 101 when he was struck by a 1992 Mercury Topaz.

That vehicle was operated by 29 year-old Kenneth Killian of Logan who was going north in the outside lane of Highway 89-91. Although the passer was killed in the crash the drivers were not injured.

Preece says all of the occupants were wearing seat belts. State Road 101 was shut down for approximately two hours while the accident was being investigated. 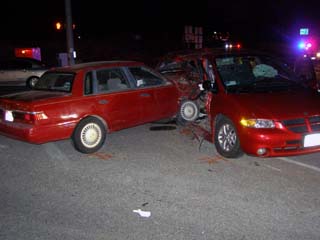