Saborio leapt over his defender and headed in a gorgeous pass from playmaker Javier Morales in the 58th minute to put the home squad up 2-1.  The goal proved to be the game winner, and it was his second of the night.

“I knew that Sabo was there in a one-on-one, and he’s on fire right now,” Morales said. “He’s so good. If you take a look, maybe he touched three balls in the box, and he scored twice. I knew he was going to score.”

The buildup for the winning goal was about as tremendous as the finish. Substitute midfielder Ned Grabavoy took control of the ball near the corner flag. Morales called for the ball from Grabavoy and one-timed in a looping pass that found Saborio’s head.

Grabavoy said he almost didn’t play it back to Morales.

“I ran into that space and no one came with me,” he said. “I thought about making the turn and hitting it in, but I heard (Morales) scream for it.  Usually when he screams for it, he wants it, and he’s going to do something pretty special with it. So I turned it back, and Javier played a great ball in and Sabo scored a great goal.”

“The effort by Sabo was spectacular,” head coach Jason Kreis said in assent. “To get up that high and hammer it home and down was simply quite splendid.”

Saborio opened up the evening’s scoring with a 34th-minute penalty kick, courtesy of the MLS All-star and Whitecaps captain Jay DeMerit, who really struggled in this game.

Fellow striker Fabian Espindola gathered in a deflected ball near the baseline in the 32nd minute and made an aggressive move towards the edge of the penalty area.  Under pressure, he sent in a tantalizing cross off his less-favored right foot toward the far post where DeMerit and RSL captain and fellow MLS All-star Kyle Beckerman were waiting. In the ensuing air battle, DeMerit was adjudged to have put his hand on the ball in the box.

Referee Kevin Stott awarded Saborio a penalty kick, and Sabo made it count.

The two goals were Saborio’s 12th and 13th on the season. In his last two home MLS matches, Saborio has scored five goals, two of which came from penalty kicks.

Kreis said Saborio’s penalty kick was well deserved, given the advantage RSL had in play and possession in the 10-minute stretch before the penalty.

“I really felt like we had the energy,” Kreis said. “Often times you’ll see those five or 10 minute periods go by wanting. I was pleased to see us score that goal at that moment. I do think it was just rewards for the run of play.”

Real Salt Lake maintained possession and flow of the game for the majority of the match, but during the first part of the second half, Vancouver found the space and passing lanes it needed to draw what had been a 1-0 match level.

In the 52nd minute, Camilo, Vancouver’s attacking midfielder, took a pass from the midfield and one-timed it over RSL’s back line towards a streaking Darren Mattocks. Mattocks beat the RSL keeper to the base line and sent the ball across and into the goal.

Mattock’s score was the culmination of a 10-minute stretch in which RSL’s defense looked frazzled and disorganized. RSL goalkeeper Nick Rimando said the goal was unfortunate, but it didn’t demoralize the home squad.

“Every team’s going to have a little spout where they’re going to go down and have some action on you,” he said. “You don’t want to go through that spell, but it happens. We got it together real quick and responded with a goal.”

Vancouver had a chance to take the lead moments later, but Jun Marques Davidson’s strike harmlessly rebounded off the post. Shortly thereafter, Morales had made his cross, and Saborio had scored the eventual game-winner.

The result was sealed in the 76th minute after Whitecaps goalkeeper Joe Cannon was shown a direct red card for handling the ball outside the box. Cannon was making a defensive play, attempting to ward of Fabian Espindola who had pounced on a poor back pass from DeMerit, but it backfired. Vancouver was forced to play out the remainder of the match with only 10 men, and Cannon will be unavailable when the RSL and Vancouver meet again on August 11 because of a red card suspension.

RSL will now head to Central America for its first match in the CONCACAF Champions League since losing the 2011 championship game at home to Monterrey. The Utah side will play Costa Rican club Herediano on Tuesday, July 31. 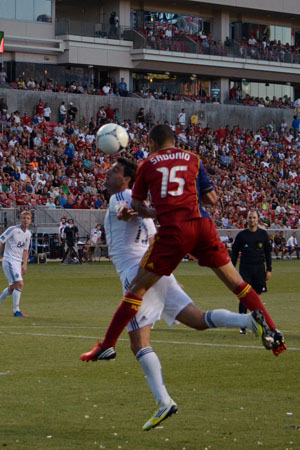