<strong>LOGAN—</strong> The USU football team held its final full contact scrimmage of the fall Wednesday night at Romney Stadium, and though the defense was the dominant unit once again, the offense made strides from the first scrimmage.

“We had a good showing, the biggest thing was we wanted to start out fast and finish pretty strong. We started out much faster than we did last week,” sophomore QB Chuckie Keeton said. “We came in with the right mindset. This time, compared to last scrimmage, we treated this more like a game. We had our game plan, we had set plays that we had in certain situations, and we were just locked in since the first snap.”

Keeton led the first team offense down the field against the second team defense on the first two drives of the game. Both drives culminated in scores, with the defense holding the offense to a field goal the first drive, but giving up a rushing TD to Keeton on the second.

The sophomore phenom – who stole the show in fall camp last season – had his second productive scrimmage, and clearly put himself in the lead to start the season opener in two weeks.

“I don’t think anybody who’s watched these last two scrimmages could not sit back and say there’s been no separation,” USU head coach Gary Andersen said. “Chuckie played good in the first scrimmage, and I thought Chuckie was pretty good again tonight. He gave us an opportunity to make some plays with his legs, which we know he can do, and he also threw the ball fairly well.”

Defensively, the first unit continued its stellar play as the second team offense struggled to put together anything on the night. Despite not causing a turnover – after recording five interceptions in the first scrimmage – the Aggie D did record a safety and notched four sacks.

On the offensive side of the ball, senior receiver Cam Webb may have been the star of the day. The former scout team player hauled in eight passes for 101 yards before leaving the field with an injury that looked like a possible concussion.

“On the sideline, he was like, ‘Man, I’m not used to getting the ball this much,’ but when you’ve got the hot hand and you’re catching everything that comes your way, we’ve got to feed you,” Keeton said.

The Aggies worked on special teams as well Wednesday, specifically punt and punt return. The first two punts turned into nice returns for USU, while the receiving team muffed (and recovered) the next two punts. Along with the kicking game – which struggled again – Andersen said special teams needs to continue to improve.

For the second straight scrimmage, Joe Hill was the featured back in the offense as he carried 12 times for 53 yards and a score. Senior running back Kerwynn Williams sat out of the scrimmage, as did senior wideout Matt Austin and senior receiver Chuck Jacobs.

Freshman running back Kelvin Lee returned from a concussion to showcase his talents for the first time, and teamed up with converted corner Ladale Jackson and JC transfer Abou Toure as the trio vie for the third running back spot. Joey DeMartino (broken bone in arm), and Robert Marshall (shoulder injury) did not participate in the scrimmage, though Andersen said Marshall is recovering quickly.

“I thought the offense was improved, but not where we need to be by any stretch of the imagination. The defense kind of flew around, (but) not as many big plays, not as many picks,” Andersen said. “The opportunities for players to make plays I think presented themselves much more for the offense today.” 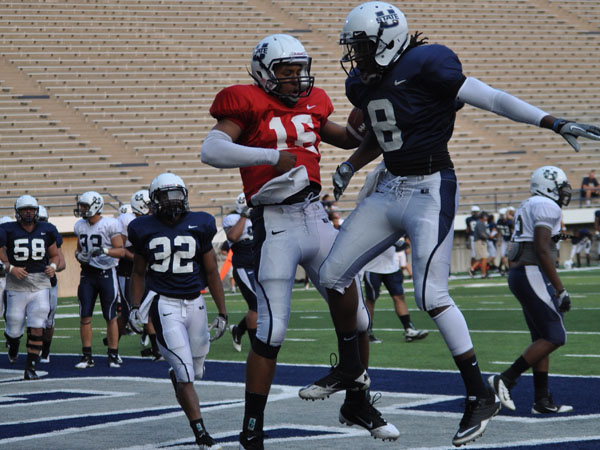