<strong>LOGAN—</strong> Two minutes into their season opener Friday night, the Logan Grizzlies looked exactly like the team that finished the 2011 season with a 14-0 record and a state championship.

Logan took the opening kick, and senior quarterback Lucas Falk led the Grizzlies down the field – connecting with senior receiver Jesse Braddy on a 14-yard strike to give the home team a 7-0 lead. Then the Grizzlies got knocked in the mouth, and they never recovered.

Northridge scored 27 unanswered points during the second and third quarters, and Logan received a big wakeup call, as the defending 4A State Champions opened the season with a 41-27 loss to the Knights.

“We didn’t come out very prepared, we thought it was still 2011,” junior all-everything player Taylor Compton said. “We’ve got to prepare a little harder, work a little harder, and we can’t underestimate anybody, because everybody is going to give us their best, so we’ve got to come everyday to practice and work hard.”

Andersen was not hit on the play, but planted his foot and watched his knee give way. The initial fear is a torn ACL, which would end his season, though there is hope it is just a bad sprain. An MRI this weekend will reveal more.

“It never helps you, but it’s never a reason for your performance to go down,” Favero said of the injury bug. “You never want to lose great players, and it’s part of the adversity that comes along with football, and it’s part of the luck element that everybody crosses their fingers and hopes you never have any injuries.

“Unfortunately, we’ve had a boatload of them this year. It’s our job to find a way to overcome that, and not use it as an excuse or a negative, and try to find a way compensate for it.”

Led by talented running back Davey Adams, the Knights drove the ball right back against Logan. The Grizzlies nearly stopped Northridge on a short fourth down conversion, but the Knights picked it up and then scored on the next play – a 19-yard pass from QB Nate Kusuda to Adams.

The Grizzlies second drive wasn’t nearly as successful as their first, and it stalled quickly. Northridge wasted no time in taking its first lead, as Dallin Isaacson hauled in a 51-yard pass from Kusuda for a 14-7 lead with 5:11 remaining in the first quarter.

“We blew some coverages, we were out of sync – bottom line is it’s the head coaches fault for us playing so poorly,” Favero said. “That was not pretty, and I’ve got to find a better way to get it done, because that’s not what Logan High football is all about right there, at least it hasn’t been in the past, so it’s going to be my job to fix it.”

Giving up big plays on defense, and critical turnovers on offense doomed the Grizzlies against a Northridge squad that was clearly excited to play a hyped-up Logan team. The Grizz committed five turnovers to the Knights zero.

“Your chances to win the game when you’re turning the ball over and giving up big plays aren’t very good,” Compton said. “We’re just a little rusty. Obviously, like I said, we need to come and prepare harder and work harder, and clean those things up.”

Despite some miscues in the first half though, the Grizzlies were still well in the game trailing only 24-13 at the break. Northridge started the second half with the ball though, and that lead grew quickly. Kusuda found senior receiver Zach Hayes for a 65-yard strike to really open things up.

After throwing for two touchdowns and two interceptions in the first half, Falk was hoping to get things going again, but he was leveled in the middle of the field, lost his helmet, and had to go to the sideline. Favero said he was favoring his back, and he did not return as Braddy replaced him.

Braddy had a great all-around game for Logan in the loss, as he caught four balls for 52 yards and a TD, rushed nine times for 40 yards and 2 TDs, and completed 8-of-19 passes for 149 yards with an interception. Falk finished 15-of-26 for 149 yards.

“This team’s got spirit. No matter what situation we’re in we’ve always got spirit,” Braddy said.

That spirit showed as the Grizzlies mounted a comeback and scored 14 unanswered points in the fourth quarter. Logan had chances to draw even closer, but turnovers and missed fourth down opportunities eventually doused any hopes of a Grizzly comeback.

“We’ve got a lot of tough ones this year,” Favero said referring to Logan’s schedule. “That was by design, and the bottom line is we’ll find out – football is a big boy game, and you’ve got to step up and be a big boy at times. We’re going to have to find ways to make our guys better.”

The Grizzlies next chance for improvement will be Aug. 24, when they host Cottonwood at 7 p.m. 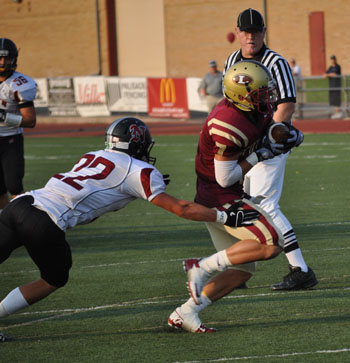