Hurricane Tigers came to Hyrum. The Mustangs were hanging on to a two game win

streak but as it’s early in the season were looking to get back into shape.

losing anything,” Mountain Crest head coach Dennis Giles said.  “Today we tried a lot of sophomores and got

them an opportunity to get in the game. It’s the preseason if we have to

sacrifice a win to get some girls some experience then that’s okay.”

The Mustangs didn’t have to sacrifice a win. They beat

Hurricane 2-0 and recorded their third shut-out of the week.

The Tigers got some scoring chances early but Mountain Crest

settled into their game and controlled the ball on their end of the field.

“For the first ten minutes I thought ‘oh my gosh, these guys

can play the game,’ and they played really hard,” Giles said. “Once we got

going and got our wheels under us we figured it out.”

The Mustangs tallied a goal in each half. Goal number one

from five yards out.

The second came in the right hand corner when Randi Davis

gave Mountain Crest a two goal cushion in the second period. The Mustangs were patient

and worked the ball to create many scoring opportunities.

working on and we got opportunities to score,” Giles said. “We created

starting to get there.” 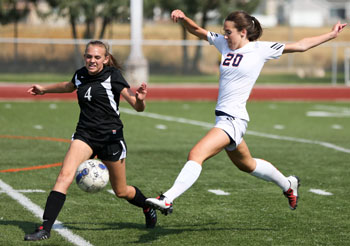