<strong>LOGAN—</strong> Mountain Crest didn’t waste any time in letting valley rival Logan know the Mustangs meant business. MC jumped out to a quick 2-0 lead in the first 10 minutes, and set the tone for the rest of the game as they defeated the Grizzlies, 5-1.

Mountain Crest’s Lexi Vance struck first as she scored on a breakaway goal assisted by Karlee Campbell in the third minute of the game. Vance then returned the favor as she wound through defenders dishing to Annie Nalder who put it in the back of the net.

Early on, Logan did have a few opportunities to strike back, getting open looks at the net, but the Grizzlies weren’t able to capitalize.

Even with a 2-0 lead, Logan was able to hang on and keep things close for the remainder of the first half and into the second, not allowing for MC to take over.

“When you crank things up and win 5-1 it’s big,” MC head coach Dennis Giles said. “We moved the ball well, kids were playing well, communicating well and having fun. You can’t for anything more. We’re in the best situation we’ve been in, in a long time personnel wise.

“We’ve had a couple of injuries that have hurt us, but now some other kids have had the opportunity to pick it up play, and they’ve done well. They’re working hard at it. I really enjoyed it, it was a fun game.”

Although Logan slowed down Mountain Crest, it couldn’t stop them. Kortney McBride scored off a Michaela Larsen corner-kick going up 3-0. The Mustangs struck again in the 64th minute, when Vance, again on the assist, crossed to Campbell for the fourth goal of the night.

Logan’s only goal of the match came in the 70th minute when Katelyn McCusky caught the Mountain Crest defense off-guard and found the back of the net.

“It was a tough night for us, but hopefully we learn a lot from it and can keep improving,” Grizzly head coach Mitch Peterson said.

MC’s final goal came in the final minutes when Campbell assisted to freshman Brinlee Welch to cap it off at 5-1. Mountain Crest showed off its deep roster with five different girls scoring goals.

“Our defense was fantastic,” Giles said. “With one more game under their belt they have a little more experience, and so hopefully we’ll start seeing more shutouts.”

It was the Mustang defense that helped lead to so many offensive opportunities for Mountain Crest, along with their ability to pass the ball effectively. 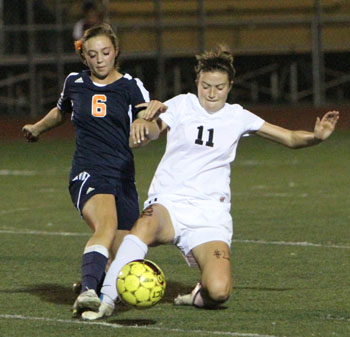