<strong>LOGAN—</strong> The thing about younger siblings, is that eventually they grow up.

That’s exactly what Utah State did Friday night on national television as the Aggies jumped on their Pac-12 brethren from the south early, battled through adversity, and the pulled off a stunning 27-20 victory over Utah in overtime.

“It’s definitely the biggest win I’ve been a part of. Seeing everybody rush the field was incredible,” USU sophomore QB Chuckie Keeton said. “When everybody rushed the field, of course the alumni were down there with us to, and they were just telling us this is the biggest thing that’s happened in a while.”

The win was the Aggies first in the series since taking back-to-back games in 1996 and 1997. It was a momentous victory for a Utah State program that has been on the rise the past few seasons under head coach Gary Andersen, but has yet to record a signature win.

With a 2-0 start to the season and a win over what many touted as a dark horse candidate to win the Pac-12 South division, Andersen and the Aggies now have that win.

“It’s a place where we haven’t been for a long, long time. It’s a place that obviously none of the kids in the program have been in since I’ve been here. To be able to start 2-0 – that’s seven regular season games in a row we’ve been able to win,” Andersen said. “It’s a huge win for the program and it’s something that we had our eyes set on for a long, long time and we were able to accomplish. Obviously, it’s a big, big win.”

Though the Utes defense was the most talked about unit coming into the game, it was the Aggie defense that showed its improvement and depth from a season ago. Led by senior linebacker Bojay Filimoeatu, the Aggies harassed the Utes all night and limited talented running back John White to 96 yards on 27 carries. USU also continually harassed the Utah quarterbacks, and knocked starter Jordan Wynn out of the game in the second quarter with a left shoulder injury.

After a couple of 3-and-outs to open the game for each team, it was the Aggies who drew first blood early in the first quarter. Following an incomplete pass on third down and 18 from their own 33, the Utes were forced to punt. USU brought the pressure at the last minute, and linebacker Zach Vigil came right up the middle and blocked it.

The punt shot backwards and was eventually recovered in the end zone by junior safety Clayton Christensen to give Utah State the momentum and an early 7-0 lead.

Utah appeared to be in business a couple of possessions later, when USU punter Tyler Bennett had trouble with a low snap and fell on the ball deep in Aggie territory. The Utes took over in scoring position, but fumbled a few plays later as Travis Seefedlt fell on the ball to give it back to Utah State.

The Aggies continued to capitalize on the momentum as Keeton and running back Kerwynn Williams ripped off big runs to move USU down the field. Eventually, the drive culminated with a 16-yard touchdown pass from Keeton to running back Joe Hill, but a missed extra point by Brock Warren left USU with a 13-0 lead after one quarter of play.

Keeton and Williams each rushed the ball 17 times on the night, gaining 86 and 95 yards, respectively. Utah State outrushed Utah 164-96 for the game.

That would pretty much end the excitement for the Aggies for the next 30 minutes of game time. The USU defense continued its solid play, only giving up a field goal to the Utes to end the first half as the Aggies carried a 13-3 advantage to the locker room.

Coming out of the intermission, the Utah State offense seemed to be getting back in gear, but a completion to Chuck Jacobs into Utah territory was reviewed and it was determined that Jacobs fumbled the ball and Utah recovered. That would be the first of two second-half turnovers for USU as the Utes clawed their way back into the game.

“I think the one thing that I saw tonight in a young, youthful group, I was excited the way that they continued to play. Adversity kind of struck, and it struck two or three times, and we knew it would tonight. We didn’t’ really have it in game one, but in game two we knew it was going to hit us,” Andersen said. “I thought that they hung in there and they just kept on fighting and kept on battling. I don’t think we caved in on the fronts on offense or defense as the game went on, which was great to see.”

The Utah offense pulled to within three of the Aggies, 13-10, with some trickery in the third quarter. Freshman quarterback Travis Wilson – who had two rushing touchdowns in the Utes’ season opener – came in for backup QB Jon Hays. Wilson handed the ball off to White, who pitched it back to Wilson. Wilson then completed the flea-flicker as he found Kenneth Scott for a 28-yd TD strike.

Meanwhile, the Aggie offense continued to struggled in the second half. Aided by USU’s second turnover, a fumble by Keeton, Utah tied the game on a 40-yard field goal with 4:22 remaining in the third quarter.

After an exchange of punts, the Aggies put the momentum back in their favor with three play, 66-yard drive that took only 44 seconds off the clock with 9:10 remaining in the game. Keeton started the drive off with a 23-yard completion to Matt Austin and ended it with a 4-yard pass to Kellen Bartlett to put USU back on top, 20-13.

Utah battled back though, and again tied the game up on a 24-yard pass from Hays to Scott with 3:19 remaining. With timeouts remaining, the Aggies had plenty of time to make a game-winning drive, but penalties killed USU’s momentum and they were forced to punt with a minute remaining.

The Utes were able to get the ball in USU territory, but stalled out at the Aggies’ 35-yard line. That set up a 52-yard potential game-winning field goal for Colem Petersen who was 2-for-2 on the night. He missed badly twice though – the first attempt was nullified by a Utah State timeout – and the game went to overtime.

USU received the ball first in overtime, and the Aggies appeared to be in trouble facing a third and nine from the 24-yard line. However, Keeton wasn’t about to let this game slip away. With his receivers covered, he scrambled to his left and ran 23 yards down to the 1-yard line.

“It was a dropback pass and they covered everything. We ran the play earlier in the game – it was the touchdown pass to Joe Hill. We ran the same play, and they definitely made an adjustment at halftime,” Keeton said. “They covered it to the fullest, but they didn’t cover me, so I’m thankful for that.”

After a run by Williams on first down that was reviewed but determined to not cross the goal line, he got the ball again on second down and waltzed into the end zone to put the Aggies up by a touchdown.

“I was ecstatic. I couldn’t even contain myself. I ran across the whole back of the end zone. It was probably one of the best feelings I’ve ever had to score that game-winning touchdown,” Williams said.

With things already at a fever pitch, that’s when things got even more interesting. The Utes appeared to tie the game when Hays found tight end Jake Murphy wide-open in the back of the end zone. However, there was a reason he was that wide-open, and Murphy was called for pass interference.

That 15-penaly nullified the touchdown and moved the Utes well back from the goal line. On fourth and goal from the 17-yard line, Hays pass to DeVonte Christopher was incomplete as cornerback Will Davis made the last of his career-high four pass breakups to end the game and begin the USU celebration.

Filimoeatu – who recorded a sack and a career-high 12 tackles – was visibly emotional after the game.

“This game is the world to me. Most of my family members, they’re BYU and Utah fans and its hard for them to go for me because I’m at Utah State. They look upon my team as the little brother of these two,” Filimoeatu said. “Having family members on that team and friends, and players that I played against in high school … just having this moment right here means the world to me. I could never ask for anything more. Just having all my family members in the stands. I can’t explain it, I fell to a knee and I couldn’t move.”

The Aggies get little break in the talent of competition, as they travel to Wisconsin to play their first Saturday game of the season. That game is scheduled for Sept. 15 and will kickoff at 6 p.m. Mountain Time. 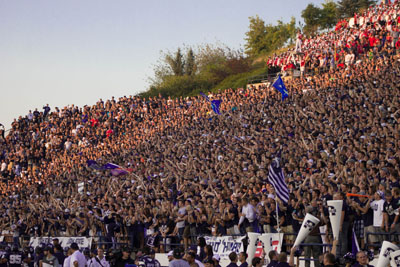