<strong>LOGAN—</strong> After back-to-back losses to open Region 5 play, the Logan girl’s soccer team finally got in the win column with a 2-0 win over Roy Tuesday at Crimson Field.

“We’ve not played to our potential the last two games,” Logan head coach Mitch Peterson said. “We set out to get three points and get a win in region. It’s nice to get this, I feel good about it and I’m happy – in a very controlled way.”

It was all Logan during the first half as the Grizzlies consistently navigated their way inside the 18-yard-box and won three early corner kicks.

Perhaps the Grizzlies best chance came in the 23rd minute when Logan broke through the Royals backline, forcing the goalkeeper out to challenge. The ball bounced into the middle of the box, where junior Becca Godfrey had a look at the open net, but a Royals defender was in the right place at the right time to turn away the shot.

Eight minutes later the Grizzlies had another solid opportunity, but were again unable to capitalize. Godfrey took a long, precise pass through the defense, leaving just the goalkeeper to beat, but a sliding save denied her once again.

“When the girls play their style of soccer, a lot of good things happen,” Peterson said. “There’s a lot of quality out there. I commend Roy. They didn’t give up, didn’t hang their heads. They fought the whole time. They were a good opponent.”

Roy managed just three first half shots, as the Royals struggled to advance into the attacking third.

The offensive onslaught continued into the second half, and in the 55th minute, Jamie Dyer broke through for the Grizzlies. The senior forward took a touch pass in the penalty area and lofted a high arching shot just over the outstretched hand of a leaping goalkeeper into the top-right corner of the net for the 1-0 lead.

“They dropped it back and I knew the goalkeeper was coming out,” Dyer said. “My first instinct was to pound it in, but I knew I had to get it up and over so I did my best to get it up without much length to it. It was satisfying.”

But the Grizzlies weren’t done yet.

Logan dominated possession, sending ball after ball over the defense and into the box. The Grizzlies outshot the Royals 21-4 for the game, but lacked the finishing touch to put the ball in the net.

“It’s all about execution,” Peterson said. “We know what we want to do, we’re just not doing it. We shot all day but barely finished. We have to hit the back of the net and be more efficient in finishing. This was a step in the right direction.”

Senior Taylor Horsley had a big game for the Grizzlies, and had her way with the Royals defense.

On back-to-back possessions, Horsley split the defense and sent a cross in to the box, but the Grizzlies were unable to get on the receiving end to finish.

On top of the finishing woes, Logan struggled with set pieces. The Grizz took six corner kicks during the game, but were unable to record any shots – until the 71st minute.

Senior Alex Hollingsworth sent the corner into the box, and the Roy defense deflected two shots before the ball fell to Caitlin McCuskey inside the 3-yard box. The sophomore midfielder wasted no time toe-punching the ball into the net to seal the deal for the Grizzlies.

“It felt like a team goal because pretty much everyone touched it,” McCuskey said. “It was a great ball, and Veronica tapped it to me and I put it in. It wasn’t just me, it was everybody. It was great since the set pieces were a little bit off today.”

Logan improved to 3-1-6 with the win, including a 1-1-3 record in region play. The Grizzlies travel to Box Elder Thurday to take on the Bees who lost 3-2 at Sky View Tuesday. That game is scheduled to start at 5:15 p.m. 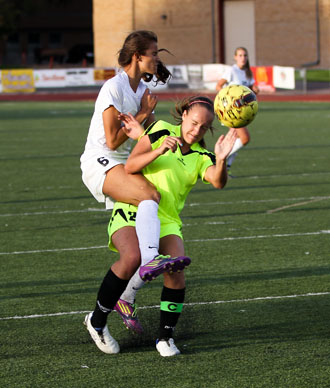