<strong>LOGAN—</strong> Utah State soccer battled its way into the history books, earning its first ever tie against a ranked opponent with a 1-1 double overtime draw against No. 23 Washington Thursday at Chuck and Gloria Bell Soccer Field.

The Aggies are now 5-1-3 this season, earning a tie for the second-straight match after tying Portland State 0-0 last week. Washington is now 7-0-1 as the Aggies are one of only three teams to have scored a goal against the Huskies and tough goalkeeper Kari Davidson. High-scoring Washington has only been held to one goal by one other team this season, Gonzaga, on Sept. 7.

“You know, this is the best result we have had against a top-23 team so it is going to go down in the history books, and we are proud about that. Quite frankly, we can’t help but come away feeling like we should have got a better result. We are bitter about it because we felt like we had chances to win it. So, while it is a great accomplishment, we’re hungry,” USU head coach Heather Cairns said.

“This is the best soccer we’ve played hands down, against the best opponent we’ve played. We feel like we are starting to get our groove. I challenged the team this week and asked them who is going to step up and who is going to make a difference. We had a handful, tons of kids. I could praise every single player that stepped on the field and that is what it is going to take to win a Western Athletic Conference championship, and I feel like we’ve made great strides.”

Washington pressured early, with senior Ashlyn Mulford defending her WAC Goalkeeper of the Week honor with a save in the seventh minute. USU countered with pressure of its own, getting shots off in the 10th minute, but Davidson, who was this week’s national player of the week, made the saves to keep the board scoreless.

Utah State had a three corners in the 23rd, 26th and 30th minutes, but the Washington defense denied any Aggie scoring chances. Junior midfielder Kendra Pemberton had three shots in the final minutes of the first frame, but couldn’t get the ball past Davidson and into the net, leaving the match scoreless at halftime.

Washington had eight shots in the first 45 minutes while Utah State fired off seven. UW’s Davidson made three saves and USU’s Mulford notched two. USU also had a 5-0 cornerkicks edge in the first stanza.

In the 59th minute, junior forward Mari Miyashiro got clear and dribbled down the left side into the 18-yard box and got a shot off that Davidson blocked, but junior midfielder Jennifer Flynn was there for the clean-up to bury the ball in the back of the net from close range for the Aggies’ 1-0 advantage in the 59th minute.

“Oh my gosh it feels great, it really does. To tie a team like that and honestly they had four shots on goal and one was their PK (penalty kick). They scored off of it and good for them but we had 10 shots on goal on the top-23 team in the nation; that feels so good. Our attack has been struggling with scoring. We always wait until overtime to score, but we scored early today and got the first goal. It feels good,” Flynn said.

Washington increased its pressure, countering with a pair of shots after the USU goal, but the Aggie defense held strong. With less than 10 minutes to go, UW launched a free kick from 20-yards out after a USU foul that sailed over the goal.

The Huskies’ pressure earned them a penalty kick with 5:59 to go after an Aggie foul in the box. UW’s Lindsay Elston took the kick and drilled it in the upper left corner just past the reaching arms of a sprawling Mulford and into the net to knot up the score at 1-1.

USU had a couple chances for the game-winning goal in the waning minutes, including junior midfielder Shay Haddow with a long shot that trickled past the goal with just over a minute remaining, sending the match to bonus soccer.

In the first extra session, Pemberton had a long free kick that she lofted a shot on frame but Davidson punched over the bar for a USU corner. Senior defender Natalie Norris connected with a header off the corner but it narrowly missed the goal, keeping it tied.

The second session saw both teams earn scoring chances, but couldn’t amount to the big goal. With just over four minutes left, Pemberton and sophomore defender Taryn Rose both had long shots, but neither got past Davidson and the match ended in the hard-fought draw. 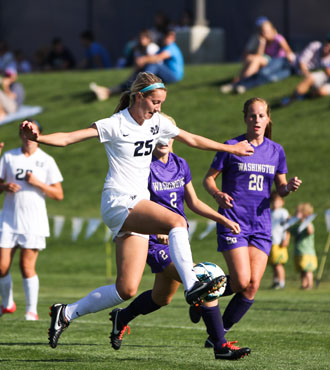