<strong>LOGAN—</strong>The Sky View and Logan girl’s soccer teams played nearly 140 minutes of scoreless action this season, but when the stalemate finally broke the action level was non-stop as the Bobcats pulled out a thrilling 2-1 victory over the Grizzlies at Crimson Field Tuesday night.

SV senior Mckell Martin scored her first goal of the season in the 72nd minute to break a 1-1 tie and lift the Bobcats to the win. Logan goalkeeper Emily Davis came out to meet Martin, but despite getting caught up in traffic, Martin was able to get the ball past Davis just enough that it slowly found its way to the back of the net.

“Oh my gosh, I was so happy. I didn’t think that I could do it, but I just I guess had it in me and scored and I loved it,” Martin said. “I don’t even remember how I got the ball, I just had it, I don’t remember what happened. Then the girl came … then she fell and I don’t really remember her anymore and it just bounced off the goalie.”

Martin’s goal was the second during the final 30 minutes of action for the Bobcats after trailing 1-0 at the intermission. Senior track star Brenna Porter got Sky View on the board in the 62nd minute when she streaked down the left side of the field, beating the defense before crossing Davis and depositing the ball in the back right corner of the net.

“They weren’t going to be denied tonight … we refocused, and we had an intense and strong practice and we carried that over to tonight,” SV head coach Doyle Geddes said. “I don’t know if I’ve ever had a game where I’ve seen the eye of the tiger in my kids like I saw it tonight before this game even started.”

The Bobcats did appear to be the aggressors for most of the first half as they spent the majority of the first 40 minutes on the attack. SV sophomore Jordyn Brown had a great opportunity to score in the 32nd minute, but her shot from in the box deflected off the right upright on the goal.

Despite Sky View’s aggressive play, it was Logan who surprised and stole the momentum heading into the half. Senior Taylor Horsley broke ahead of the Bobcat defense in the 38th minute and was able to beat SV goalkeeper Kylee Hellstern to score the first points in the fierce valley rivalry this season.

The Grizzlies nearly doubled their lead right before the break when they were awarded a place kick with no time on the clock. Hellstern climbed the latter to knock away the shot as it was trying to sneak under the crossbar, but it was tapped into the goal on a rebound. However, the refs had blown the whistle for the end of the half immediately following Hellstern’s stop so the goal was waved off and Logan maintained its 1-0 advantage.

“I think they had three or four legitimate chances at us, and they made the most of one, but I think we had a couple dozen on them and it was just a reflection of my girl’s practice effort yesterday and their determination today to get last week out of their system,” Geddes said.

The final 40 minutes began with scoring chances by both teams, as the first 10 minutes were a back and forth affair. With renewed intensity though, the final 30 minutes belonged to the Bobcats.

“We all just told each other that we need to get to the ball first, we need to play aggressive, we need to win every ball that we can get and just pass it to feet and make it happen,” Martin said. “We just wanted it. We didn’t want to go to double-overtime like we did last game, and so we just pushed it and gave it our all.”

Following Porter’s equalizer, the Grizzlies had a chance to take the lead again in the 53rd minute, but a header from inside the box was stopped by keeper Kaley Brooksby who was in the net for the Bobcats in the second half.

Sky View’s ability to get behind the defense and put pressure on the goal in the second half led to multiple corner kicks, and with that, the momentum clearly shifted to the Bobcats.

“Oh yeah, how many corner kicks did they get in that 10, 12, 15 minutes? Eight? Six? It was just an onslaught, and I was just saying we can’t hold up to that,” Grizzly head coach Mitch Peterson said. “They took that momentum. When they’re getting six corner kicks in a half, eight maybe, they definitely had control and we were on the ropes.”

The game reached a fever pitch in the final minutes when Brown had another shot on goal followed by SV junior Rachel White. Davis was able to corral both of those attempts for the Grizzlies to keep them in the game. With time running out, Logan had one last chance in the 79th minute when Horsley was able to cross the ball into a teammate in the box. Brooksby was up to the challenge though, stopping the shot and sending the Bobcats home winners.

“I’ve had a smile on my face all not long – even though we were down 1-nil, I just knew,” Geddes said. “I saw it at halftime, it was still there. I thought that was an absolutely dominating second half performance.” 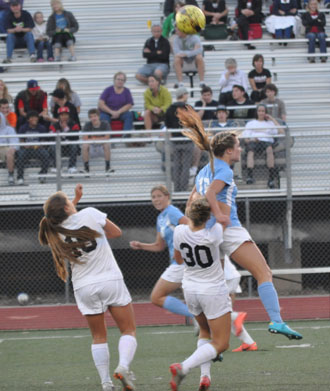