<strong>LOGAN—</strong> The Brigham Young women’s soccer team continued its historic dominance against the Utah State Aggies Thursday afternoon. BYU ran its win streak to seven games with a hard-fought 1-0 victory over the Aggies.

The 12th ranked Cougars controlled possession throughout the game and showed their toughness for the full 90-minute match.

Coming off a 1-1 tie against nationally ranked Washington last week, the Aggies were confident in this week’s match against the Cougars.

BYU got off to a quick start when Dana Cusick scored in the 9th minute from a shot that was taken 25 yards out that barely got passed the outstretched arms of Aggie senior keeper Ashlyn Mulford. That was the only offense created by either team in the match, but there was excitement throughout.

After giving up a quick score, Utah State settled down and got into its groove defensively. Defenders Taryn Rose and Lexie Henrie made play after play denying the potent Cougar offense to keep them in check the rest of the way.

The Aggie offense had a couple of chances late in the first half and missed out on a huge opportunity in the 24th minute when the offense stalled in the scoring box and couldn’t pull the trigger. The Cougars played stingy defense to keep the Aggie offense off the board.

The second half was completely controlled by the Cougar defense. They put pressure on the Aggies and didn’t allow them to keep possession or create any offense throughout the remainder of the match.

“We came out really well and came out as a team with a purpose,” USU defender Natalie Norris said. “They got to us in the first twenty minutes, but after that we came out and fought hard and took it to them. We played well but couldn’t put our chances away.”

Though the Aggies had chances to put points on the board, they again had missed opportunities when Mari Miyashiro and Jessica Hoskin had their shots sail high of the crossbar with time running down.

BYU played great defensively the rest of the way to make sure to keep the Aggies from scoring and secure the win.

“It’s a huge win for us, people don’t realize how tough in-state games are,” BYU head coach Jennifer Rockwood said. “We knew this was going to be a battle. Utah State is very athletic, physical and a well-coached team and they have had a great season so far. They took us out of our rhythm and we struggled a little bit out there, but we did what needed to win the game.”

“I’m really proud of the team and the way they played today,” USU head coach Heather Cairns said. “I was pleased with our offense. You got to give credit to BYU’s defense they are really good. You got to remember, they are a top 12 team. We are playing the best soccer that we can and so we are going to keep rolling with it.” 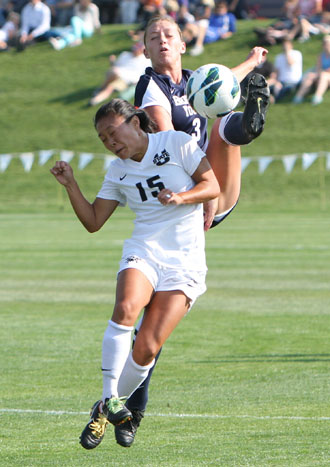