LOGAN – In a game that was expected to see lots of scoring and exciting plays with not a lot of defense, special teams and turnovers would end up being the deciding factors when the Logan Grizzlies met the Roy Royals in a Region 5 thriller Friday night.

The Grizzlies (5-1) ran their winning streak up to five games after overcoming five turnovers and struggling to find their offensive rhythm for their homecoming game.

The Grizzlies offense sputtered right out of the gate when senior quarterback Luke Falk threw an interception on its opening possession deep into Royals territory.  That turnover would be the first of many for the Logan offense as it saw chance after chance to put points on the board go away.

Roy was first to strike with 15 seconds left in the first quarter when sophomore quarterback Tyler Skidmore found wide receiver Connor McGuire wide open in the middle of the field and the two connected for a 52-yard bomb that put the Royals on top 7-0.

After another Logan turnover, the Royals scored again when Skidmore hit senior wide out David Hadley on a 38-yard pass to put Roy on top 13-0 after the ensuing extra point was blocked.

The Logan offense finally started to roll late in the first half when Falk hit senior wide receiver Zack Rich in the end zone on a seven-yard slant to put the Grizzlies on the scoreboard.

After a good defensive stand by the Logan defense, the offense got the ball with just over two minutes remaining in the half. Falk and the offense marched down the field using its hurry-up offense to confuse the Royals defense. Falk found Hagen Andersen, who made an impressive catch, deep in the corner of the end zone with no time left to give the Grizzlies a 14-13 lead heading into half time.

Both the Grizzlies and Royals were plagued by turnovers in the beginning of the second half. Neither team was able to establish any offense besides a lone 32-yard field goal by Royals kicker Ben Aikuli that put the Royals up 16-14.

The fourth quarter got off to quick start as both offenses picked up the pace and both teams went back and forth exchanging scoring drives.  Falk and Andersen connected again, this time a 29-yarder, after the Logan defense picked off a Skidmore pass in Royal territory. After tossing the touchdown, Falk ran up the middle to convert the two-point conversion to put Logan on top 22-16.

The Royal offense would keep up with the excitement when Skidmore connected with wide-open tight end Braxton Patton on an 11-yard touchdown pass that would put the Royals on top 23-22 with just over nine minutes to play.

The Logan offense was again stopped when the Royals defense forced their fourth fumble of the game. The Royals offense took over with just under five minutes left to go and did their best to run down the clock to preserve the win.

That’s when the excitement started.

The Logan defense held the Royals offense to a three and out and forced them to punt on fourth down.  Logan got a great push off the line and Taylor Compton blocked the punt and returned it 41 yards to the end zone with 1:34 left. After another successful two-point conversion, Logan went up 30-23 and held on to preserve the win.

“It was a heck of a game, both teams had chances to win but Logan made the one play they needed to to come out on top,” said Royals head coach Fred Fernandes. “I thought we had a good plan coming into tonight’s game but we just made too many mistakes.”

“We made plenty of critical mistakes. When you can win a game making that many mistakes it’s pretty impressive,” said Grizzlies head coach Mike Favero. “We never gave up and that made the difference. We have been working on mental toughness and this is classic example of it. We hung in there the whole game and made the play when we needed to.” 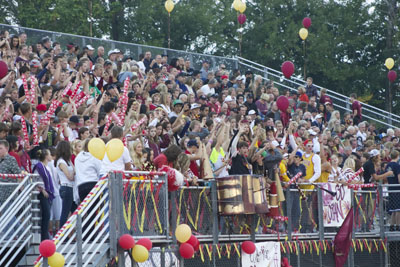