Obviously sophomore QB Chuckie Keeton had a fantastic game Saturday in USU’s 35-13 Homecoming win over UNLV. He completed 20-of-33 passes for 402 yards and four touchdowns – the first USU QB to throw for more than 400 yards since Jose Fuentes in 2002. Despite all the gaudy statistics though, it wasn’t a perfect game for Keeton – as he would be the first to admit.

First off, he was intercepted in the red zone on the Aggies’ second possession of the third quarter. He also underthrew open receivers a couple of times and had three balls knocked down at the line of scrimmage. Finally, Keeton – USU’s second leading rusher – finished with only four yards on the ground. Certainly his evolution as a QB and limiting his hits are important, but there were a couple of plays where he held onto the ball too long or forced throws when the first down was there for the taking.

Las Vegas native, senior running back Kerwynn Williams, had a great game against his hometown team. He amassed 260 yards of total offense, recorded the most receiving yards for an Aggie non-receiver since 1959, and eclipsed the 100-yard mark on the ground for the second consecutive game. He ignited the USU offense on the first play of the fourth quarter after a lackluster third, and was unstoppable on offense pretty much the entire night.

The only negative is that aside from Williams (20 carries) and Keeton (6 carries, but 2 sacks count), USU’s three other running backs that played combined for a total of seven carries and 17 yards. Joe Hill did break off a nice 65-yard gain on a screen pass, but the Aggies need to find a way involve their other running backs – especially Hill – in the ground attack more.

Senior Chuck Jacobs had his best game of the season as he hauled in four catches for 101 yards and two touchdowns. His first score of the night, a 50-yarder, involved a lot of will on his part to spin out of a tackle from two defenders and race into the end zone. If the grade were based on Jacob’s performance alone, then it would be an “A” – however, there is more than one receiver on the USU roster.

What’s unnerving is that if you take out the receiving yards by the running backs – a combined 233 yards – and the tight ends – a combined 44 yards – then the USU receivers outside of Jacobs combined for three catches for 46 yards. Two of those three catches were by Travis Reynolds, while one was by JoJo Natson for 22 yards on the second to last play of the game. In a game where the USU offense tallied 424 yards through the air, leading receiver Matt Austin was held without a catch. That is a cause for concern.

Having already lost senior tackle Oscar Molina-Sanchez for what looks like the season, the Aggies also lost their All-WAC center Tyler Larsen to an ankle injury during the Homecoming game. Despite that, USU’s young line rallied and gave Keeton the best protection he’s had since the season opener. Keeton was still sacked twice, and a missed assignment led to Williams fumble on the opening play of the second half, but overall the USU line played well and is coming together. The fact that every lineman that was playing in the second half of the UNLV game will return next season is a huge positive for the Aggies.

The Aggies held UNLV to less than 200 yards passing Saturday, picked off Rebel quarterback Nick Sherry to set up a field goal to end the half, and played the deep ball better – especially Nevin Lawson – in avoiding unnecessary pass interference penalties. Senior corner Willie Davis nearly had a pick-6 for the second consecutive game, and the Aggie defense on the back end allowed them to pressure the quarterback all night. The group also recorded six pass breakups during the game.

Despite the loss of NFL draftee Bobby Wagner and the experienced Kyle Gallagher from last year’s squad, the USU linebacker corps had a lot of excitement coming into the 2012 season. The group has lived up to the hype, and really solidified the best Aggie defense in the modern era.

Jake Doughty led USU against the rebels with a game-high 13 tackles, and he was followed closely by Zach Vigil who also recorded double-digit stops with 10. Senior Bojay Filimoteatu and freshman Kyler Fackrell each had solid games as well, as each recorded a tackle for loss – Fackrell’s being for a safety.

In their previous four games UNLV had been pretty solid in pass protection only giving up seven sacks. The USU defensive line recorded 2.5 of the 3 sacks the Aggies had against the Rebels, and logged two quarterback hurries as well. Al Lapuaho’s sack in the fourth quarter also buried UNLV at its own one yard line, which set up Kyler Fackrell’s safety on the ensuing play.

The USU defensive front was also key in limiting UNLV running back Tim Cornett to a season low in rushing yards. Cornett – the No. 12 rusher in the nation coming into the game averaging 117 yards per contest – finished with a dismal 36 yards on 17 carries.

Overall, the special teams was very positive for the Aggies against UNLV. Josh Thompson was 2-for-2 on field goal attempts (32, 31), though he did miss his first PAT as an Aggie. Tyler Bennett had a stellar day punting as his five kicks averaged 47.4 yards (long of 59) and all ended up inside the 20. Cam Webb didn’t really have much success on punt returns, and put the ball on the ground once, but didn’t lose it. Chuck Jacobs also had a big 39-yard return on the free kick following the safety.

The Aggies did allow UNLV to return four kickoff returns on the night, but only for an average of 17 yards. USU head coach Gary Andersen said he was pleased with the kickoff coverage, which didn’t allow the Rebels to get across the 25 yard line, but would prefer to see the kickoffs just go out of the end zone. 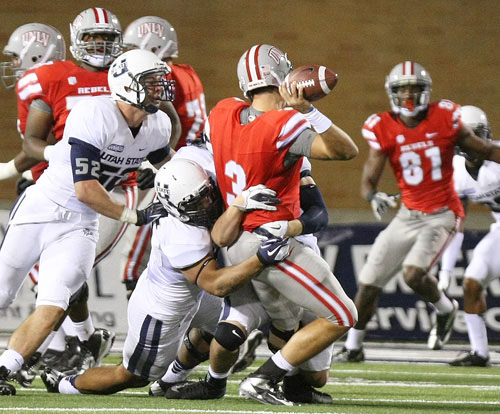