<strong>LOGAN—</strong>With USU football off to its best start in decades and BYU sporting one of the top defenses in the country, the anticipation for Friday’s game between the two rivals may be at an all-time high for fans of both schools.

Utah State has long viewed the Cougars as a hated rival, while Brigham Young has invested most of its rivalry energy toward Utah. However, conference realignment has broken the Utes and Cougars apart, while the Aggies increased level of competition has certainly heightened the intensity of this in-state game.

Each of the past two games between the schools has ended with the home crowd of the respective institutions rushing the field. Each of those games was viewed nationally on ESPN, and last year’s game was voted as the best Friday night game of the season after BYU stormed back to win on a tipped touchdown pass with 11 seconds remaining.

With the rivalry becoming more heated, fans and pundits from both schools have been pronouncing loudly why one team is better than the other. A closer look at both teams though, reveals that these teams are far more similar than either fan base would like to admit. One thing is true for both the Cougars and the Aggies – they will be facing their toughest opponent up to this point of the season on Friday.

Both Utah State and BYU sport some of the toughest defenses – at least statistically – in the country. Brigham Young is No. 5 in the country and is holding opponents to a ridiculous 226.6 yards per game, while USU is just outside the top 10 at No. 11, holding opponents to 280.8 yards per game. The Aggies and Cougars are holding their opponents 52 yards and 113 yards below their season averages, respectively.

As great as those statistics are, the jury is still out regarding how good either of these defenses really is. Both USU and BYU have played four FBS opponents this season. Nationally, the combined offensive ranking of BYU’s opponents is 95.5 – the combined offensive ranking of USU’s opponents is 101. The best offense the Cougars have faced is Boise State (No. 72), while the best offense the Aggies have faced is UNLV (No. 80). Needless to say, neither team has faced a top-tier offense yet.

While the defenses for both schools haven’t faced a team ranked in the top half of the country, the offenses for USU and BYU have seen some stiffer competition. Both teams have faced off against Utah, who is ranked No. 29 in total defense, and the Aggies played at Wisconsin (No. 39), while the Cougars played at Boise State (No. 23). When the average ranking of both the Aggies and the Cougars FBS opponents are added up, the number is nearly identical (59.5 and 60.25).

When comparing the Aggies and the Cougars though, the best thing to do may be to look at the common opponent for both schools – Utah. Utah State jumped out early on Utah, never trailed, and defeated the Utes in overtime, 27-20. BYU on the other hand, fell behind big early, rallied late, and missed two last-second field goal attempts that would have won the game. The Aggies got the Utes at home, the Cougars played them on the road.

On the season, the Utah offense is averaging an anemic 298 yards per game. The Aggies gave up 325 yards to the Utes – 96 on the ground – while the Cougars allowed Utah to gain only 245 total yards – 49 on the ground. However, BYU’s ability to shut down the Utah running attack does come with an asterisk, as leading rusher John White missed that game with an injury he suffered late in the game against USU. In last year’s game in Provo, White rushed 22 times for 174 yards and three scores.

Defensively, the Utes are giving up 329.5 yards per game. Utah State was able to tally 380 yards against Utah (216 passing, 164 rushing) when they met in Logan. The next week in Salt Lake City when the Cougars visited, they put up 312 yards of total offense against the Utes (206 passing, 106 rushing). Again, not a massive differential.

Numbers and statistics can be used to make a positive case for either school to win Friday’s game. The bottom line though, is that the two teams appear to be pretty evenly matched. Ultimately, the national audience that tunes in should once again be treated to a great game between in-state rivals. 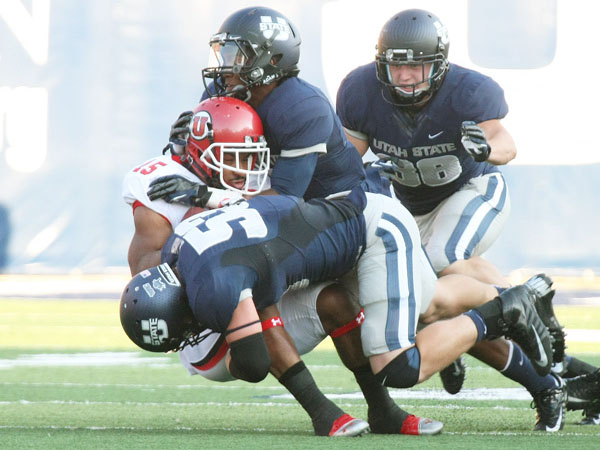