<strong>LOGAN—</strong> It’s just another game. We’re just taking it one game at a time. We treat all of our opponents the same. We just have to focus on what we can do and not worry about them.

These are just some of the many sports clichés coaches and athletes use when talking about their upcoming opponents. Occasionally though, there are those moments when honesty wins out and true emotion shines through.

“Every game, coaches say you take it step by step, but it’s BYU. It’s an in-state rival game. I think we’ve made it bigger than it has ever been after beating Utah … it gives us a chance to take Utah. We can be the best team in Utah, and I think everybody knows that,” senior linebacker Bojay Filimoeatu said. “I think everybody is feeling that loss from last year, and we’re still feeling that loss from Wisconsin, so we still want to give it to somebody – and BYU is it.”

Utah State coaches and players may be playing it coy with the majority of their remarks about Friday’s game, but make no mistake, this one has been circled on the Aggies’ calendar. Besides the simple fact that the game is against an in-state rival, the Aggies – as Filimoeatu mentioned – have not forgotten about last year’s loss in Provo.

The Aggies have lost 16 straight in Provo going back to 1978, but led by 11, 24-13, with less than 11 minutes to play in 2011. However, former USU quarterback Riley Nelson took over for the struggling – and now departed – Jake Heaps and led the Cougars to a thrilling last second victory over his former team. Despite USU being off to its best start in more than 30 years, that loss still stings.

“Last year I had the opportunity to finish off the game with the winning sack, and then I kind of whiffed,” Filimoeatu said. “(Nelson) rolled out and threw that amazing pass. This year I think we’re more prepared.”

Another player who hasn’t been shy about his excitement at getting another shot to beat the Cougars in Provo is USU senior safety McKade Brady. Brady, a former track star at BYU, was excited about his return to Provo in 2011. However, the Sky View product was ejected early in that game when he was whistled for “targeting” a receiver. Replays clearly showed Brady’s hit to be nothing more than a hard shoulder-to-shoulder hit – not even worthy of a penalty – and his absence from the secondary hurt the Aggies late in that game.

“I got a lot of texts with the picture and it looked like shoulder to shoulder to me. I don’t feel like I deserved to be ejected, but sometimes that’s just the way it goes and you have to roll with it,” Brady said. “It was really frustrating. I had a lot of friends there – going to school there I obviously knew a lot of people there. I had like 50 text messages after the game, so people were just mad about me getting kicked out and wanting to see me play. Definitely frustrating.”

USU head coach Gary Andersen – who’s contract was extended Thursday through 2018 – still has the photo of the hit that led to Brady’s ejection on his phone.

For Brigham Young, this game is equally important. The Cougars sit at 3-2 on the year, and already have one loss to an in-state opponent – an opponent the Aggies defeated earlier this season. A loss would drop BYU to 3-3 with a home game against undefeated and ranked Oregon State looming. Following the game against the Beavers, the Cougars close with four of their final five games on the road.

Maybe the most important thing at stake in Friday’s game is recruiting. With the late start, most high school players will be able to catch at least the second half following their games. The USU-BYU game is also being televised nationally on ESPN. However, the local level will be the focal point.

This year, the Aggies have more players from the state of Utah than any other FBS program in the state with 55. Brigham Young has 43 players from Utah on its roster, and the Aggies and Cougars – at least since the arrival of Andersen – often battle for the same recruits.

“I don’t know how many in-state kids BYU has, but I know it’s a priority. Obviously, they have an extensive missionary program and a lot of Polynesians on their team, so we cross paths quite a bit when it comes to that,” Andersen said. “So, we know a bunch of their kids and a bunch of their families. That is what makes it great. That and the fact that it’s become a competitive football game make it even better.”

Impressions are made quickly on the younger generation. A new Nike designed logo and uniforms, a hot coach, a new conference, and brand new facilities are nice cards Andersen has to approach new recruits with. A 3-1 record over the past three seasons against the traditional powerhouse football programs in the state would be an ace in the hole. 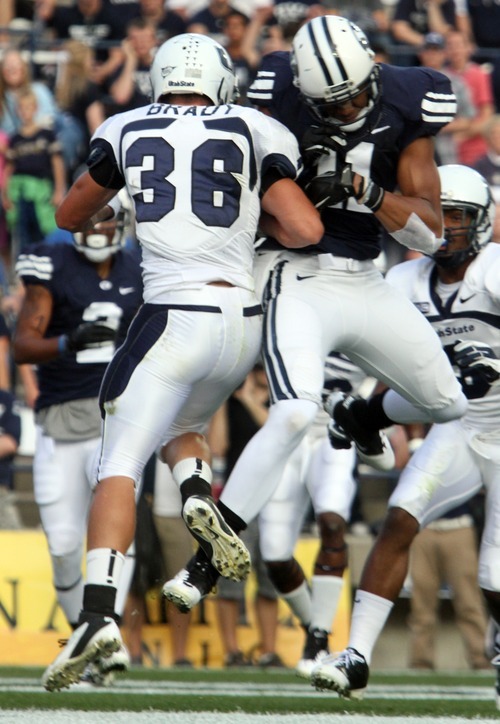 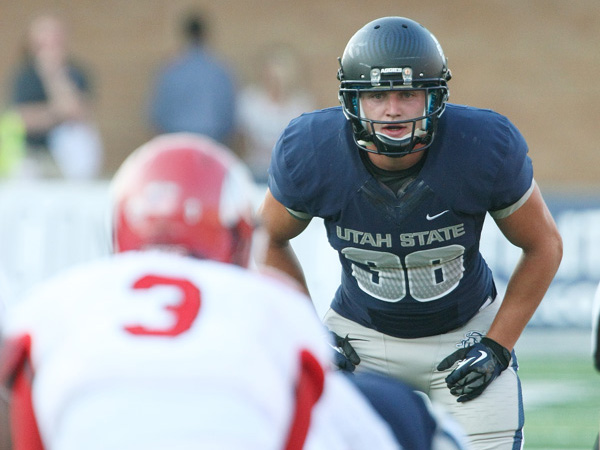