<strong>LOGAN—</strong> Friday night’s 6-3 loss at BYU was an ugly affair that showed just how far the Utah State offense still has to go. However, it did provide evidence of something I’ve been saying since fall camp – the USU defense will have the Aggies in every game this season.

The Aggies have been one of the best defenses in the nation, consistently ranking inside the top-20 nationally in nearly all statistical categories. Coming off of last week’s game, USU is now ranked No. 8 in the country in scoring defense, as the Aggies are only allowing opponents to score 12.3 points per game.

Utah State has also held opponents scoreless in the first quarter so far this season, outscoring them 54-0. That is an amazing statistic, and has allowed the Aggies to either build an early lead, or get their feet under them and weather an early storm. Only twice has USU trailed in the first half this season. The first time came early in the second quarter against UNLV – something the USU offense quickly remedied – and the second came last week against the Cougars, as BYU scored its only points of the game with three seconds remaining in the half to take the lead.

Overall, USU’s defense is ranked No. 16 in the country in total defense after six games. The Aggies are giving up less than 300 yards of total offense per game. Where Utah State has really made a statement though, is in the red zone. USU is the No. 8 red zone defense in the country, only giving up a score on 63 percent of its opponents possessions.

That number is huge, especially considering how often the USU offense has given the ball to the opposing team in or near the red zone. Just last week, Aggie QB Chuckie Keeton fumbled the ball at the USU nine yard line to begin the second half. Solid defense and some self-implosion by BYU led to USU stuffing JD Falslev for a 16-yard loss on a fourth down fake field goal attempt. The Aggies got the ball back and didn’t even give up any points.

Similarly, the Aggie offense turned the ball over in its first two second-half possessions against both Colorado State and UNLV. The USU defense bowed up limiting the Rams and the Rebels to only field goals on each of those possessions.

The Aggie offense has been a bit feast or famine this season, starting with its very first game. USU dropped 21 points on Southern Utah in the first quarter of that game, only to be held scoreless in the second quarter. Against UNLV, the Aggies were held scoreless in the first 15 minutes, and then ripped off 20 points in the second quarter of that game. It has also disappeared for long stretches of games.

In the Aggies home win over Utah, they couldn’t generate any points in the second or third quarters. On the road at Wisconsin, the Aggies built a 14-3 lead at the break only to lose by two after failing to score a point in the second half. Last Friday against BYU, the Utah State offense never got on track, failing to eclipse 250 yards of total offense.

Back to the original point of this article though, which is, the Utah State defense will keep the Aggies in every game they play this season. I think the offense hit rock bottom at BYU, and I don’t expect them to have a performance that bad the remainder of the season. The offense will most likely still have its hot and cold moments though, and during those quarters where it’s cold, the defense will hold strong.

That is good news considering the 2012 (and final) version of the WAC appears to be tougher than anyone anticipated. Three members of the league not named Utah State are a combined 14-1 (Louisiana Tech, San Jose State, and UTSA), with the Bulldogs being ranked and the Spartans receiving votes. Louisiana Tech is averaging a ridiculous 53.2 points per game (No. 3 in the nation), while SJSU is putting up 30 points a game. USU faces both those teams on the road and will need its stout defense.

We’ve reached the midway point of the season – more than enough time for patterns to emerge. I expect the Aggie defense to continue the play that has led to its best statistical season in decades. If they do continue to play to that level, the wins will continue to come. 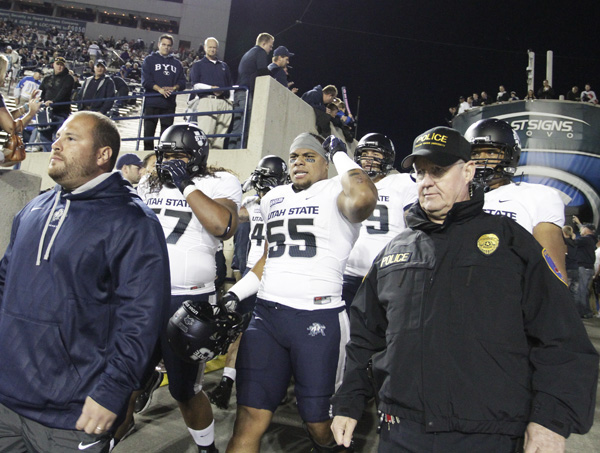