“This team is the best you can get, these are seriously my best friends and I don’t know what I would do without them, and it’s so sad this is my last time playing on this court with them,” Day said.

The match started out with the Bobcats taking a 7-1 lead. Logan fought back to cut the lead to 9-6 and kept the set interesting trailing by no more than nine points. Sky View finished off the set with a 25-17 win.

“Everybody wanted the night to be perfect for the seniors,” SV head coach Malayna Knowles said. “Right from the beginning they had just one goal in mind. They work hard in every practice and set such a great tone for all the younger kids, they’ve just been fabulous.”

The second set was full of ties and lead changes, as neither team had a lead of more than five as Logan led the set 14-9 before a ferocious rally by the Bobcats to tie the set at 17. Logan then took a 22-19 lead, but Sky View rallied again tying the set at 22. Both teams were even again at 25 before SV scored the final two points of the set for a 2-0 lead.

“It was an up and down match for us.” Logan head coach Dan Noack said. “We struggled with servicing in the first and third set and that was really our dagger.”

The third set looked to be another barn burner as the teams were neck and neck as Sky View lead 7-4, but the Bobcats made a huge run taking the score to 21-9. Logan stuck around and cut the 12 point lead to 24-16. However, the region leading Bobcats were too much, and finished of the match with a 25-17 win.

Day finished the match with 11 kills adding to the team total of 29. Webb led Sky View with six aces, while Sammy Cox led the team with 13 digs.

“It was kind of a bitter sweet feeling, but it was fun because everything we did tonight was for the team,” Webb said.

Following the UEA weekend, SV will finish off its regular season with another valley rivalry as the Bobcats travel to Mountain Crest on Wednesday, Oct. 24. Logan will return home for its Senior Night against Bonneville that day. Both games are scheduled for 6 p.m. 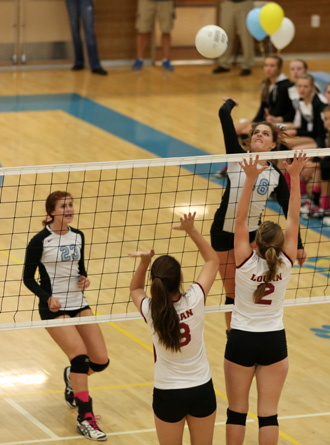