<strong>LOGAN—</strong>With a win Saturday, the Utah State University football team will become bowl eligible. Take a minute to let that sink in.

The Aggies haven’t had back-to-back 6-win seasons since 1996 and 1997. It’s been much longer since USU went to back-to-back bowl games, as that hasn’t happened since 1960 and 1961. Though a win in the annual “battle of the Aggies” won’t guarantee Utah State a bowl bid – the WAC only has one tie-in for the conference champion – it is still a milestone for USU football.

“We walked out at the very beginning and we wanted to be able to get to a bowl again and obviously becoming bowl eligible is a big part of that. We want to win a bowl game and we want to get in a position to contend and play and win a WAC Championship,” USU head coach Gary Andersen said. “We have put ourselves in decent position at 5-2, and to be bowl eligible with a bunch of games left would be a big accomplishment for this group of kids.”

Coming off a big road win, the Aggies’ fourth road game in their last five contests, USU returns home to face another Aggie team that is headed in a very different direction. New Mexico State, a team that will be playing independent for the foreseeable future without a conference, has lost five straight games and has looked downright terrible against FBS competition.

The visiting Aggies are coming off a bye week, but are already 0-2 in WAC play with losses at home to UTSA and on the road at Idaho. Despite the differing directions of the programs, NMSU has played well against USU since Andersen took over and the coach knows this could be a trap game for his team.

“I am always on guard and I am paranoid. The way I state that is every week, these kids know me well enough now that if I sense anything at all that is negative, I am going to address it right out of the gate,” Andersen said. “They know that I hope I am wrong when I am making those statements to them. I will address that with them today and I hope that I am wrong. I think it needs to be thrown out to them especially as a young crew that needs to keep their sword sharpened.”

Despite recording a school record 13 sacks in the Aggies’ game against the Spartans last week, USU did give up 467 yards against the best passing team it has faced so far. New Mexico State is also led by its receiving corps, and the red Aggies will no doubt be trying to take advantage of Utah State’s secondary as well.

“Definitely if I were them watching film, I’d plan on throwing it. I think we’re going to try to run a little bit more man, but at the same time I know they do have a nice receiving corps too – (Austin Franklin) and (Kemonte’ Bateman), are nice, and (Franklin) is having an incredible year personally for himself,” USU senior corner Willie Davis said.

Franklin, a former USU recruit, is leading NMSU with 42 catches on the year for 742 yards and seven touchdowns. He is averaging 123 receiving yards a game, and will no doubt be a focal point of the New Mexico State offense.

Part of the Aggies’ struggles in the secondary against the Spartans though can be directly related to what allowed USU to get so much pressure on SJSU quarterback David Fales. USU defensive coordinator Dave Aranda said that the Aggies switched to a predominately zone coverage – something they hadn’t done much this year – in an effort to confuse Fales and get more pressure on him. The ploy obviously worked, but when pressure didn’t get to Fales, things switched into his favor as he was able to pick apart the Aggie zone.

Aranda and the Aggies expect to return to a more man-based defense this week against New Mexico State, and for really the first time this season, the USU offense is expecting to see a lot of man coverage as well.

“They have a pressure defense and they will come after us, they always do. They like to change it up and show you some different fronts, so it is a difficult defense with his background in the defensive side of the football to get prepared for,” Andersen said. (They play) a lot of man, which is something that we have not seen a lot of this year, so it will be a little bit different for us to be able to prepare for and again the pressure that they bring, pressure in a lot of different ways from a lot of different spots.”

Andersen’s worry of a trap game aside, New Mexico State is ranked 93rd in the country in total defense, as the red Aggies are giving up 441 yards of offense per game. NMSU is even worse in scoring defense coming it at No. 100 in the nation and giving up more than 33 points a game. For a Utah State offense that is coming off its best performance of the season, those numbers have to be comforting.

“We know we’re real, and we know we’re really good, and we’ve just got to go in and realize we have to play that way to be good, it’s not just going to happen,” Davis said.

Saturday’s game will be Romney Stadium’s first afternoon game of the fall season, and will kickoff at 1 p.m. The game can be heard live on 610 AM and 95.9 FM with the voice of the Aggies, Al Lewis, on the play-by-play. The audio can also be streamed live on 610kvnu.com. The game will be televised locally on KMYU. 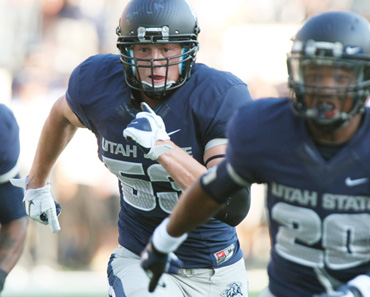