“We played a lot of people,” head coach Stew Morrill said. “I was pleased to get everybody some time. It served its purpose. It’s an exhibition game, and you’re trying to find out some things about your team.”

The Aggies jumped out to a 19-6 lead in the first nine minutes and never looked back.

“I felt like for the first game of the season it was an awesome performance,” USU junior guard Preston Medlin said. “We came out, we played really hard and played great defense, and that’s one thing that coach always stresses to us. We also got a lot of boards.”

“He was about the only guy that could score there for a little while,” Morrill said. “It was nice not to have to play him too much in the second half. He’s going to have a lot of games where he plays a lot of minutes. He just makes plays. He makes plays for himself, he makes plays for others. He’s a good basketball player.”

Forward Jarred Shaw added 15 points and eight rebounds in his first game playing for the Aggies.

“He did awesome,” Medlin said. “He had a great game. He was physical, he was getting rebounds and he was making good post moves. That is everything that we need out of him, so if he can keep that up during the season he’ll be a big player for us. I feel like he’s making the transition well and learning what coach Morrill wants him to do.”

Shaw and the other Aggie big men held the Antelopes to only 10 points in the paint, while USU scored 32.

Shaw transferred from Oklahoma State and sat out last season to become eligible to play for Utah State.

“It had been a whole year so I was anxious to get out there,” Shaw said. “I missed a couple shots in the beginning but in basketball you can’t get down. You have to just keep going. I felt like I kept going and they finally started falling for me. Coach said to just relax and play hard on the defensive end and shots will fall.”

After leading 36-22 at halftime, Utah State went on a 26-4 run over a 13-minute span during the second half to seal the game. USU shot 44 percent from the field for the game and went 23-of-25 from the free throw line.

“They are a good Division II team,” Morrill said. “It was a lot better than some exhibition games we could have had.” 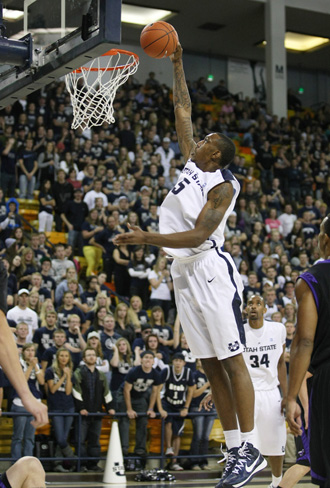