Medlin scored 18 points on 6-of-10 shooting, while Jarred Shaw chipped in 12 and Kyisean Reed and Marvin Jean each added 11. Jean was effective beyond the arc as he hit 3-of-4 3-point attempts, while Reed tallied four dunks – including a Sportscenter Top-10 worthy alley-oop from Medlin.

“I think tonight was really good,” Reed said. “We did a lot of good things, especially offensively. We still have a long ways to go.”

USU head coach Stew Morrill agreed that the Aggies still have a lot to learn.

“I didn’t think our execution was great,” Morrill said. “I think we’ve got a long way to go in some areas. Nothing against Simon Fraser, but we were just able to score easily. A lot of it wasn’t out of execution. Now we still had to make shots, but we just did what we had to do. It’s time to move up in competition and that’s what the regular season will bring.”

Simon Fraser is located in British Columbia, Canada and is the only non-American university to be a member of the NCAA.

“They are hard to play,” Morrill said. “Foreign teams play different. They cut differently, they are really active and they make unorthodox type plays. We didn’t handle those as well off the dribble as we’d like to and we lost our man sometimes.”

TeNale Roland, a junior point guard in his first season with the Aggies, had nine assists and three steals with only one turnover. Roland also added nine points for Utah State.

“Guys were knocking down shots,” Roland said. “They were running the floor well and I was able to get it to them when they were open.”

Utah State received some energy early in the game thanks to some stellar above-the-rim plays by Reed. While all four dunks of his got the crowd off their feet, Reed’s alley-oop from Medlin got the loudest reaction.

“It gets my teammates going,” Reed said. “It gets the crowd into it. They are easy baskets, so that’s good too.”

Morrill was happy with the performance of USU’s lone senior.

“Kyisean was really active,” Morrill said. “He’s unbelievably athletic on some plays. He causes havoc out there with his athletic abilities.”

Utah State shot a stunning 70 percent from the field in the first half and held SFU to only 34 percent shooting during that time. The Aggies had 40 points in the paint and allowed only 16 to the Clan. USU’s bench scored 36 of the team’s 92 points.

“We have a lot of depth this year,” Roland said. “We have some shooters that come off the bench and the bench really helped us today.” 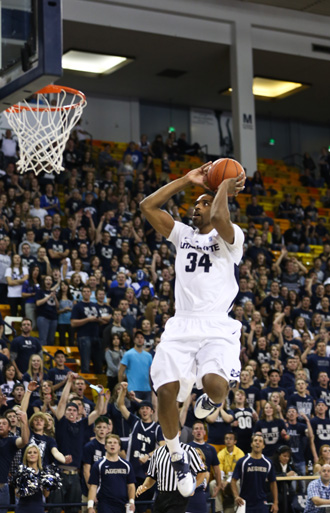