<strong>LOGAN–</strong> It’s no secret that the more experience you have with something, the better off you will be. Extra time to learn and grow is always an advantage, particularly in football.

Utah State senior wide receiver Matt Austin has learned that just about as well as anyone. Though he may not have understood it at the time, the trials he has gone through and the extra time that has given him in Logan have combined to make him a stronger and more powerful football player.

Austin came to Utah State in 2009 and has since spent as much time on the sidelines working back from injury as he has on the field. After transferring from Mt. San Antonio Junior College, he redshirted his first season as an Aggie with a foot injury.

He was ready to go for the 2010 season and started the season opener at Oklahoma. On his first catch of the game, a 59-yarder from quarterback Diondre Borel, he went down with a knee injury. His season was over as quickly as it had begun. He was granted a medical redshirt and spent another season on the sideline.

After that season, Austin came back for what could have been his only year to see action. He was bound and determined to make the most of what he had.

Austin played in all 13 games in 2011, making eight starts. He tallied 34 catches for 465 yards with six touchdowns, leading the Aggies in all three categories. Two of those touchdowns won games for Utah State, scoring in the final minute of play in both the San Jose State and New Mexico State games.

Luckily the Western Athletic Conference, the NCAA and the USU compliance office worked together to secure an extra year of eligibility for Austin so he could return for his true senior season.

“ I’ve grown a lot in my years here. Sitting out for those first two years helped me learn more about the game,” Austin said. “ I’ve been here forever, so it’s just a growing process that has helped me a lot.”

Austin has taken full advantage of his opportunities and has made an impression on the field this season as he ranks second on the team in both receptions (42) and receiving yards (652), while being tied for first in receiving touchdowns with five.

“He’s fought through trials and tribulations to come back and put on the great performance that he has. Anytime you have a guy like that, it’s huge to the group,” said wide receivers coach Jovon Bouknight. “There are not a lot of guys who could come back from injury and do that the way he has.”

Throughout his injuries, Austin did the best he could to stay involved and remain a part of the team, even though he couldn’t play.

“It was hard to stay involved. It’s tough to come to practice and be around the guys and watching them play, when there’s nothing you can do,” Austin said. “I got used to it and started coming around more. I had to come and watch film by myself and learn the system on my own without playing.”

Austin cites that time on the sidelines as a key part in his development as a player and the leadership role he plays now.

“I spent a lot of time around the coaches and the players and learned how to be a better leader,” Austin said. “Being on the sidelines and cheering my team on was fun, but those injuries put me in the right position.”

Bouknight, speaking for the coaching staff, recognizes the influence Austin has on other players and the things he has learned from his extended football career.

“He’s been around a lot of players and understands where we came from and where we’re going,” Bouknight said. “He’s been able to take both sides and be that guy who will go motivate. He gets guys back on track who are facing adversity.”

“I see myself as being one of those guys you can count on. I’m someone you can go to on or off the field if you need something. I do my best to help anyone out in any way,” Austin said. “Being one of the older guys on the team, makes you a leader. I have to push the younger guys and leave a stepping stone for them to get where they need to be.”

This season’s seniors have seen a drastic change in both atmosphere and performance as they have gone through their college careers. As the program has grown and developed under head coach Gary Andersen, they have come to truly appreciate the success the team is seeing.

A huge motivator for the team has been the increase of fan support in the wake of the team’s success this season.

“The fanbase, outside of the football, is what I love the most. Being a part of the team and the system is great, but knowing the fan-base is there and helping us out is what we all like,” Austin said. “We do it for the fans and for the people that doubted us.”

Austin has worked hard to defy the odds and statistics as laid out by his doctors, his doubters and others who have been in the same situation.

“Don’t ever let anyone tell you you can’t do something. I thought I was done, from the different doctors and research and things like that. They were telling me I was done and couldn’t come back,” Austin said. “If you work hard, anything is possible. I really didn’t believe that before my injuries happened. I was lazy; I didn’t really care. Those injuries helped me grow and helped me process that anything is possible.” 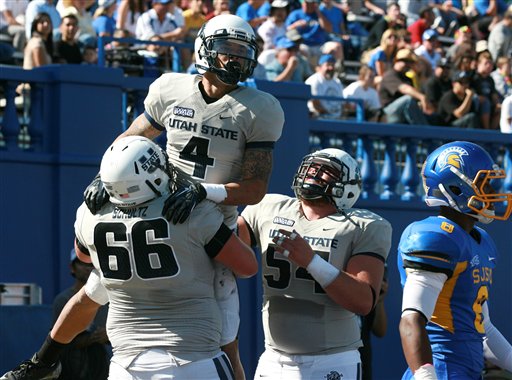