<strong>PROVO—</strong> Another buzzer beater, another heartbreaker for Utah State.

The Aggies battled in-state rival BYU, and fell 70-68 as the Cougars’ Craig Cusick grabbed an offensive rebound and put in a shot with 0.2 seconds remaining. Utah State had a desperation attempt but the tip went hard off the glass and BYU walked away with the win.

“It’s just one of those games where a couple plays here and there and it’s a different outcome,” Utah State head coach Stew Morrill said. “If we make some free throws it sure would have helped. Looking at the stats we did a lot of things right. Our defense was pretty good, our rebounding was pretty good. We turned the ball over way too much and missed free throws, that’s why we got beat.”

“I’m disappointed,” Butterfield said. “I thought we fought back when we were down early. We pulled together as a family and just came so close.”

Shaw started the game with an emphatic dunk after stealing the ball from BYU’s Brock Zylstra. The junior center didn’t stop there as he scored Utah State’s first nine points and was the only Aggie to score until Butterfield made two free throws with 12:55 left in the first half.

Utah State struggled from long range throughout the first half. The Aggies were just 2-of-13 from behind the arc in the opening 20 minutes, for a dismal 15 percent.

The referees were calling it close for both teams. There were 10 fouls called in the first five minutes of the second half – something that didn’t bode well for the shorthanded Aggies, who had five players with four fouls through the last three minutes of the game.

“Our guys fought really hard in the second half,” Morrill said. “We were in full scramble mode with so many guys in foul trouble that I thought we might have to play our walk-on guys. I didn’t know if we were going to have a point guard left.”

BYU’s Matt Carlino made a layup with just less than eight minutes to play to extend the Cougar lead back to nine, however, Butterfield then hit a 3-pointer and Jean made a bucket to keep things close.

Cache Valley native Jordan Stone had a career high nine points for the Aggies and caused the Cougars problems all night as he played tough defense and frustrated BYU inside.

“The second half we definitely came back,” Stone said. “We were working harder, just what we need to do. We only have eight guys or nine guys and we’ve got to work as hard as we can to make up for the people that we’re missing.”

After a couple of USU turnovers – the Aggies had 18 of them – the Cougars held a 68-63 lead with 1:48 remaining. Ben Clifford nearly lost the ball, but was able to find an open Jean who nailed a bucket from behind the arc. Butterfield then grabbed a defensive rebound and was fouled in transition with a chance to tie the game with less than a minute on the clock. He hit both free throws to tie the game at 68 apiece.

As a team, Utah State finished only 17-of-27 from the free throw line, while BYU connected on 23-of-33 from the charity stripe.

After Butterfield’s free throws, the Cougars worked the game clock down to the final seconds when Carlino pulled up from deep at the top of the key. His shot was well short, but the rebound came right to Cusick he got off the game-winning shot without ever touching the ground. Shaw – the Aggies’ 6-foot 11-inch center – was out on the play, having fouled out just a minute earlier.

“Give BYU credit,” Morrill said. “They made a heck of a play at the end of the game and there you go.”

The Aggies return to action Saturday, Feb. 23 as they play host to the Illinois State Redbirds in the ESPN Bracketbusters at 7 p.m. 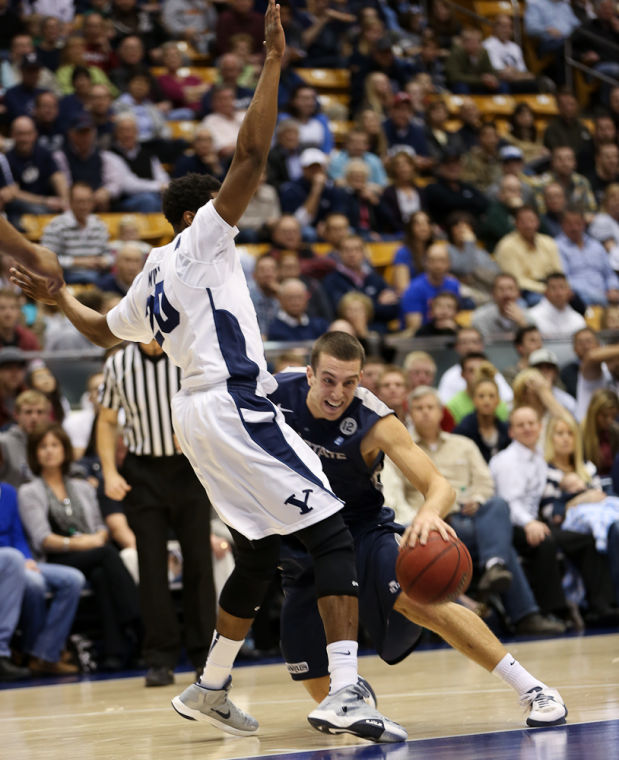 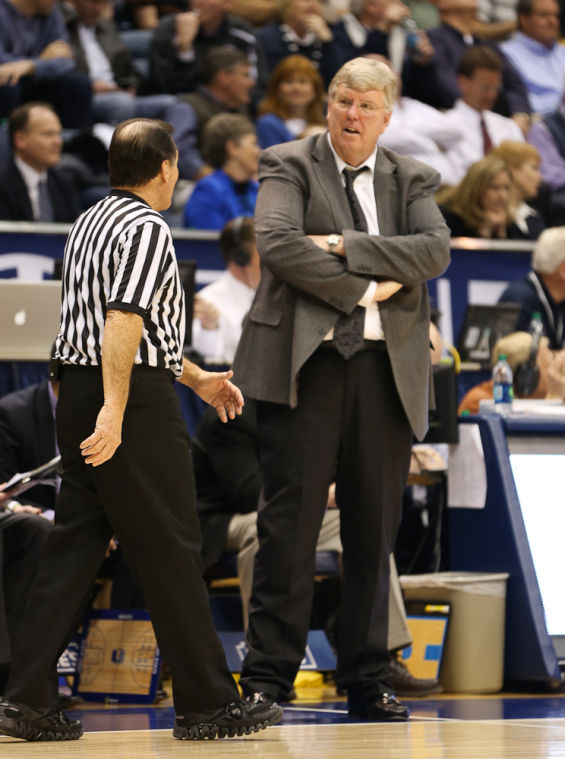 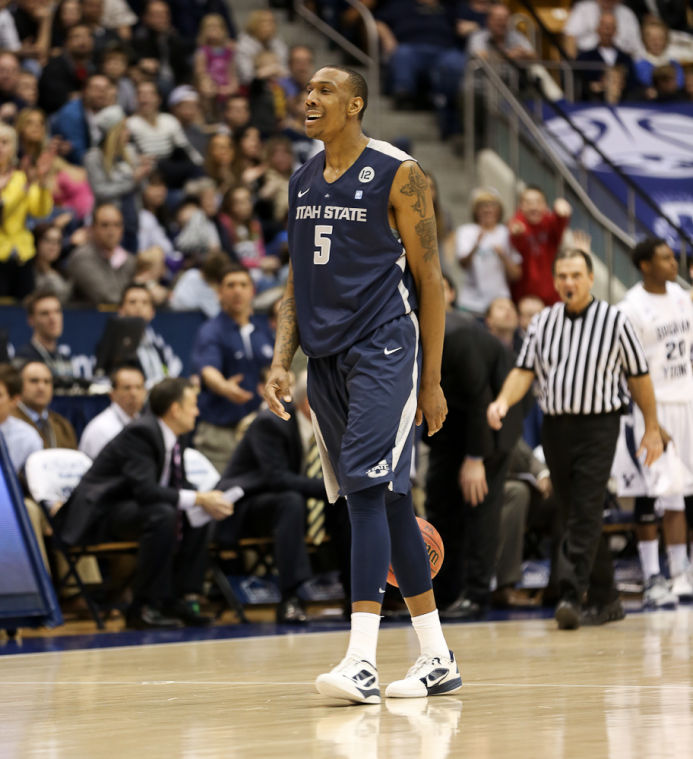 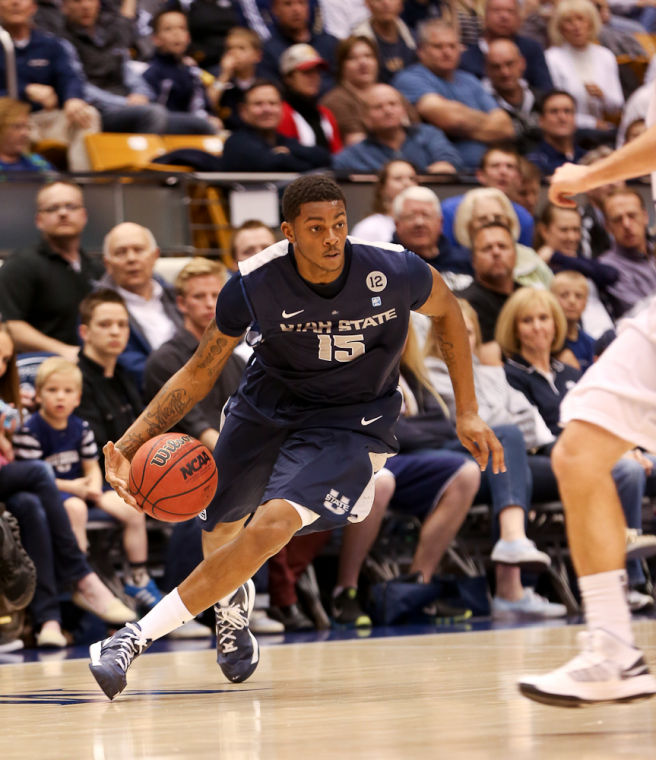 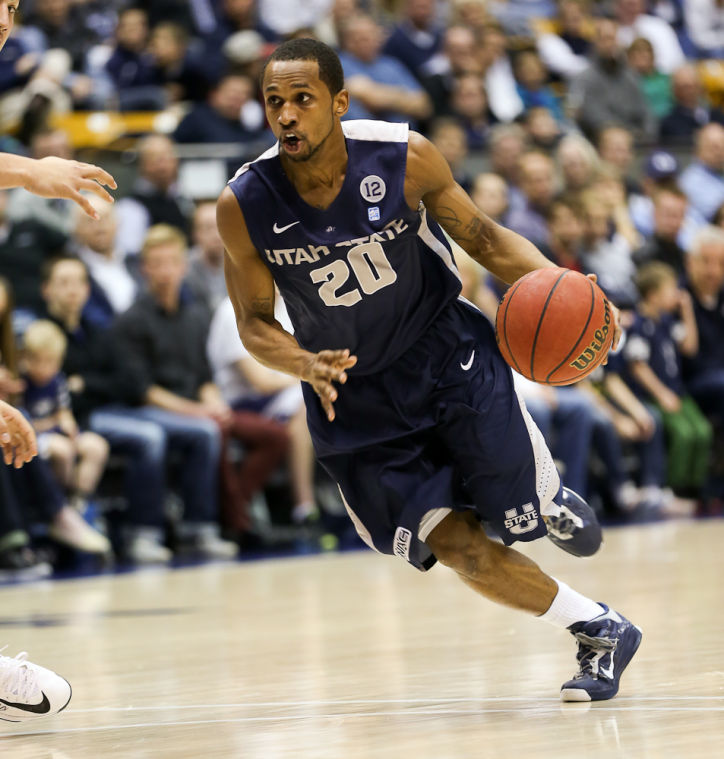 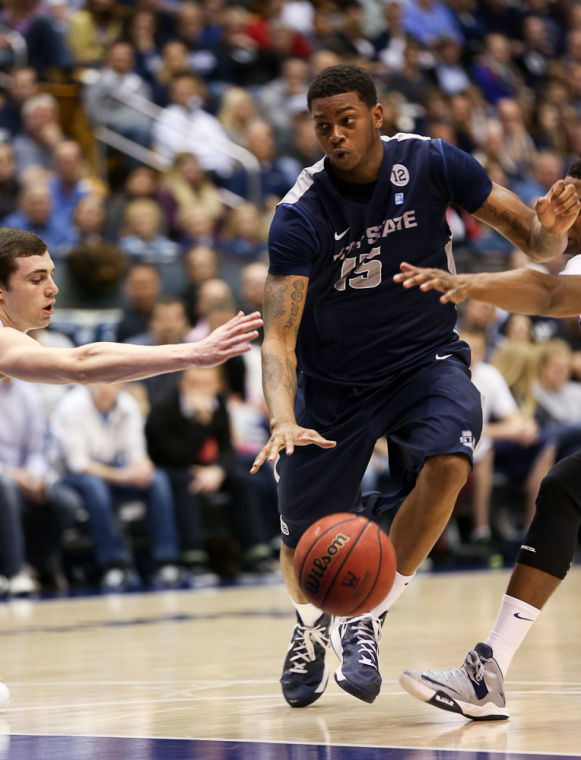 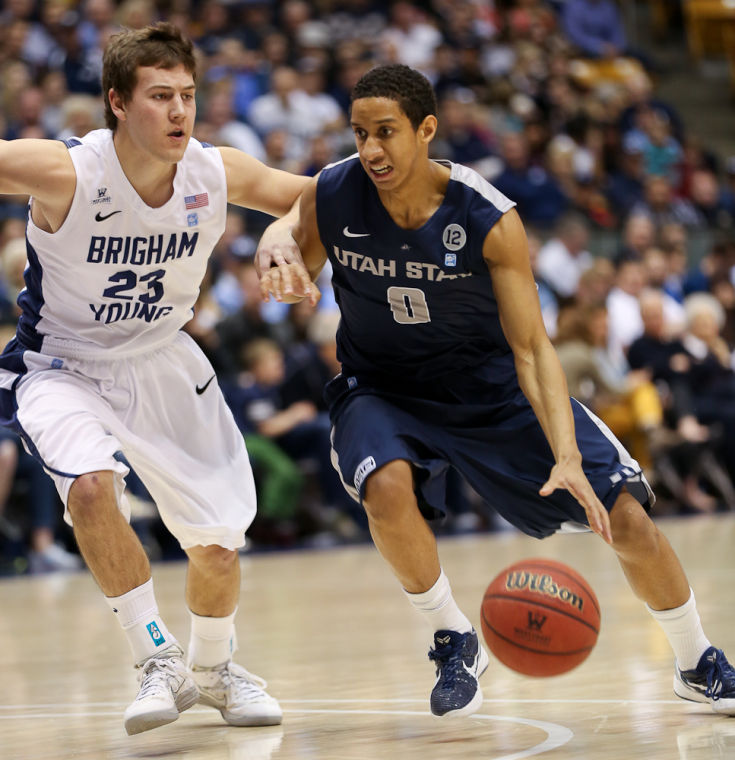 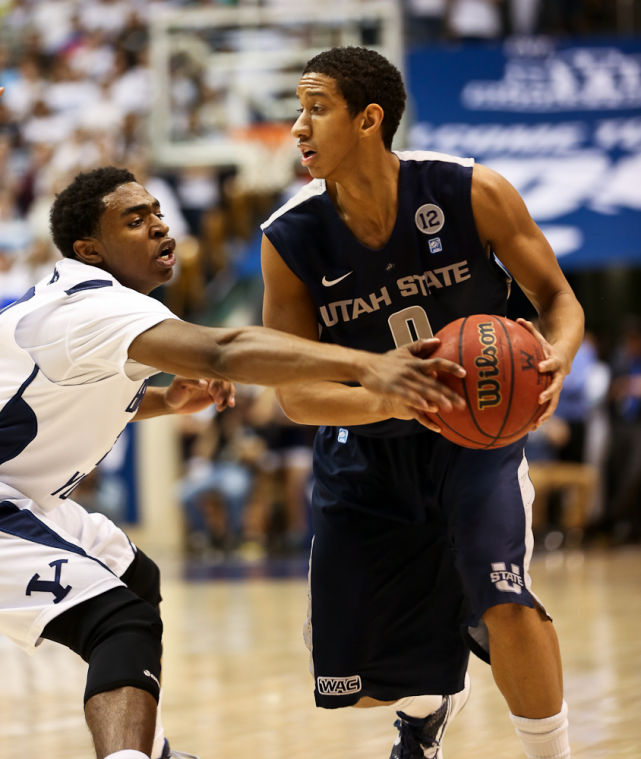 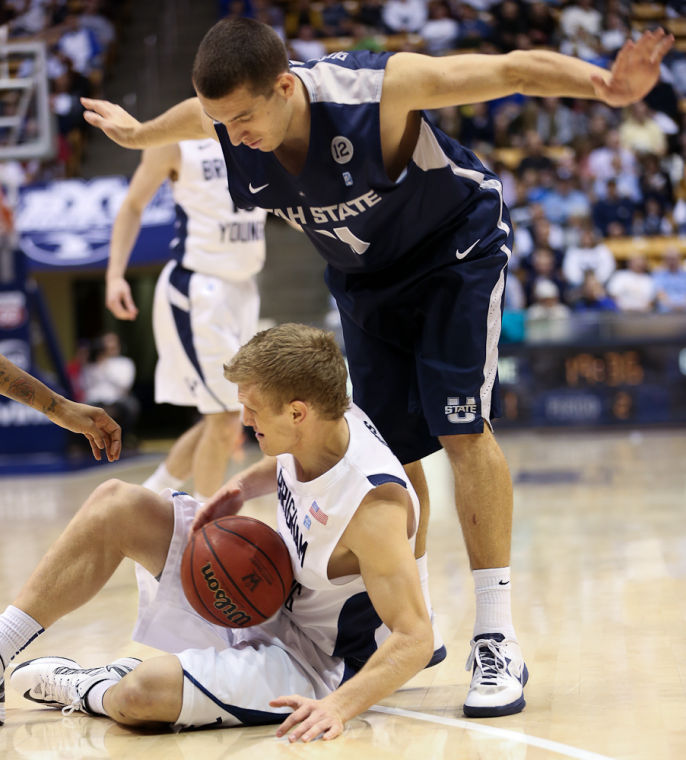 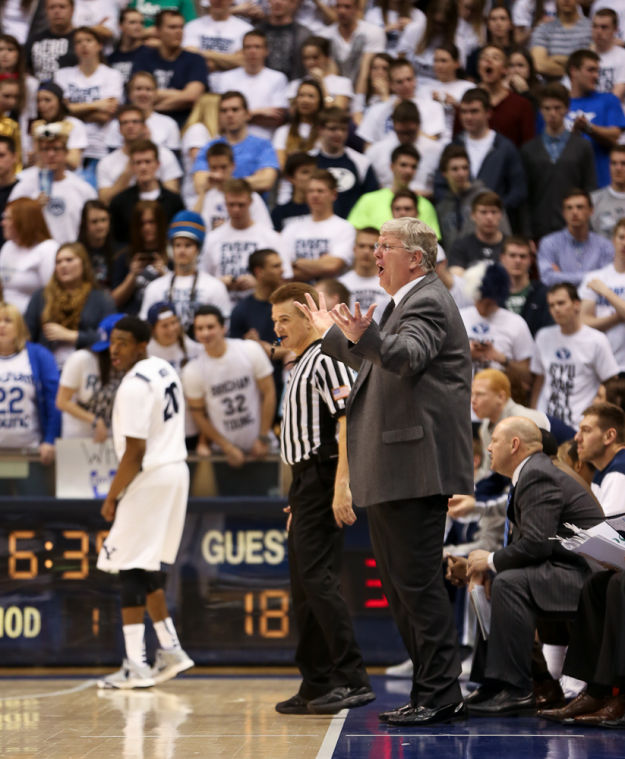 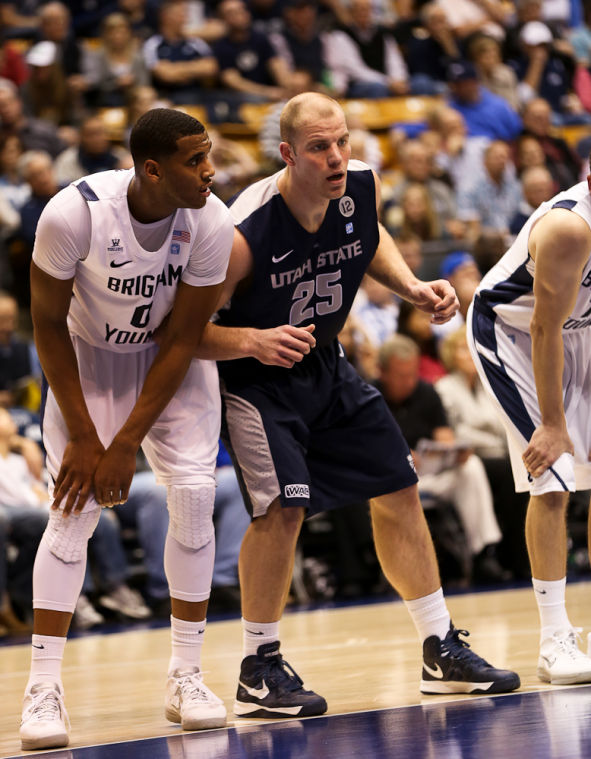 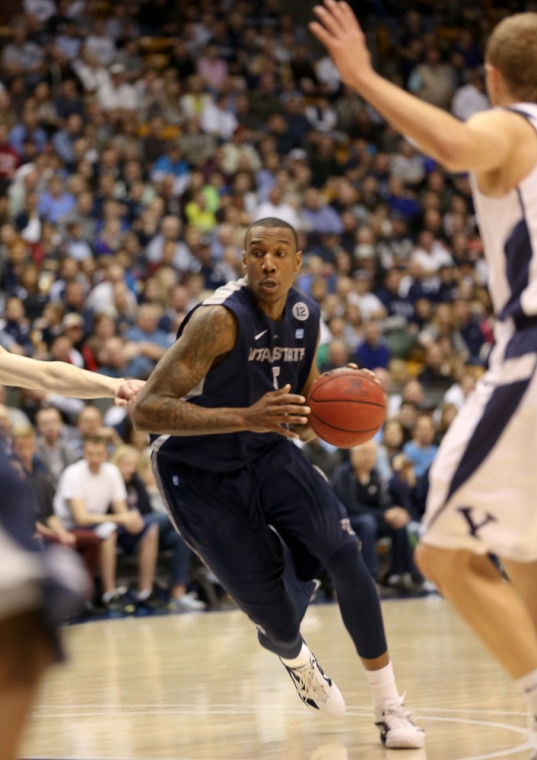 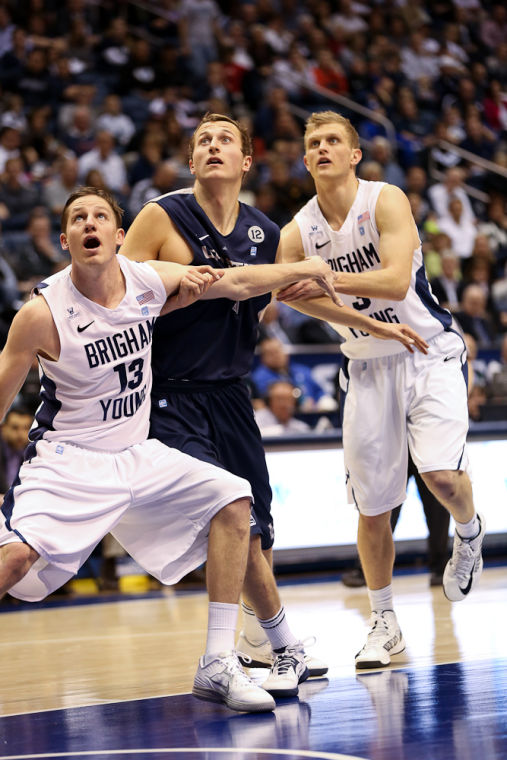 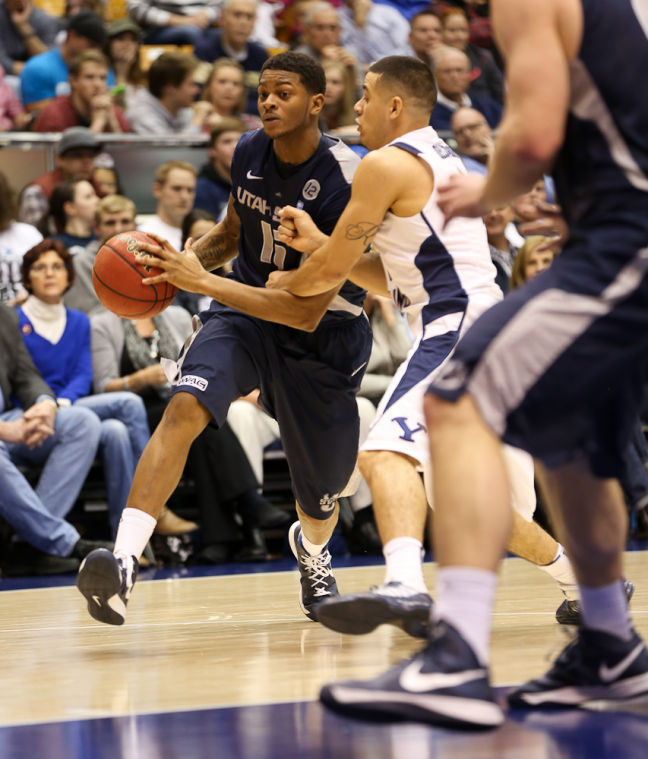 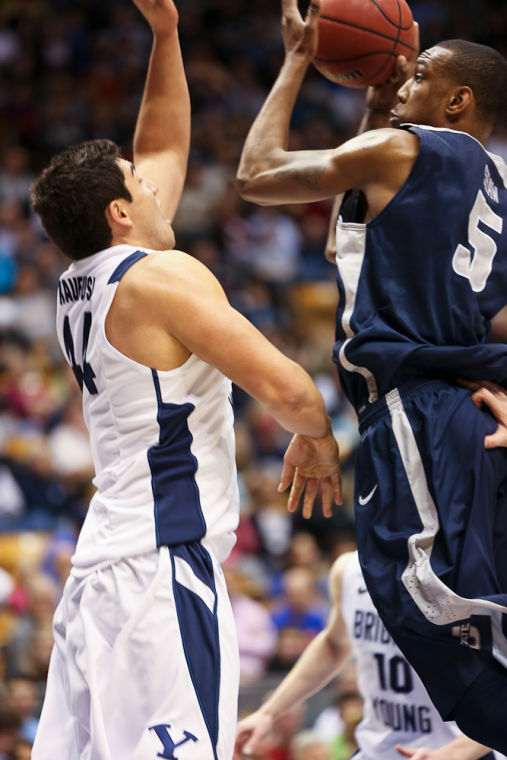 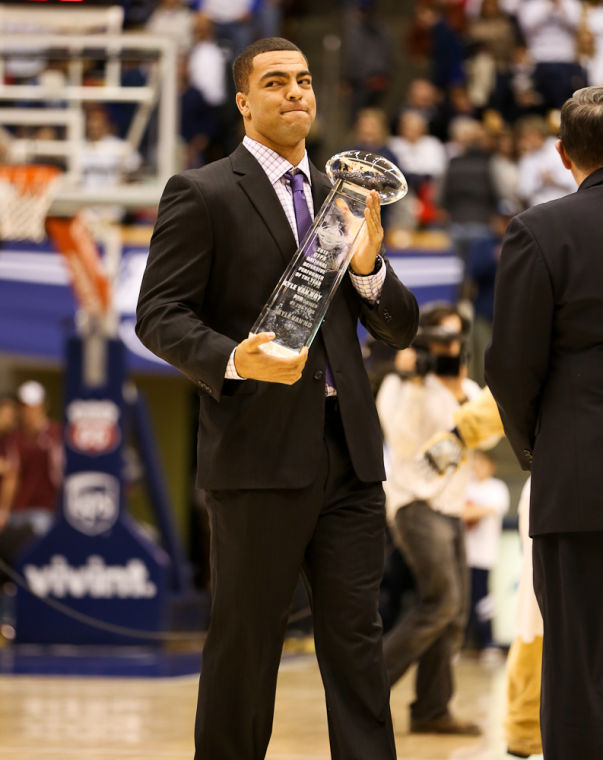 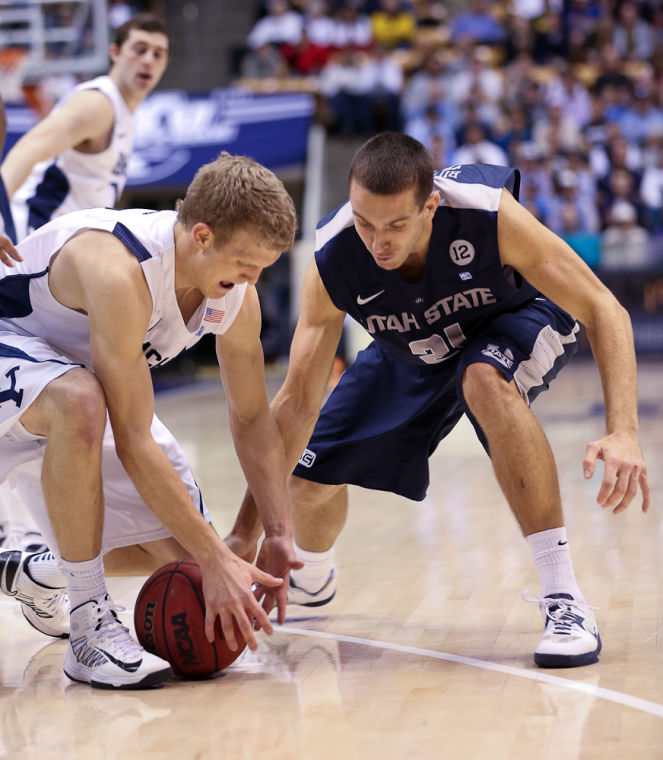 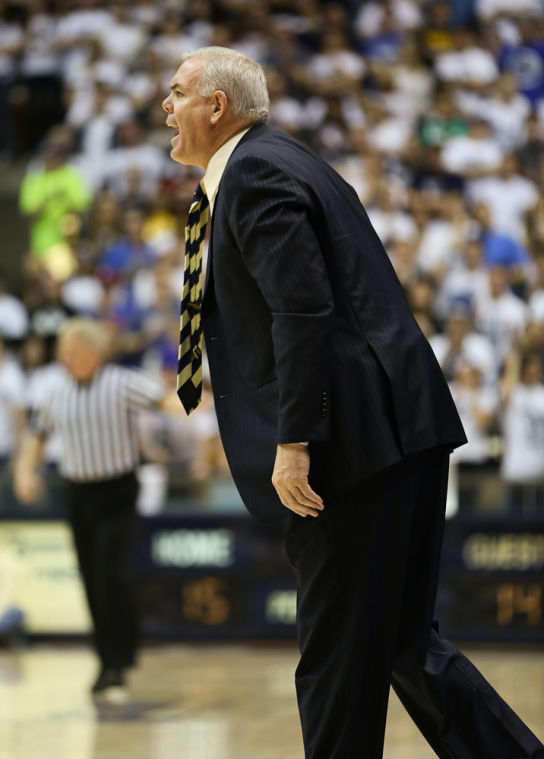 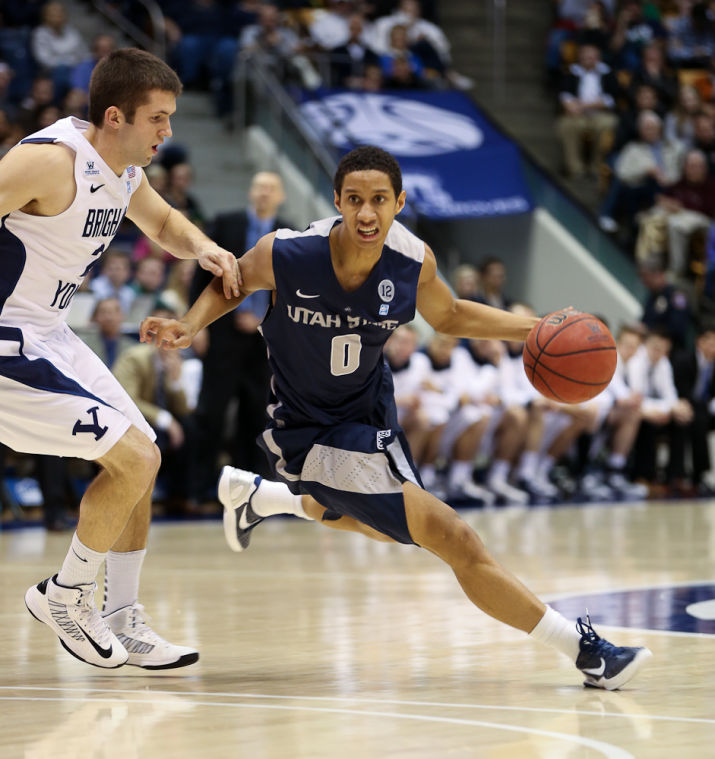 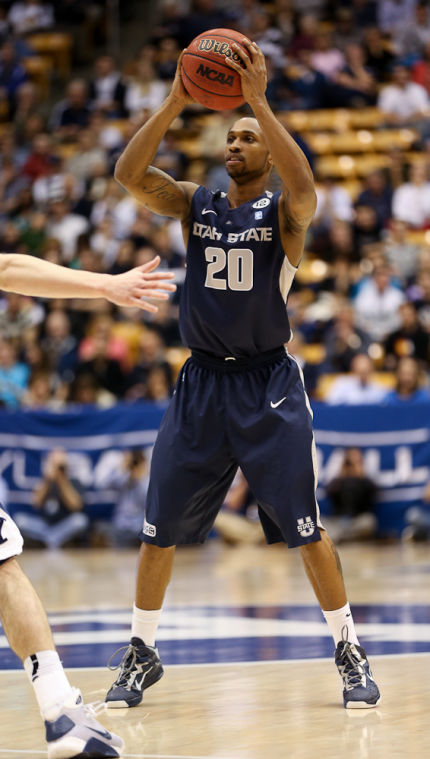 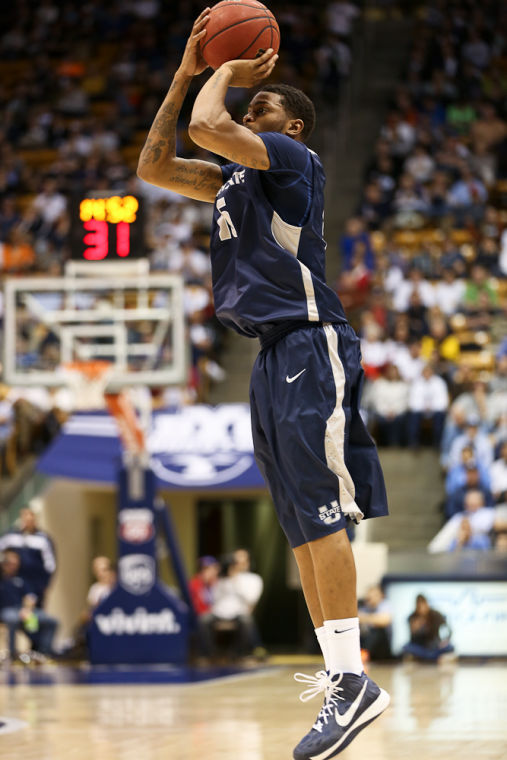 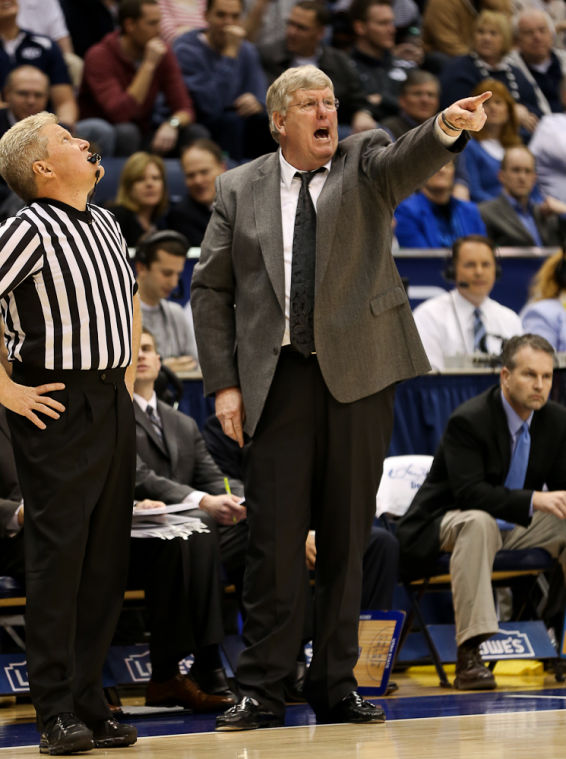 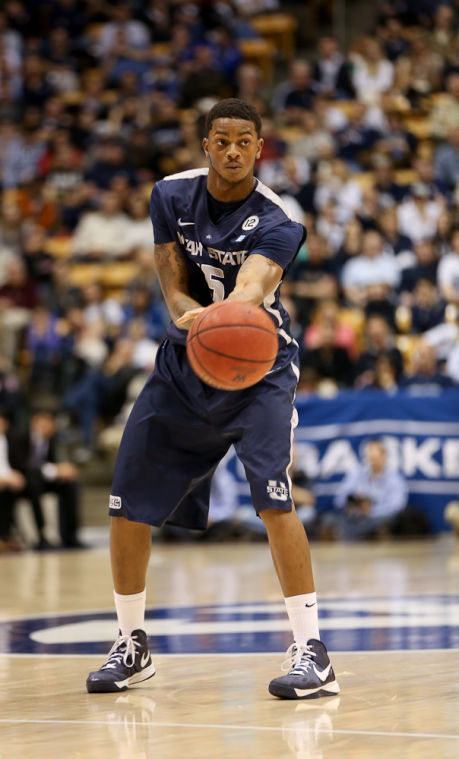 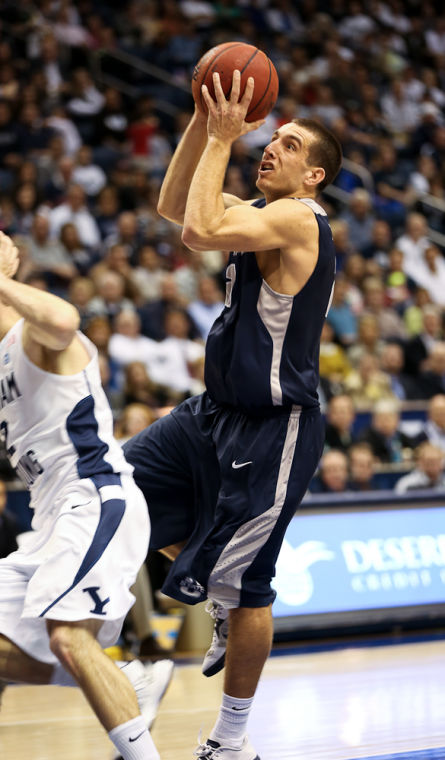 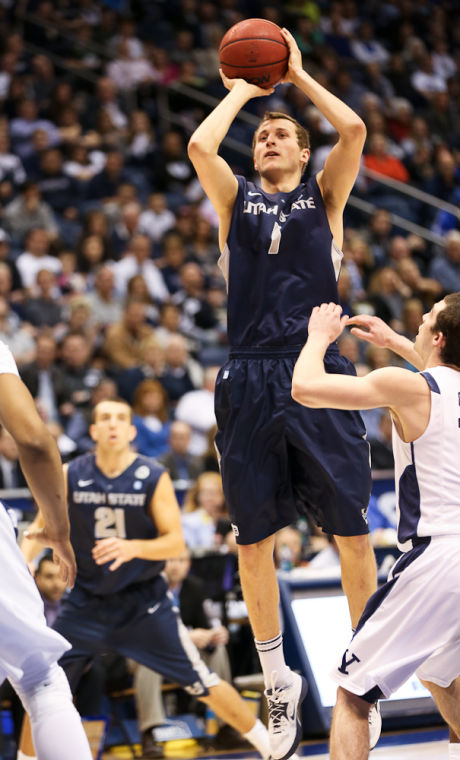 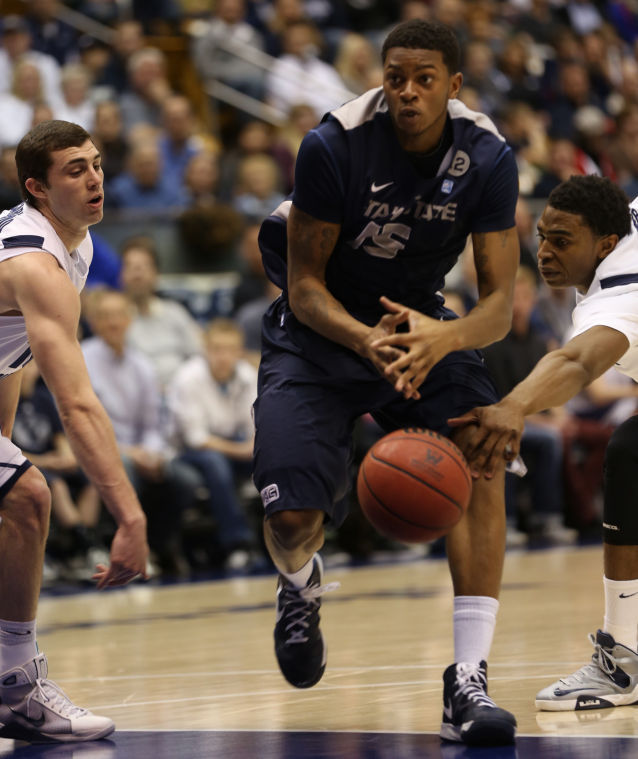 USU junior Marvin Jean gets the ball knocked out of his hands during the Aggies game against BYU in Provo on Feb. 19, 2013. The Aggies turned the ball over 18 times in the 70-68 loss to the Cougars. 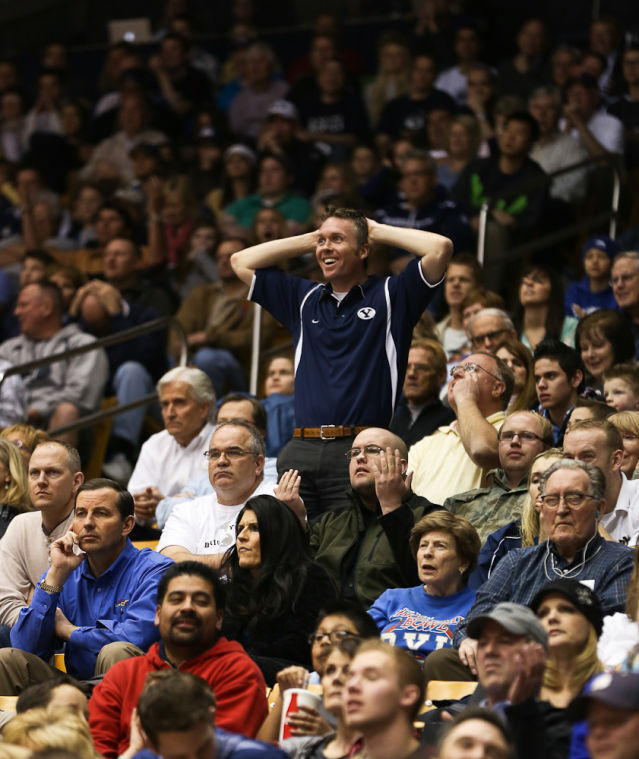