An artist's rendition of what the new Al's Sporting Goods will look like once it is constructed on the block currently known as Bridgerland Square at 1000 North Main in Logan.

LOGAN – A business that began with a handshake and a Mexican gold coin as collateral over 90 years ago has grown and expanded into the largest independent sporting goods store in Cache Valley. And now they have plans to get even bigger.

Al’s Sporting Goods has announced that they have purchased the 10 acre block on the corner of 1000 North Main in Logan, known as Bridgerland Square, and plan to build a 130,000 square foot shopping center, with the local sporting goods store as its centerpiece. The new store is scheduled to be done by June 2014.

The new store will occupy 60,000 square feet and include some new additions to what the sporting goods store has traditionally offered, including a state of the art gun range inside the store.

<span>”Our gun department will have a noticeable increase. We’ll probably triple the size of our hunting department,” says Kris Larsen, owner of Al’s Sporting Goods. “We’re planning on intently expanding our athletic department, having more of a quality soccer department and lacrosse department. Golf will take an expansion.</span>

<span>”Every department in our store will grow. The gun range is something that is very exciting and when it’s built it will be a state of the art, 10 lane gun range. There are a few of them in Utah right now but it will be the best in the valley for sure.”</span>

<span>Larsen says the gun range will open for people to come in independently to fire their weapons but also for those who want to try out pistols or rifles that they see in the store.</span>

<span>Besides adding its own gun range, the expanded store will also include a community class room and expanded bike shop with its own store front.</span>

The redevelopment project will also include space for additional retail and restaurants and it is already receiving a lot of interest from other businesses.

“It’s a great corner. We have a lot of very noteworthy, national tenants that we have letters of intent from, none of which that we want to mention right now, very exciting restaurants and fast food and others that I just can’t mention at this time,” Larsen explains.

In order for Al’s Sporting Goods to build the type of facility that they would like to, there will need to be some demolition of the existing buildings on that block.

<span>”Your’e going to see a lot of activity happening on that Bridgerland Square property probably within the next 60-90 days,” says Larsen. “We’ve already done all the pre-work, surveying and soil testing but you’ll see some activity right now.”</span>

<span>Larsen says the existing tenants have known for some time that the property was for sale and that some development would be happening there.</span>

<span>”They have known that development was pending so a lot of them have found other locations. Those that have been having a little difficulty we have been trying to help them find other locations,” Larsen continues. “There are other things going on on Main Street related to this that have created some store front opportunities for some of these guys.”</span>

<span>It is not certain how many, if any, of the existing tenants will be able to remain on the block, even after the redevelopment. Current tenants received notice that they needed to be out of their buildings by April 30 so demolition could begin. Construction of the new project is slated to start in June. </span>

<span>”There are a bunch of buildings on that property, most of which were built in the ‘60s and ‘70s. Just about every building on that entire 10 acre block will come down, in phases.”</span>

<span>So what will be done with the existing Al’s Sporting Goods building?</span>

<span>”</span>We have a national tenant which I can’t mention yet, but will be able to in a couple weeks (not a sporting goods tenant), that has given us a letter of intent and it has been approved,” Larsen says. “They are planning on moving in and they need to be in this building by June of 2014 so it’s go, go, go. It’s somebody that everyone will recognize and know. They have locations all over the United States and several in Utah.”

Al’s Sporting Goods began with Kris Larsen’s grandfather, Alvin, in 1921. At the time, Alvin used a small Mexican gold coin as collateral and was able to secure a loan through First National Bank. The money was used to purchase an old cash register and some bike parts.

<span>”My grandpa used to be the only locksmith, gunsmith and main bike repair man in Cache Valley. He probably repaired everybody’s bicycle in the ’30s and ’40s,” Larsen says. “I remember him telling me ‘it’s fun working with my hands but if you want to make money doing this don’t work with your hands, try to do it another way.'</span>

<span>Larsen says he and his father started taking the business more toward the retail side of the business and away from the repair side of it. That has paid off and allowed the business to outgrow several locations in Logan.</span>

<span>”We love it and we’re kind of like what a sporting goods store used to be, selling across all departments and try to do it as good and as professionally as we can.”</span> 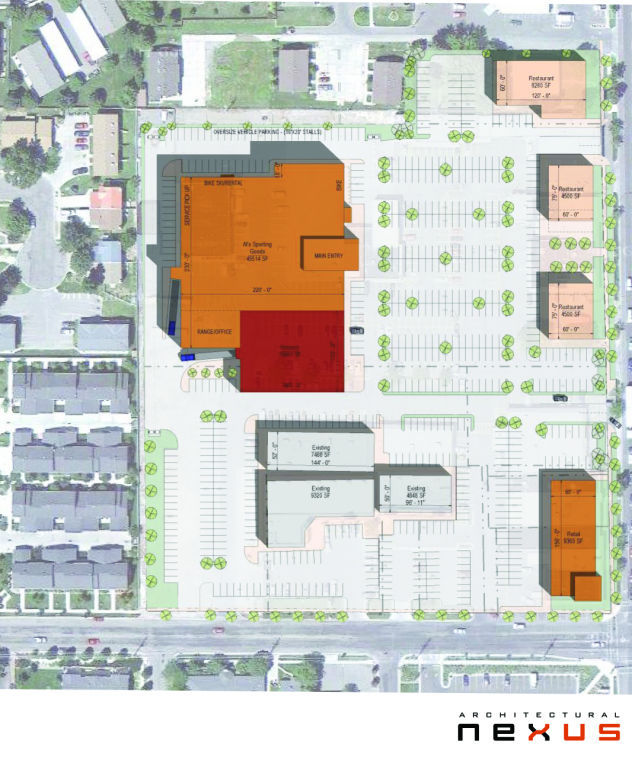 A conceptual drawing of what the 10 acre site will look like with the new Al's Sporting Goods coming to the block at 1000 North Main in Logan. Most existing buildings in the square will be knocked down.