<strong>OGDEN—</strong> Two nights removed from a dominating performance in the first round of the 4A state tournament, the Mountain Crest boys basketball team needed all 32 minutes Thursday in a 52-47 victory over Herriman.

“There’s going to be some point during this four game stretch where you’re not going to be playing your best. I don’t think this was our best game, but we still found a way to win,” MC head coach Graydon Buchmiller said. “No way am I trying to say that we were the best team out there, but we are included in the top four right now. Somewhere down the stretch you’re going to have to win a tough game, and hopefully that was the one we needed.”

Mountain Crest used solid defense in the third quarter, holding the maroon Mustangs to a mere four points, and built a 36-32 lead heading into the final quarter. After a scoreless three minutes in the final stanza, MC continued to add to its lead and built a nine-point advantage, 43-34, on a Tanner Knowles with 3:25 remaining.

However, in what turned out to be the theme throughout the day though, Herriman battled back. Francis Bernard answered Knowles triple with one of his own and then Z Arima knocked down a pair of free throws to make it 43-39 with two minutes to play.

After a pair of free throws by Eddy Hall, Arima pulled Herriman even closer as he was fouled by Gaje Ferguson and converted the shot as well. MC extended the lead back to five with two more Hall free throws with 1:25 to play, but Herriman wouldn’t go away. David Maynard rattled in a 3-pointer under pressure on the ensuing possession to pull the maroon Mustangs to within two, 47-45.

Hall, who finished with 10 points and five assists, attributed the Mustangs ability to perform under pressure to their postseason experience in other sports. A good portion of the MC team played in the 4A football state championship game.

“I think we’re more calm. We know the environment, and we just know what’s going to go on,” Hall said.

Despite that calm, there was a heated moment after Maynard’s 3-pointer when Arima fouled Crosbie. Crosbie’s foul led to an interesting situation, as there was a brief scuffle between Crosbie and Arima after the call. A double technical was assessed, and the ball was awarded to MC after Crosbie’s free throws via the possession arrow. That led to two more free throws for Hall, and a 50-45 Mountain Crest lead.

Bernard hit a jumper with 17.2 seconds left for Herriman to again pull within three, but the maroon Mustangs wouldn’t get any closer. Crosbie added the final points of the game on a pair of free throws with 13.7 seconds left, for the final margin of victory.

“Herriman is a good team, and we knew they were a good team and we just had to come out and fight the whole way through and that’s what we did,” Hall said.

As much as the second half was a grind-it-out slugfest, the first half was all about scoring and efficient offense. Both teams shot better than 55 percent in the first 16 minutes, and each team had very few turnovers. Only six free throws combined were attempted in the first and second quarters, and each team knocked down a trio of 3’s.

“I just don’t think we were doing what we’ve coached them all year to do. A lot of the halftime was going back to practice one, what do we teach, how do we play, different scenarios and what we’re supposed to be doing, and also intensity,” Buchmiller said. “It looked like we may have been playing hard, but it wasn’t smart how we were playing.”

After the first quarter ended in a 15-15 tie, the teams continued to battle back and forth in the second. It appeared like Mountain Crest was going to sneak into the half with a one point lead, but Herriman’s Tueni Lupeamanu banked in a deep 3-pointer with just seconds left to send them to the break with a 28-26 advantage.

MC opened the second half with an 8-0 run, which built the lead which the mustangs wouldn’t relinquish. For the game, Crosbie led the Mustangs with 15 points, while Faimafili “Mo” Lualu-Pututau added 14 points. Arima led Herriman with 16 points, while Maynard had 14.

With the win, Mountain Crest advances to the 4A state semifinals where they will take on valley-rival Logan in the first of the two games, Friday at 5:50 p.m. The Grizzlies continued their surprising postseason run with a 66-62 upset of East.

“It represents our region well, and you’re proud of the fact that those boys can have the opportunity to compete and play well, and you wish them the best until you have to face them again,” Buchmiller said. 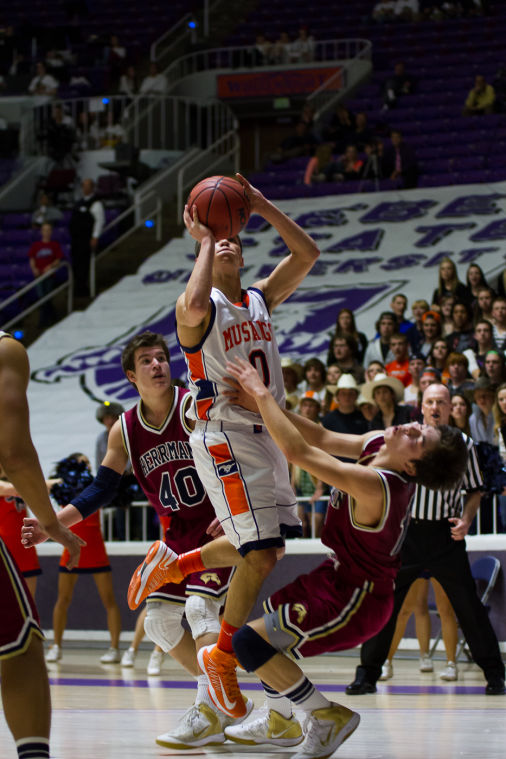 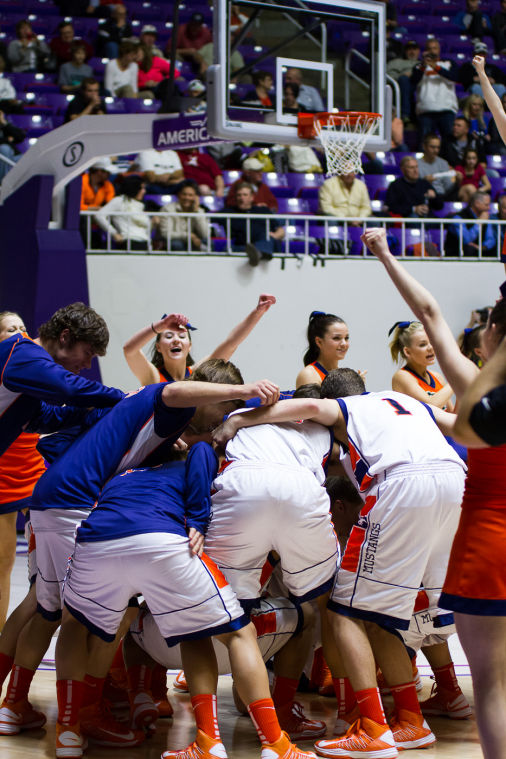 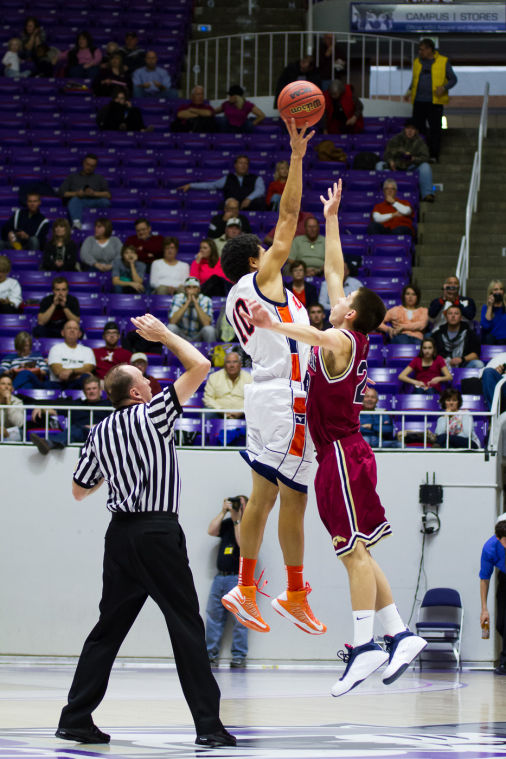 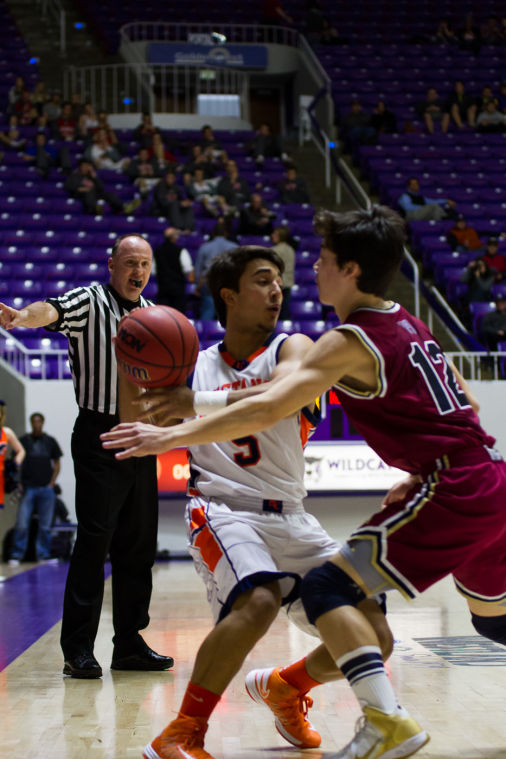 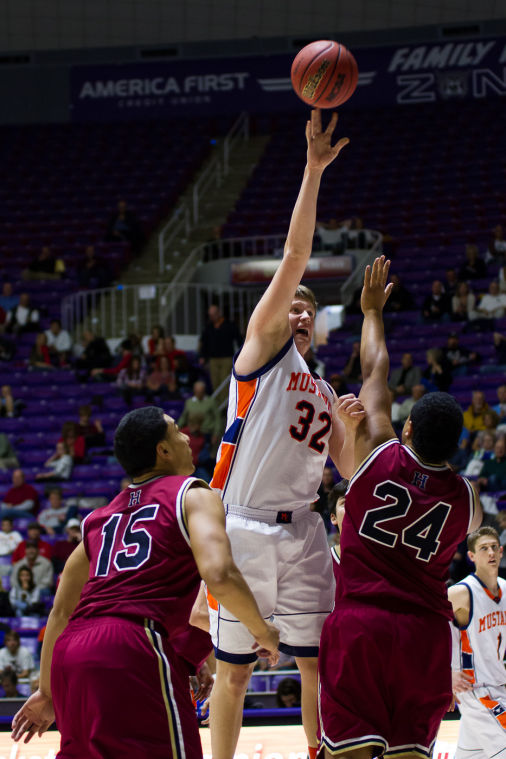 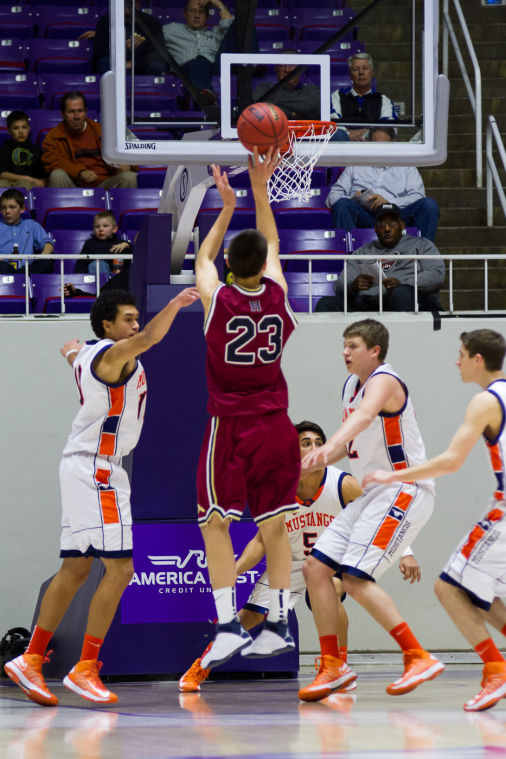 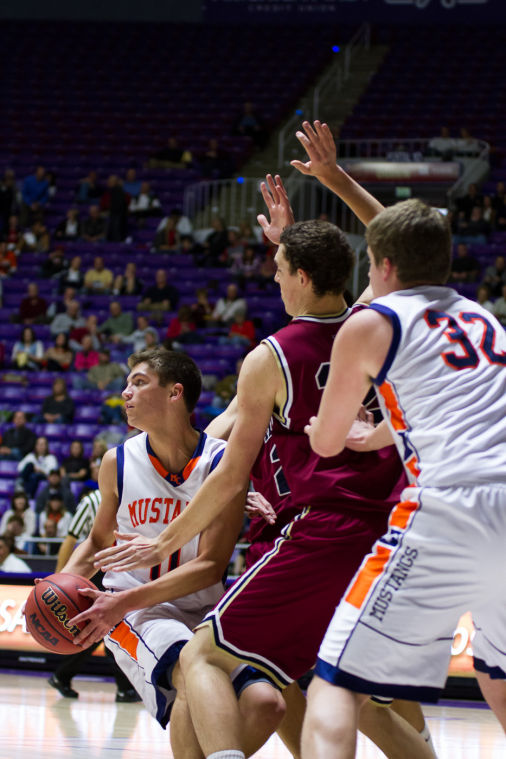 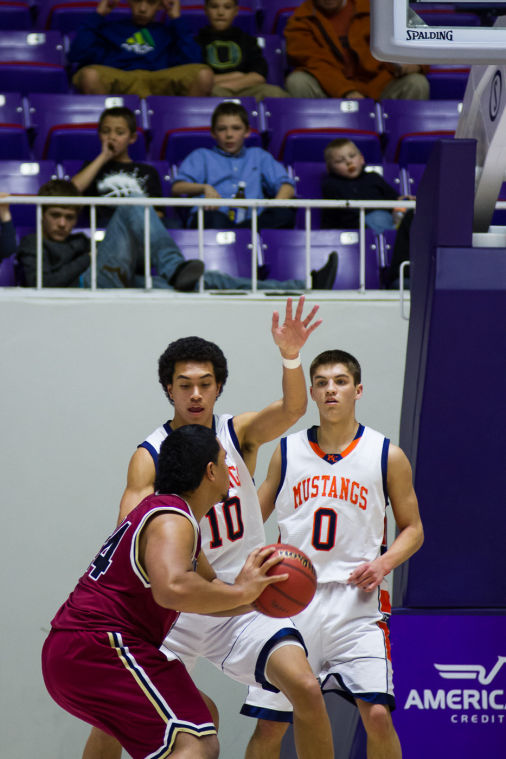 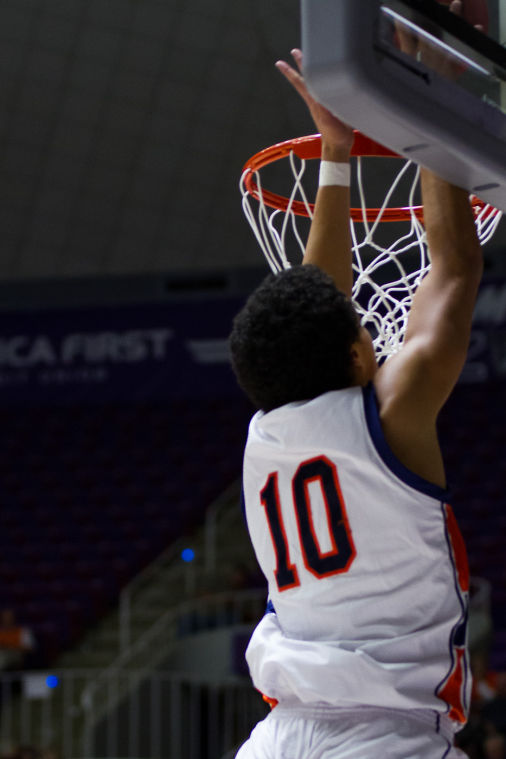 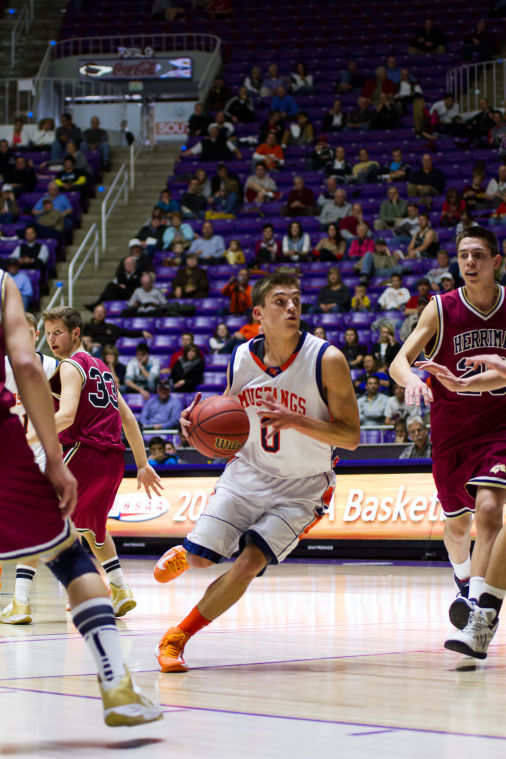 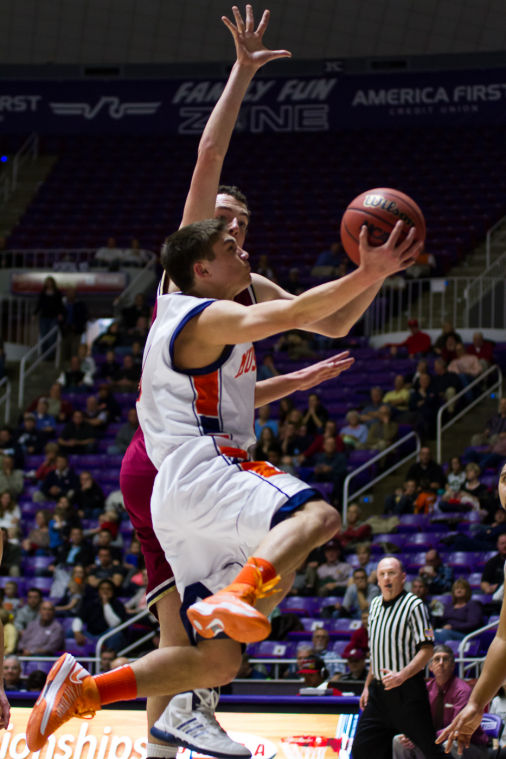 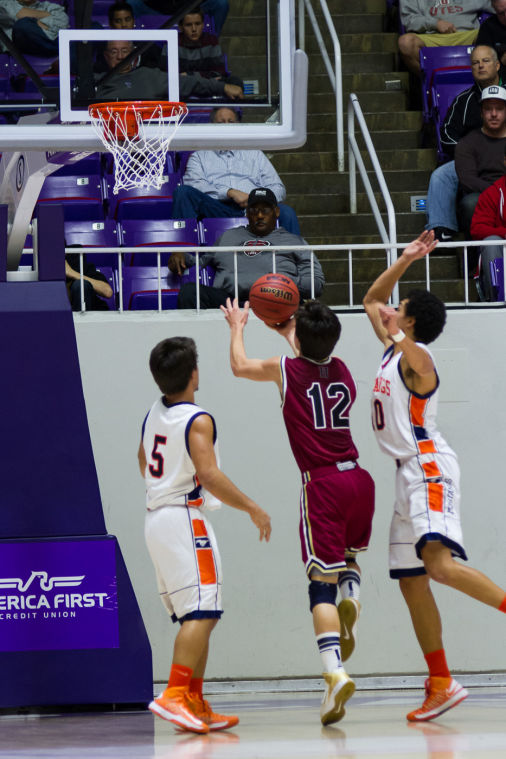 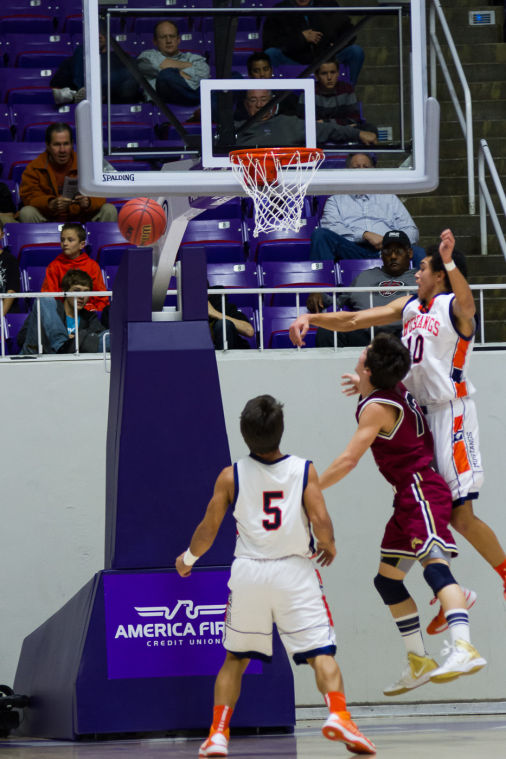 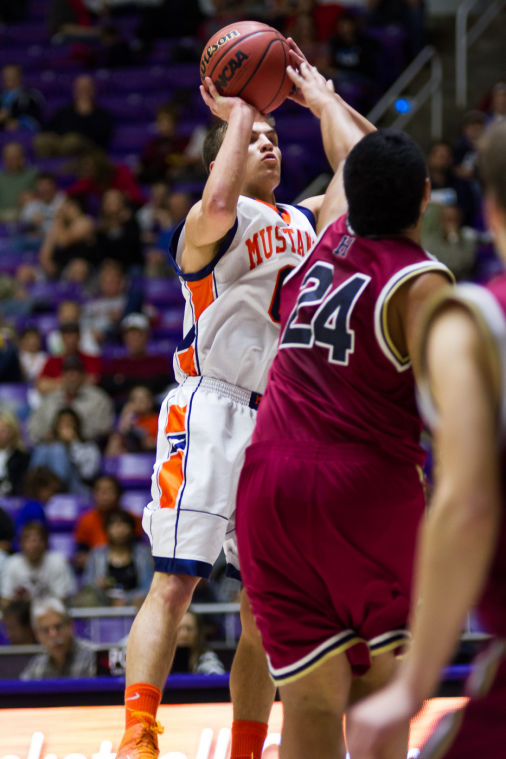 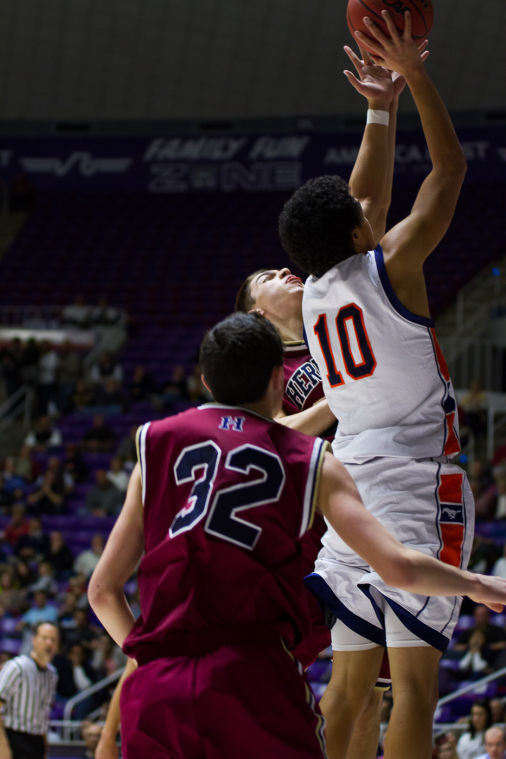 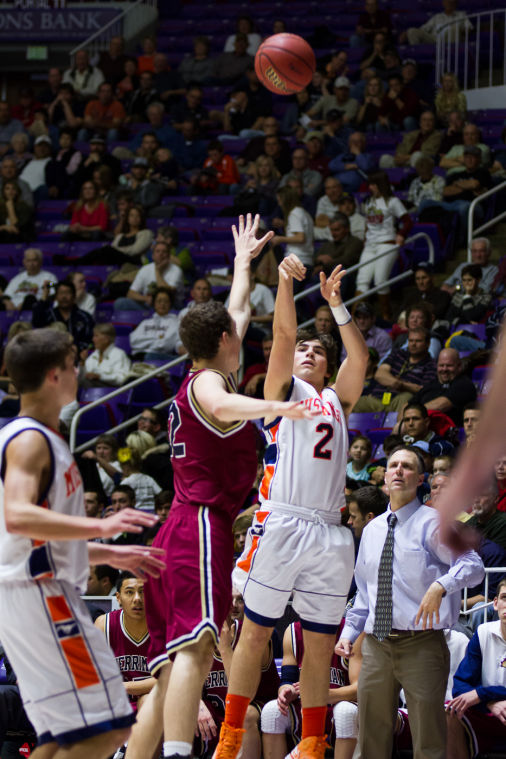 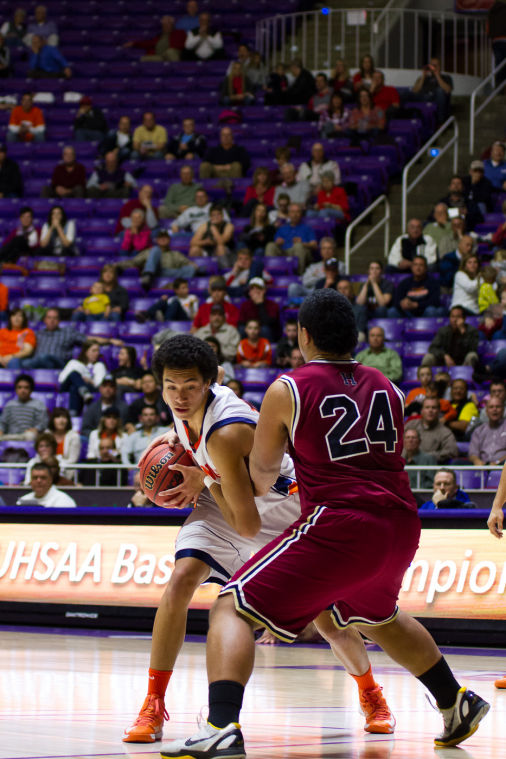 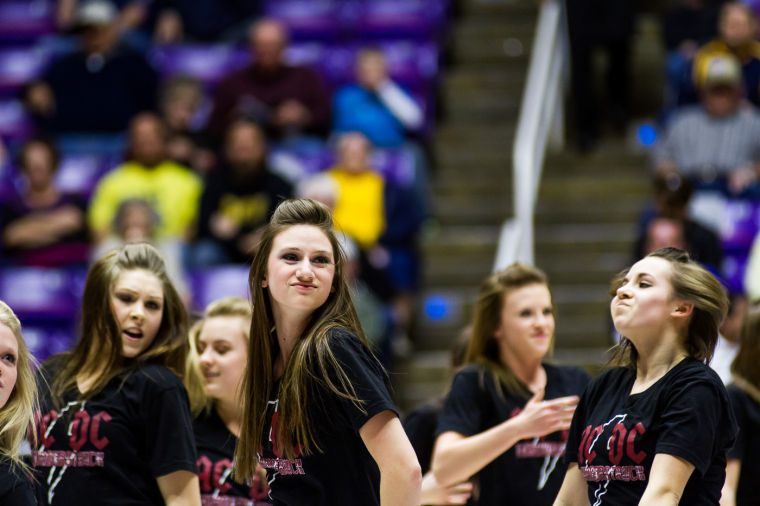 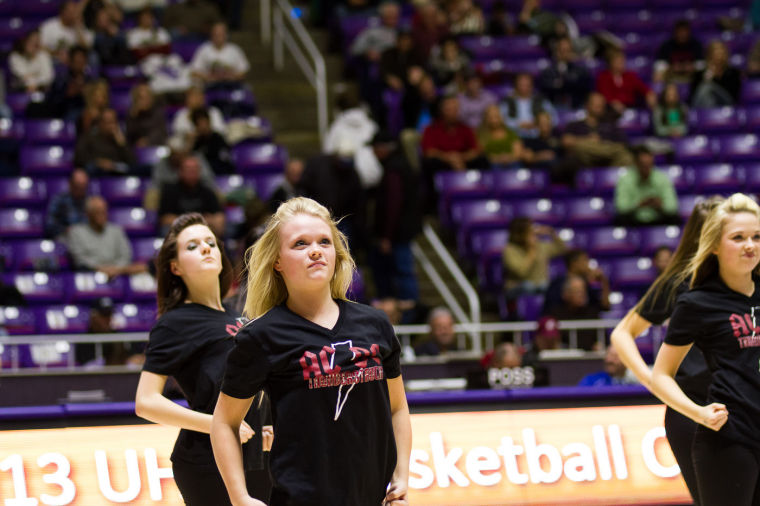 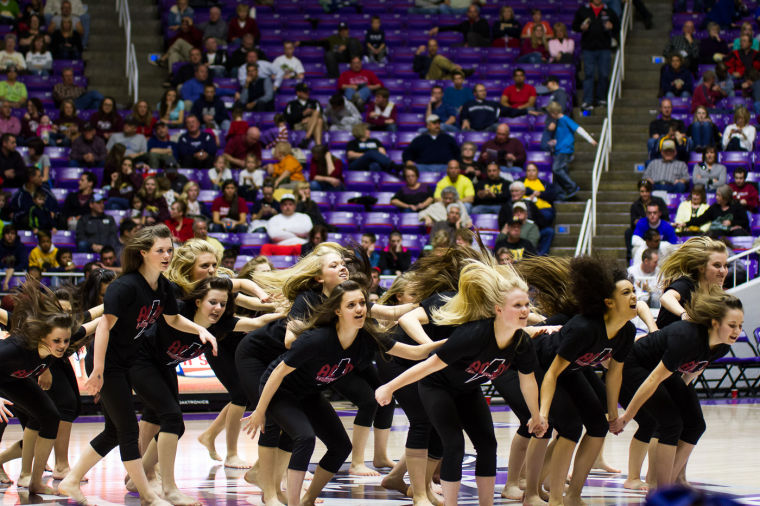 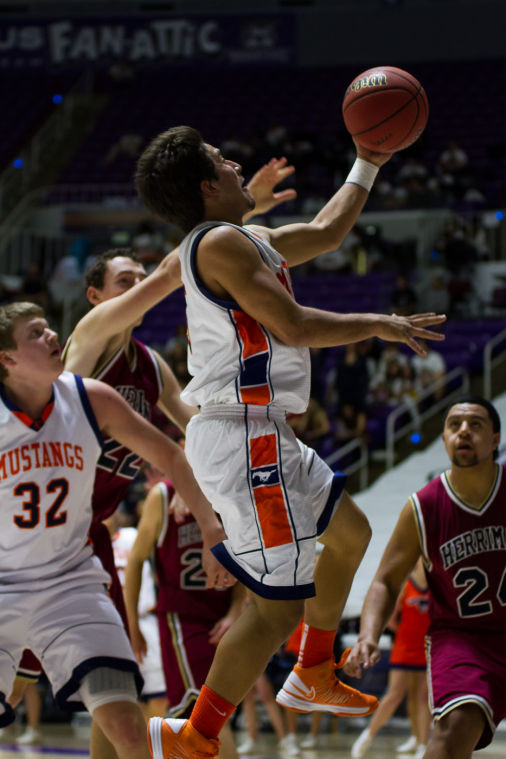 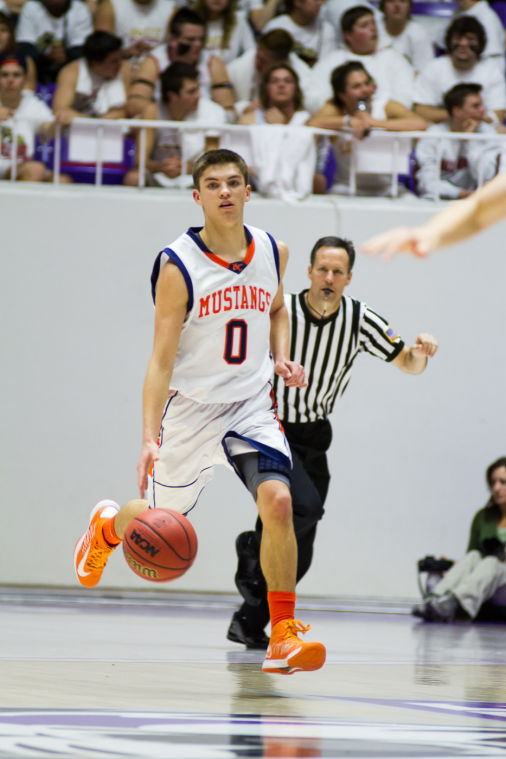 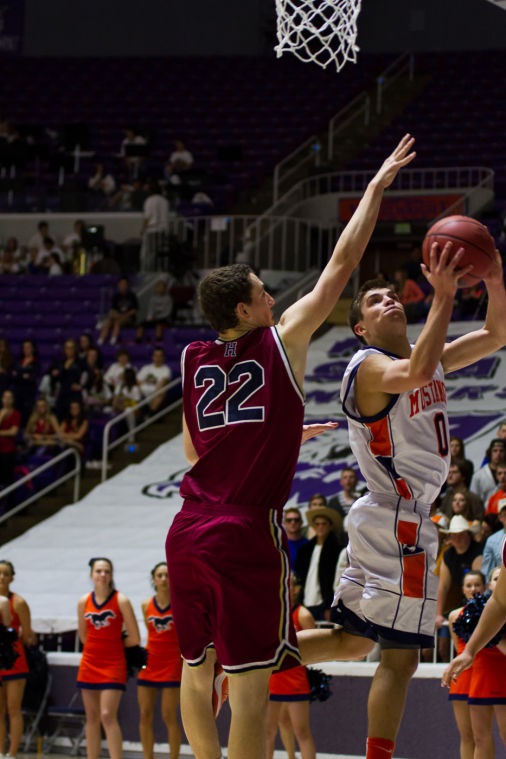 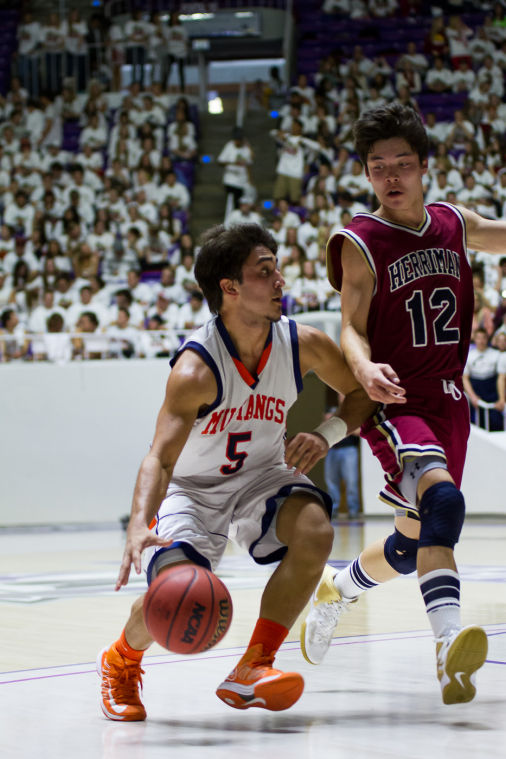 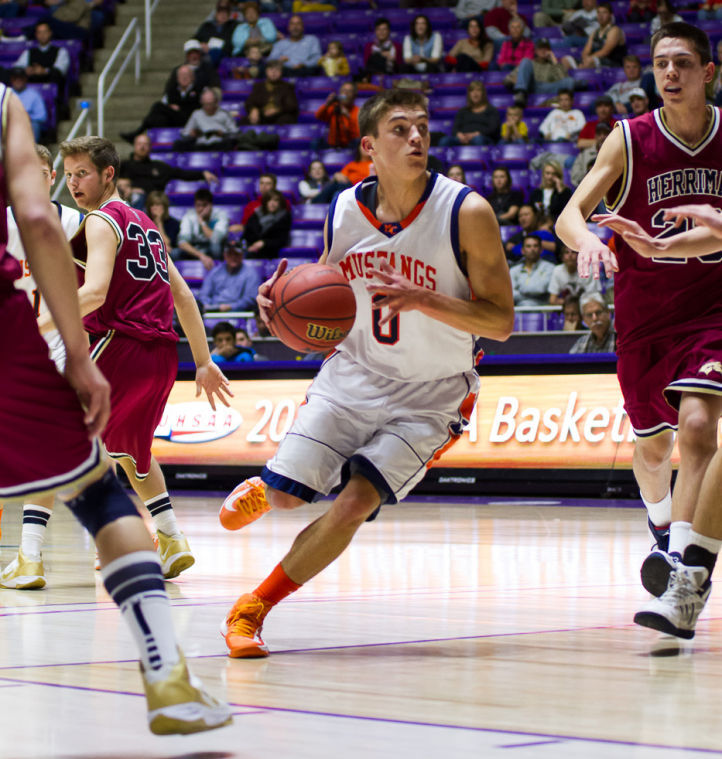