<strong>OGDEN—</strong> Riding its seniors, the Sky View boys basketball team got off to a hot start, made free throws down the stretch, and held on to beat Olympus, 60-57, in one of the most entertaining games of the 2013 state playoffs.

“We just want to keep going and we want to win it. It’s important to us, because the last few years we’ve won one game or we’ve been one and done,” senior Ty Nielsen said. “Now we’ve gotten to the next step and we’ve got the second game – we’re going for it all.”

Olympus never led in the second half, but tied the game with two minutes remaining. The Titans missed a shot trailing, 52-50, but the rebound bounced around and eventually kicked off a referee’s leg and into the waiting arms of a Titan player under the basket, where a layup tied the game at 52.

However, on the ensuing possession, Sky View had the answer. With seniors Nielsen and Jalen Moore leading the Bobcats, senior Matt Dewey had a solid game of his own, including a basket to give SV the lead for good. With the Titan defense focused on Nielsen and Moore, Dewey took his man off the dribble at the top of the key and went all the way to the basket for a layup. He finished with 11 points.

“That was huge, he’s a stud, love that kid,” Nielsen said of Dewey. “I love this whole team. Without them, we couldn’t be where we’re at. We just keep playing together as a team, and just keep getting better and better.”

Following Dewey’s basket, Sky View trapped Olympus along the baseline and forced a turnover. Seconds later, Moore found himself at the line shooting one-and-one. He made both, and the Bobcats continued to hit free throws down the stretch as they held of the Titans to advance to the state semifinals.

As a team, Sky View dominated at the line as the Bobcats attempted 21 free throws to the Titans’ three – knocking down 16 of them. During the final 1:03 of the game, the Bobcats were 9-of-10 from the charity stripe.

Similar to Tuesday’s shellacking of Timpview in the first round, the Bobcats used defense to get going early. Sky View’s full court pressure forced consecutive turnovers on the Titans first possessions, and the Nielsen took advantage scoring the first 10 SV points.

Nielsen was a force all day both driving to the basket and knocking down shots from the perimeter as he finished with a game-high 26 points on 7-of-12 shooting.

“Ty has a ton of energy. As you can tell, he plays as hard as anybody that I’ve seen play in a long time,” SV head coach Kirk Hillyard said. “Ty leaves it all out there on the floor. He got some things going to the basket early … he got us going a little bit, got us moving around. Ty is a fun kid to watch.”

Despite the Bobcats’ early momentum, Olympus battled back behind the hot shooting of guard Coulson Hardy. Hardy knocked down three shots from beyond the arc in the first half and finished with 19 points as he connected on 8-of-9 shots overall.

Sky View led 14-12 after the first eight minutes of action, but the Titans tied the game up immediately to start the second quarter, and maintained that lead for much of the second stanza as Moore struggled early.

The future Aggie got things going right before the half though, knocking down a pair of jumpers – including one at the buzzer – to knot things up at 28 heading into the intermission.

“They were important, I couldn’t get anything to fall,” said Moore of the jumpers before the half. “They were playing tough D, so give them props on that, but once I got those two shots to go I was kind of feeling it and I just brought it over to the second half and tried to capitalize on the buckets that I could get.”

Coming out of the half, Sky View got things going early again as they scored the first eight points of the third quarter and jumped out to a 36-28 lead. That would be the biggest lead the Bobcats would have though, as once again the Titans battled back.

Led by big man Alec Monson, who tallied 20 points on 8-of-11 shooting, Olympus closed to within a score multiple times. The Titans ended the third quarter on a 4-0 run, and Sky View clung to a 42-41 lead heading into the final eight minutes of action.

That’s when Moore took over. After finishing with 28 points against Timpview, the senior had only tallied six points through the first three quarters of action. In the fourth quarter though, Moore tallied 10 points as he was able to get to the basket, get to the foul line, and occasionally both.

“We played great defense throughout the whole game, and I think our 2-3 zone was kind of getting them to struggle and turn the ball over,” Moore said. “We were playing great, and I was just trying to get to the free throw line to get my shot going. That’s the easiest way to get it going, and I think that’s what I did. It was a great win.”

With the win, Sky View advances to play Bountiful on Friday at 7:30 p.m. The Braves handed Region 5 its first loss of the tournament Thursday, as they defeated Roy, 60-54. The game will feature a matchup of two future Utah State players in Moore and Bountiful junior guard Sam Merrill.

“It’s been a long time since we’ve had that many fans down here. It’s great to see those guys down here and supporting these kids,” Hillyard said. “This is what high school sports is about – going out and having fun, bringing your students along, it’s an experience that they won’t forget.” 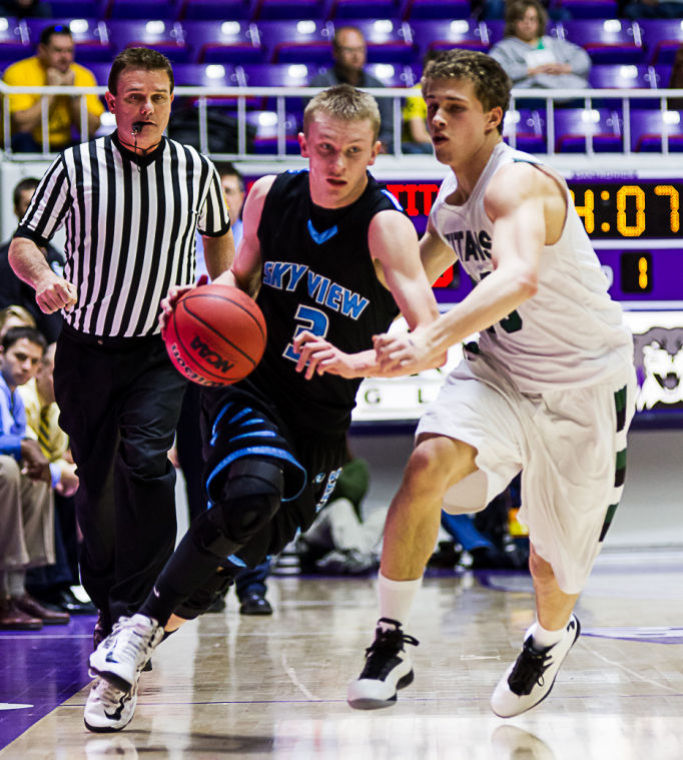