Utah State forward Ben Clifford (1) and Texas-Arlington forward Brandon Edwards (35) fight for control of the ball during the first half of an NCAA basketball game, Saturday, March 2, 2013, in Arlington, Texas. (AP Photo/LM Otero)

After a big loss to Louisiana Tech, the Aggies tried to get the revenge win over UT Arlington. The road trip didn’t get any better for Utah State, however, as they fell to the Mavericks 61-46. The loss drops the Aggies to 9-7 in WAC play. USU currently sits in fifth place in the WAC and would play the Mavericks again in the first round of the WAC tournament in Las Vegas if it were to start today.

“We need to do better next week before we start worrying about playing them in the tournament,” USU head coach Stew Morrill said during the post game broadcast on KVNU. “We will play them and they will have a chance to beat us three times, but you know what, if we play like we did tonight, they will beat us three times.

“We’ve got to man up a bit, be tougher and be able to make some baskets when they are pressuring you. They just pressure us and we cave in. That’s what happened two times with these guys.”

Marcel Davis led the way for USU with 15 points. TeNale Roland and Jarred Shaw also scored in double figures with 12 and 11 respectively. UTA’s Kevin Butler led all scorers with 21.

The injury-plagued Aggies are down to only seven players that started the year with the team and the USU bench doesn’t have a sub shorter than 6 foot 10 inches. Davis and Roland played the entire 40 minutes of the game.

“I’m sad for them because I know that they want to be out there and play too,” Davis said of his injured teammates. “It’s like we have eight coaches on the bench.”

Offensively, the Aggies couldn’t get much going. USU had 16 turnovers and shot only 30 percent from the floor. UT Arlington took advantage of the lack of depth USU had at the guard position by scoring 15 points off the Aggie turnovers.

“We were inept offensively, I mean we were totally inept,” Morrill said. “I mean you’ve got to be a basketball player at the division one level and make a basket. We played hard defensively and on the boards to have a chance to win, but we were totally inept offensively. You can’t have guys make 3-for-11. They are division one scholarship basketball players, step up and play better offense than that. You can obviously tell I am not happy. That to me was just inept. I don’t know how else to put it.”

After falling behind early, USU made a run at the Mavericks and tied the game at 20 with a little more than six minutes left in the first half. The offense stalled at that point as the Aggies didn’t make a field goal the rest of the half. UT Arlington led at the break 28-22.

The Mavericks jumped out on the Aggies after halftime, beginning the half on a 13-3 run over the first five minutes of the half. Utah State gained a little composure after the run but allowed the Mavericks to extend their lead to 17 with 12:32 left in the game. The Aggies never came closer than 12 points of the Mavericks the rest of the game.

“Now I know we don’t have all of our people, I’m very well aware of that, but the people we’ve got have been recruited to Utah State to play division one basketball. They’ve got to believe they can play.”

Utah State returns home next week for their final two games of the regular season. The Aggies host Texas State on Thursday, March 7 at 7 p.m.

“We’ve got a chance to get to 20 wins on the season,” Morrill said. “There is a lot to play for. We can’t have guys thinking they’re tired and worn out and all that. Again, you’ve got to be a little tougher than that, that’s firmly what I believe. We’ve kind of run out of gas and that’s unacceptable to me. And I won’t accept that as a coach. And they shouldn’t accept that as players.”

USU will finish the regular season by hosting Texas State on Thursday and UT San Antonio on Saturday. 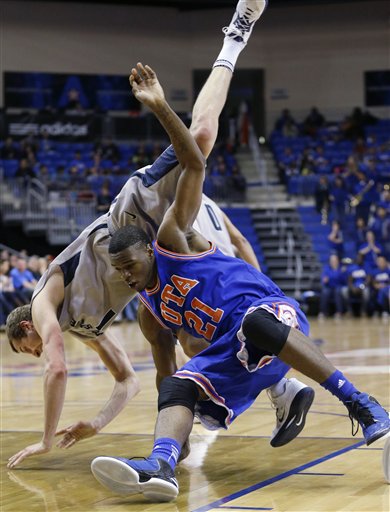 Utah State forward Ben Clifford (1) lands on Texas-Arlington forward Greg Gainey (21) after they jumped for a rebound during the first half of an NCAA college basketball game, Saturday, March 2, 2013, in Arlington, Texas. (AP Photo/LM Otero) 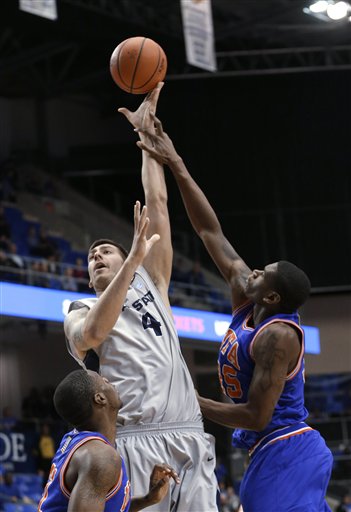 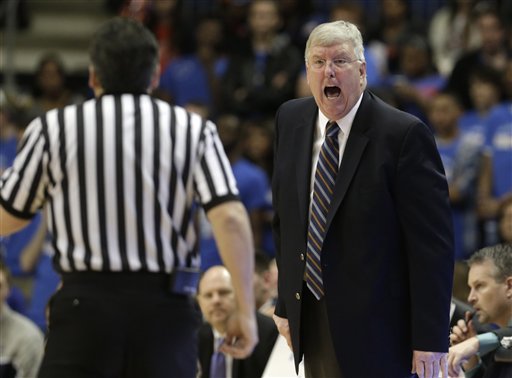