<strong>LOGAN—</strong> The Utah State University hockey team is headed to the Division II national championships this weekend in St. Louis with one goal on its mind – win it all.

USU is guaranteed to play in at least three games during pool play with the Pool D winner advancing to the semifinals. The Aggies will play their first game Friday, March 15, against St. Louis University, the tournament hosts and fourth seed out of the Central region.

“It’s not where they normally play,” said Jon Eccles, the Utah State head coach. “I’m not sure they have an advantage there other than their fans.”

The Aggies will play the Southeast region’s third seed, Bowling Green, on Saturday, March 16. Pool play will come to a close on Sunday when Utah State faces New Hampshire, the second seed from the Northeast region.

“There are the teams that will be there that they say are the ones that should win,” Eccles said, but when you get out there, I really think that any team can surprise anybody.”

“The teams with the best talent don’t always come out on top,” USU team captain Brian Gibbons said. “It’s the guys that work hard and play together. That’s what we have this year. We’re built to win a national championship.”

The Aggies began the season ranked number one in the ACHA West region and managed to hang on to that position through every poll despite losing players to injury. The key was working as an efficient, cohesive unit.

“We work as a team and run our systems a lot better this year,” assistant captain Jordan Kerr said. “Everyone wants to win together so there are way less individuals doing their own thing.”

“Guys are here to play together and they’re not trying to pad their stats. They’re not trying to set themselves up or think they’re going to the show,” Eccles said. “These guys all have potential but right now they are focused on Utah State hockey.”

Eccles said one of the biggest reasons the team has performed so well is because the bond between the rookies and the veteran players is the strongest that he has ever seen, and that helps them play better as a team on the ice.

He also said that bond extends beyond the rink, as he has seen veterans and rookies together around the USU campus and even out on the town which he said isn’t always the case with hockey teams.

“It’s like a dream coaching these guys. They’re friends and buddies. Everyone is on the same page,” Eccles said. “They have tons of talent and we’re having a blast. It’s been a fun season.”

With a record like the Aggies have – 26 wins, four losses, one tie and one overtime loss – it would be difficult not to be having fun.

Utah State boasts an offense that scored an average of 5.5 goals per game this season by netting 176 goals while giving up just 61. That averages out to be 1.91 goals against in its 32 games this season. Eccles also said that USU has been scoring on roughly 30 percent of power play opportunities and that its penalty kill efficiency has been 89 percent.

Anchoring the rigid defense and protecting the net for the Aggies at the tournament this weekend will be Bryce Scherschel. Last season Scherschel had to split time during the season and USU’s playoff run, but that is not the case this year. He played in 25 games and has saved 94 percent of the shots he faced.

“He’s ready for it,” Eccles said. “His experience last year will help a lot. He knows what to expect. He knows he’s our guy going in.” 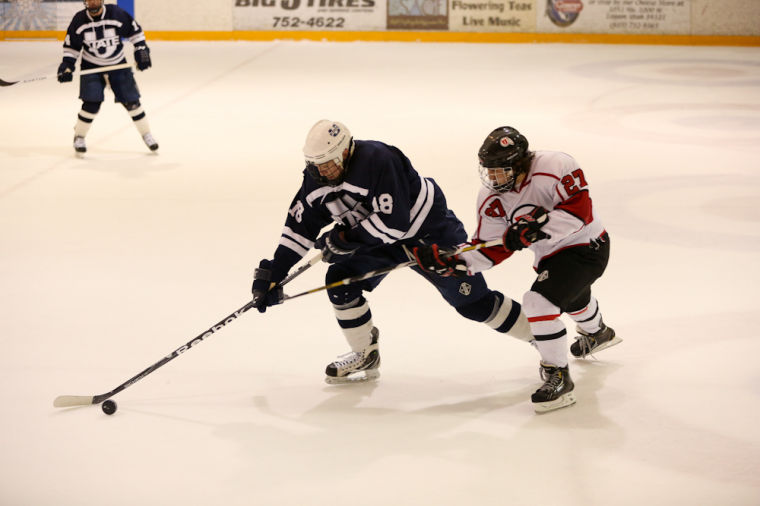 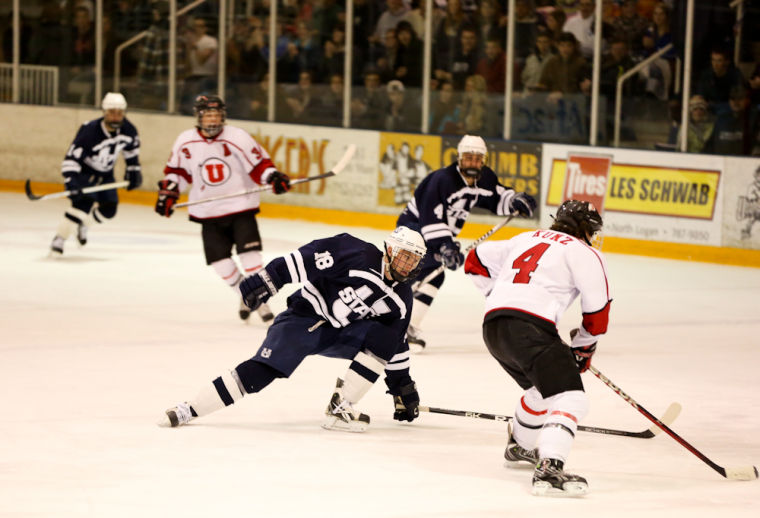