Braden Alder will compete in tie down calf roping at the National Junior High Finals Rodeo.

LOGAN – Braden Alder made a goal last year that he would qualify for the National Junior High Finals Rodeo. Now this Friday, Alder and his family will travel to Gallup, New Mexico where he will compete in tie down calf roping at the national event.

NJHFR, the world’s largest junior high rodeo, starts this Sunday and will run until the following Saturday. Alder will compete during the Tuesday morning performance and Thursday night performance. The top 20 combined times in the first two rounds will advance to the Saturday night final round. Over a thousand contestants from 41 states, five Canadian provinces, and Australia will compete for $75,000 in prizes and over $100,000 in college scholarships.

Qualifying for NJHFR took dedication and hours of practice. Fourteen-year-old Alder said he practices five to six days a week for three to four hours a day. Alder competed in eight qualifying rodeos where he then went on to compete at state finals. The top four in points qualified for NJHFR. Alder, who has done rodeo since he was just five years old, said he also had to get a couple jobs to help pay his way to the competition in New Mexico.

Besides hard work, Alder said another reason for his success is the support of his family. “I don’t think I’d be where I am today if I didn’t have my dad, my mom, and my brother’s help. They’ve sacrificed everything for me,” Alder stated.

Alder’s mother, Jenny Alder, added that rodeo is definitely a family affair. “We’re always together as a family, whether we’re practicing or going to compete,” she said.

Alder is feeling a combination of many emotions as the rodeo inches closer, but he is excited to compete in tie down calf roping, his favorite event. “It’s more of the athletic event to rodeo,” he said. “You have to rope the calf, then you have to get off your horse and go down there and flank it.” Alder also added that having a trusting relationship with your horse is a big part of doing well at tie down calf roping, since the horse has to keep the rope tight on the calf once it’s roped. Alder has worked with his calf horse, Diesel, for two years now.

Besides competing, Alder said that the great part about rodeo is making friends. “You don’t really have any enemies. You get to make friends from all over the state of Utah.” 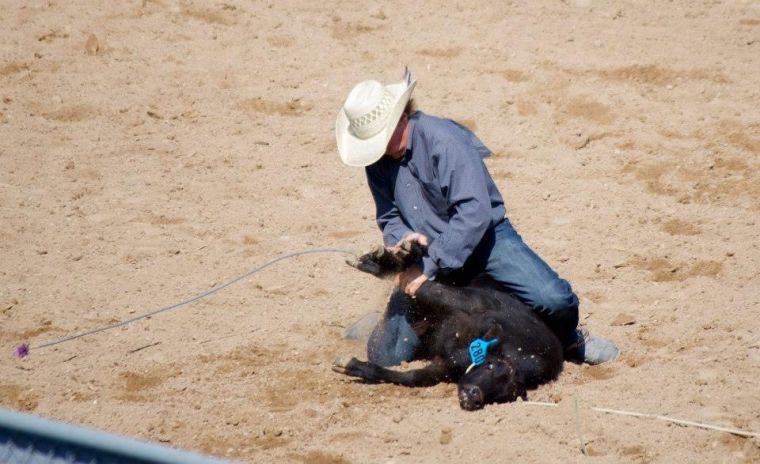 Braden Alder will compete in tie down calf roping at the National Junior High Finals Rodeo.