LOGAN, Utah – As has been the case for most of fall camp, Utah State received solid play on both sides of the ball during its first scrimmage Saturday morning on Merlin Olsen Field at Romney Stadium. The team practiced for 90 minutes with an estimated 100 snaps of the football for first year head coach Matt Wells, who celebrated his 40th birthday Saturday.

Despite allowing some yards between the red zones, Utah State’s defense controlled the early portion of the scrimmage as it held the Aggies’ offense to a pair of field goals during its first seven series as junior placekicker Nick Diaz made a 49-yard field following a 9-play, 43-yard drive and a 24-yard field goal following a 7-play, 58-yard drive.

Utah State’s first touchdown of the scrimmage came on a 16-yard run by freshman running back Kennedy Williams to cap an 8-play, 65-yard drive. USU’s next two touchdowns came on a 2-yard run and a 12-yard run by DeMartino as the first drive covered 50-yards in eight plays, while the later was a one-play drive. USU’s last touchdown was on a 12-yard pass from junior quarterback Craig Harrison to sophomore wide receiver Bruce Natson on the first play of a red zone series. Freshman placekicker Jake Thompson added a 46-yard field goal during the scrimmage, while Diaz provided the final points of the day on a 45-yard field goal.

Utah State, which is entering its second week of fall camp, will hold its second two-a-day on Monday, Aug. 12 practicing from 9:15 to 11:15 a.m. and again from 4:55 to 6:25 p.m., on the practice fields. USU will also have two-a-days on Wednesday and Friday next week, to go along with single practices Tuesday morning and Thursday afternoon.

Utah State’s second scrimmage will be on Wednesday, and its final scrimmage of fall camp will be on Saturday, Aug. 17 at 6 p.m. on Merlin Olsen Field inside Romney Stadium as part of Aggie Football Family Fun Day, which is sponsored by Macey’s.

All practices during fall camp, which concludes on Saturday, Aug. 24, are open to the public.

NOTE: All dates, times and locations subject to change.

On Joey DeMartino’s production during the scrimmage and in fall camp:

“It’s a direct reflection of how he’s practiced and trained all summer. That’s what I tell these guys, how you train and how you practice will show up on Game Day.”

“I thought all of our kickers did well. I thought that was definitely one of the four or five positives of the scrimmage. I was really happy with their distance and accuracy. They didn’t just barely make them, they made them and they were convincing makes, so I’m proud of all three of those guys (Diaz, Josh Thompson, Jake Thompson) kicking the ball.”

Overall thoughts on the scrimmage:

“Right out of the gate there was a lot of good stuff with the offense moving the ball. The defense studded it up in the end in the early red-zone, which is the mark of a great defense. That’s what they did last year and hopefully that will be the trend this year. Offensively, it’s not about the yards, it’s about points on the board. I thought the two-minute drill was executed really well by the offense at the very end. We needed a field goal to win and they did it and then Nick came in and hit that 45-yarder and drilled it. Another positive for the offense is two 1-play scores in the tight red-zone. Defensively, that’s unlike them, but I thought there was good give and take so there were pluses on both sides.”

Were you pleased with how well the defense hit and tackled today?

“I think it’s the mark of a veteran defense. They bring their ‘A’ game; they bring their energy and their effort and that stuff shows up. We have a lot of work to do with those threes though.”

On certain players not getting very many reps during the scrimmage:

What did you see at the No. 2 quarterback?

“Still a lot of question marks, for me. We’ll go back in and look at the tape and evaluate it, but still a lot of question marks with who can go in and execute just our base stuff. Time will tell, they just need more reps. They were going against a good defense today, all those twos went against the one defense the majority of the day so that’s a good test for them.”

What newcomers have jumped out at you thus far during fall camp?

“I think just the normal guys from the junior college kids. Ronald Butler, Jeremy Morris, Marwin Evans, Keylon Hollis, Rashad Hall and Bill Vavau. Those guys are going to be able to come right in and play a role, and that role is going to continue to be defined by them, not by us as coaches but them as players for the next two weeks of training camp and probably even as the season rolls on.”

Is there one thing you would like to see cleaner between now and the next scrimmage?

“Yeah, I thought we were a little sloppy on some of the parts on offense, from the administrative signaling and on the ball and some of that stuff. Some of that was with the young players and wasn’t with the ones, but it doesn’t matter. You can not beat yourself before the snap, that’s an unforced error in football.”

Offensive thoughts on the scrimmage:

“For the offense as a whole, I thought all the ones, twos and threes were blocking really well today and staying on their assignments. As for everybody else we had a few missed assignments and we just need to work on getting our plays down and getting signals quick. I know I had a few mistakes today. As a whole, I think we did pretty good in the red zone when we needed to score points.”

On your play today and taking advantage of opportunities:

“It’s not that hard when you have a great offensive line blocking for you. They really opened up the holes for me so it was pretty easy to get my reads down. There wasn’t a whole lot of commotion in the backfield, so it was easy to just pick a hole and run straight up the middle. All the credit goes to the offensive line and the perimeter blocking.”

On your first touchdown:

“The receivers locked up the outside and the linemen were locked up on the backers so it was easy to get in. All the credit to them.”

On the jump over defenders:

“When we were getting ready, Coach Wells said ‘If you want to be all-conference or an All-American, then play like it.’ I just tried to put myself in another zone today. I try to be the best I can be each and every day. When I see somebody on TV do a crazy move, I try to imitate it if I can. That hurdle was fun to do. I thought I was going to get upended, but I made it.”

“Skill-wise, working with Dave Scholz, our strength coach, he helped me drop about 18 pounds and lose six percent body fat. I’ve just been getting my body in condition to run a lot of plays. Before, I felt sloppy and like I couldn’t last for more than one or two plays. Now I feel very conditioned, my strength is where it needs to be and I can last longer.”

On the depth of the running back position:

“We’re deep right now. It’s good because in the spring we were pretty banged up with only about three backs playing. It’s good to have a lot of depth. The younger guys are coming up in their playbooks and did very well today. There have been practices where there has been a lot of mistakes, but they were all on top of their playbooks today. Then there’s Joe Hill and Robert Marshall who have been here playing and they’re always ready to go. I’m just happy to be a part of that group and help contribute to this offense.”

Defensive thoughts on the scrimmage:

“I think the defense did really well. There were a few breakdowns like that one-play touchdown in the red zone. Other than that, I think we did pretty well at stopping the run. The screens are probably what hurt us the most so we’ll work on that, but it went well.”

On stopping the offense from running the ball:

“That’s what they want their identity to be. It’s been a work in progress. I trust they’ll be able to run the ball, they were able to last year. That’s something we pride ourselves on is being able to stop the run. We don’t want it to be easy for them to do that.”

On switching sides of the line:

“I’m a little bit more of an edge rusher. It’s essentially the same thing, I just come off the edge as a pass rusher a little more.”

On seeing limited reps in camp:

“We want to carry that on from last year because that red zone defense was really great. We obviously wouldn’t like them to be driving down the field on us, but once we get there, ultimately the game is about points. If we can prevent points that’s the biggest thing.”

Offensive thoughts on the scrimmage:

“It was fun to get out here, just knowing that our coaches are really getting into the scheme against the defense and we’re really learning our offense. It was great to get out here and compete. Personally, I found satisfaction seeing the younger guys get out there and compete. Darell Garretson is my ‘little brother’ and he fought his butt off today. He’s going to be a good one in the future.”

“It was great. It was something I kind of expected, but they showed me a little more than what I expected to see as far as the elusiveness after the catch and starting the run. It’s one of those things that Coach Wells definitely works with them. He wants to have pride in his receivers, and the yards after the catch. It’s really Coach (Kevin) McGiven’s job and it’s my job to make sure they’re open and they get the ball.”

“He’s one of those shining stars that gets overlooked a little bit. He’s been working hard. Ever since last spring he’s been putting in all the work. He’s a senior this year so he definitely has something to prove. He’s going to be a good back for us this year. I definitely see a lot of production from him in the future.”

On the offensive line opening holes:

“Today they definitely opened up some holes. They showed everybody why they’re a big name in the Mountain West as far as a starting five offensive line. It’s one thing I’m excited about this season, standing behind them and knowing I have time and can get running lanes.” 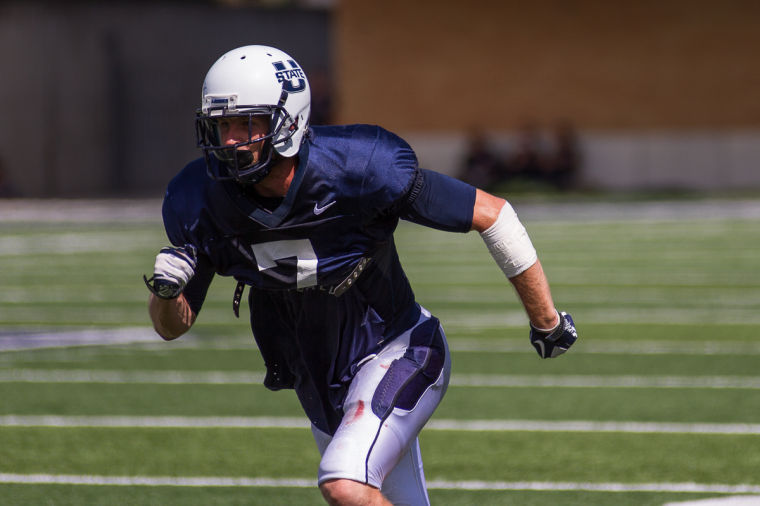 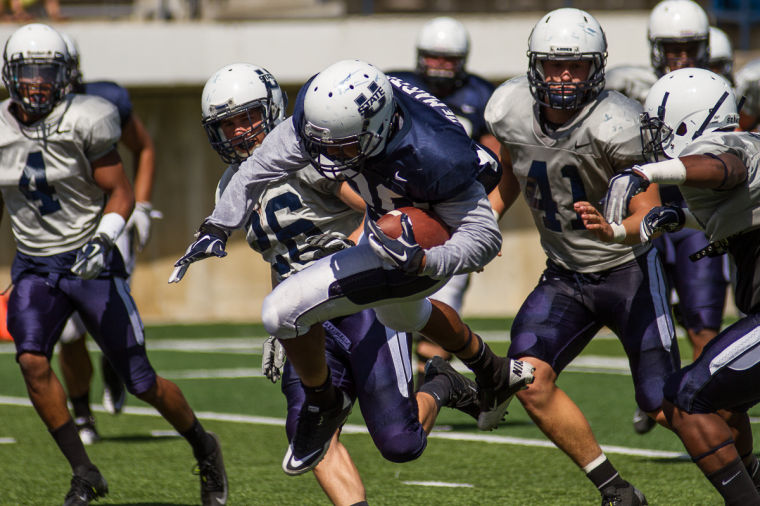 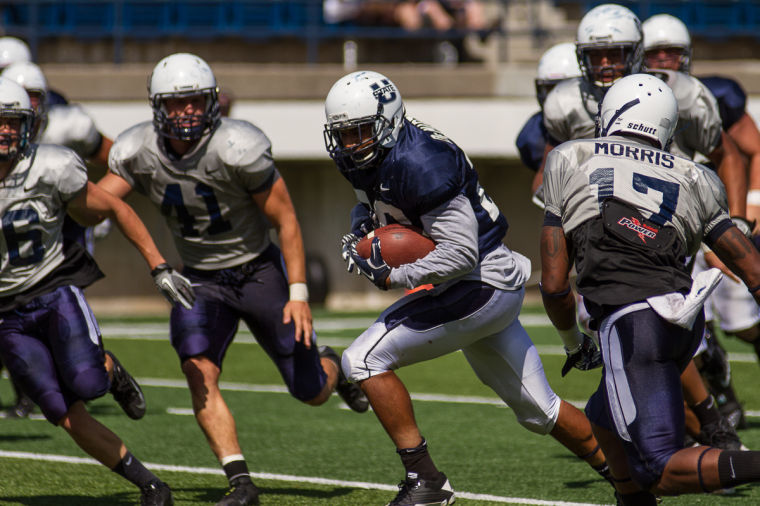 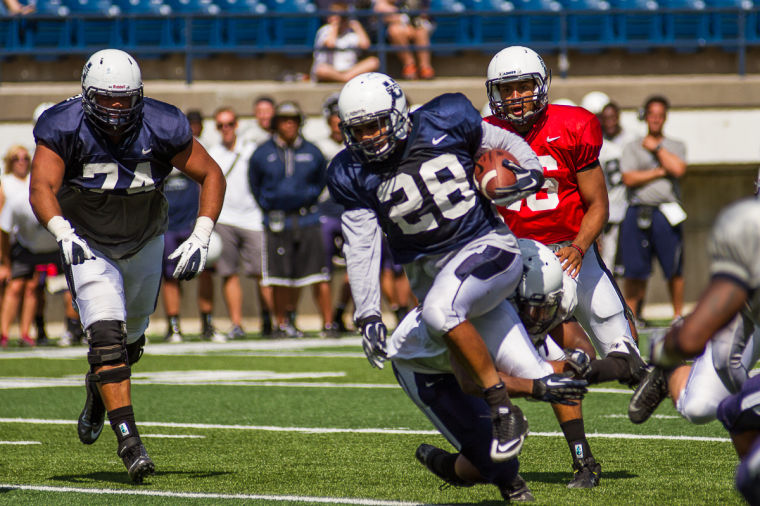 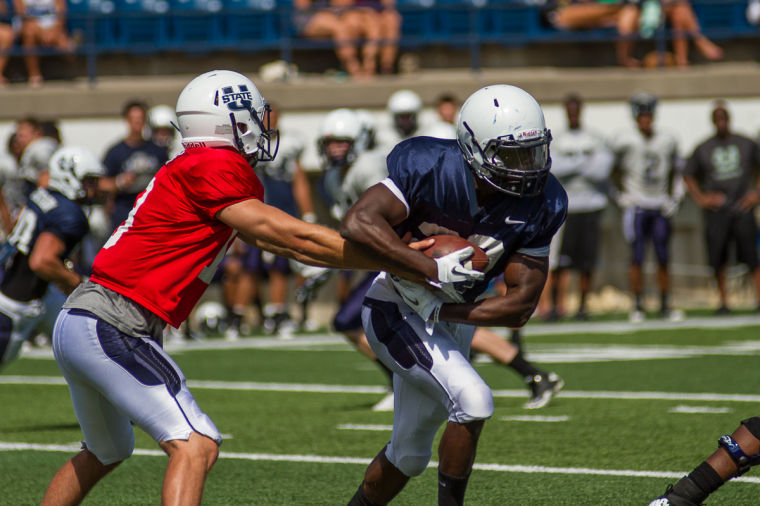 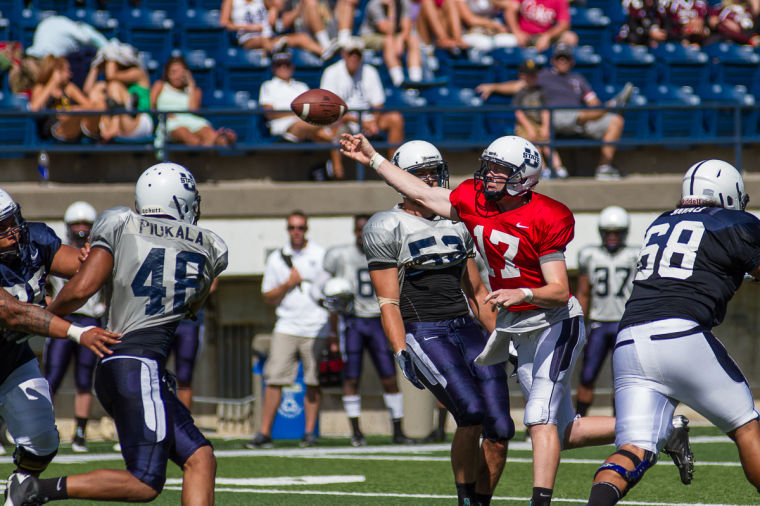 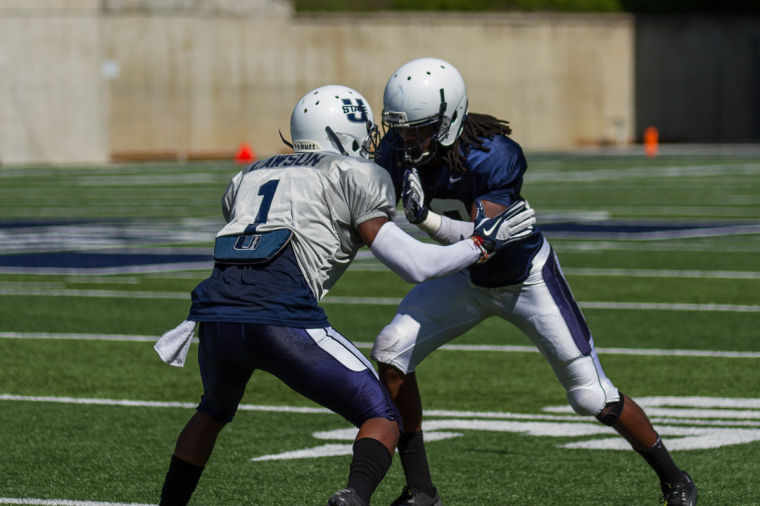 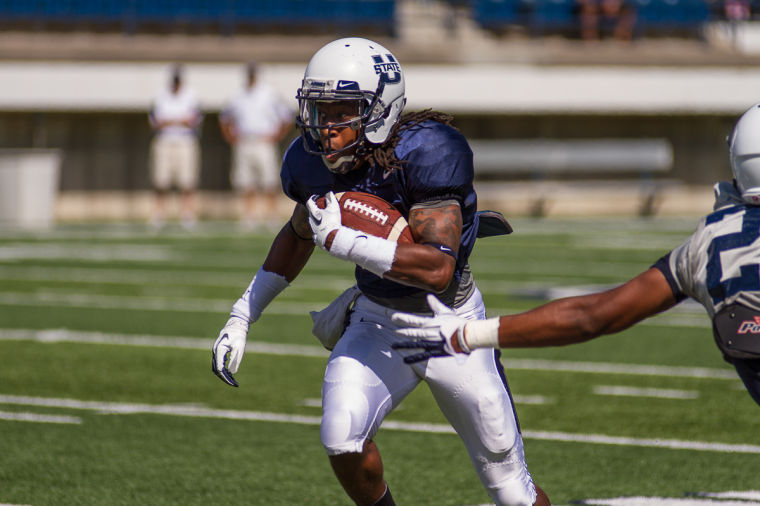 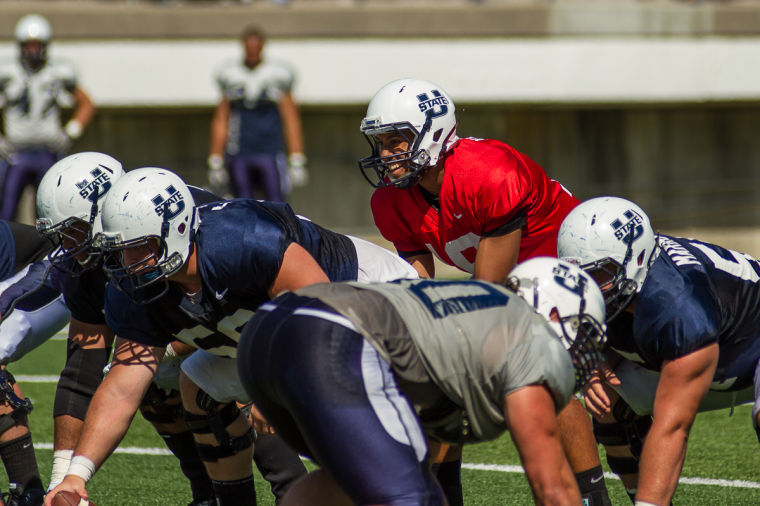 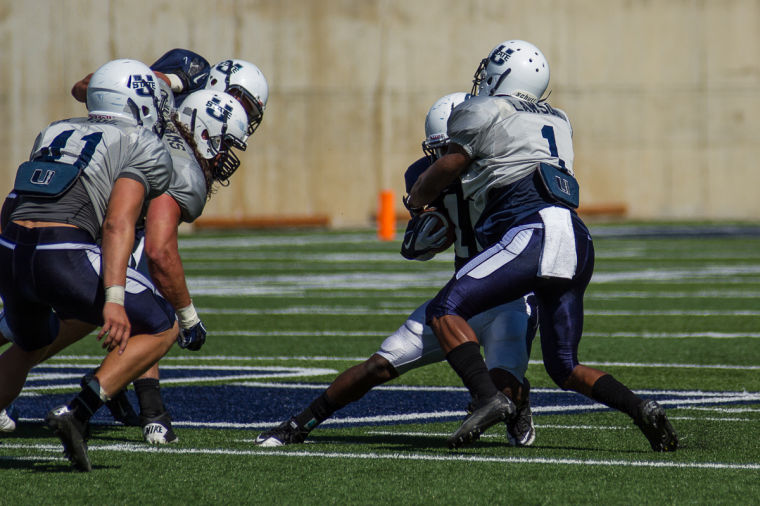 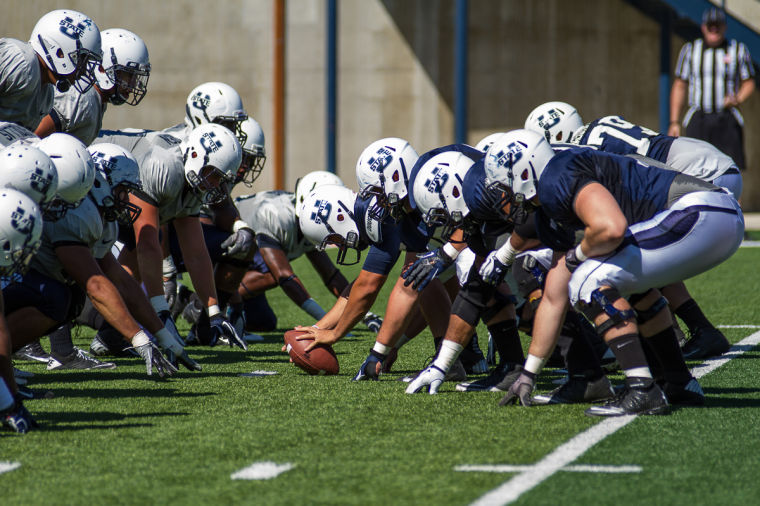 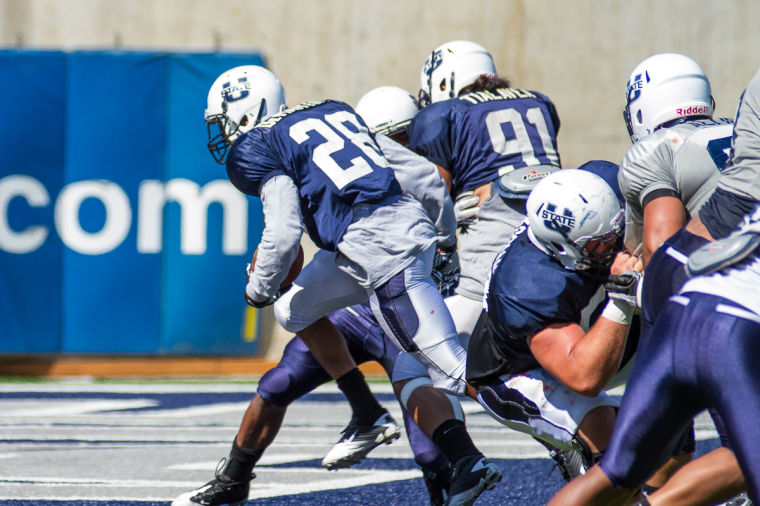 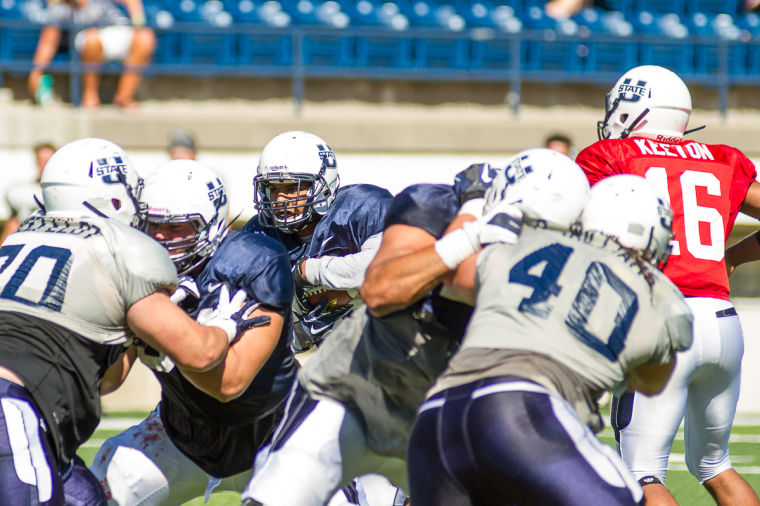 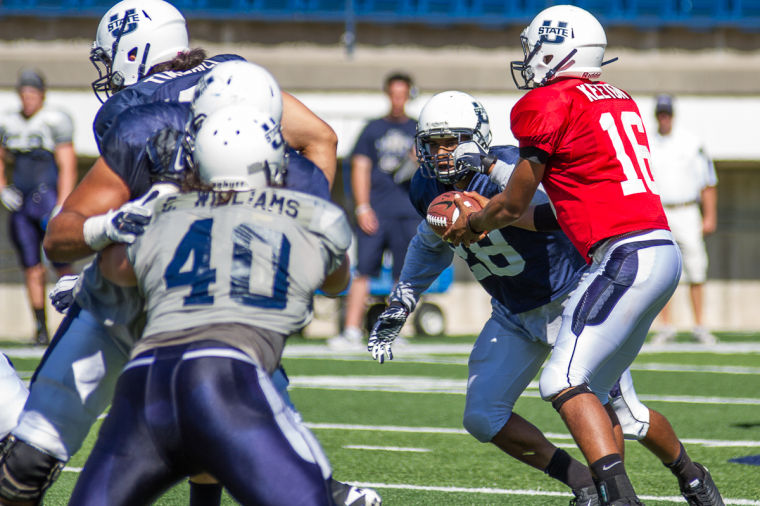 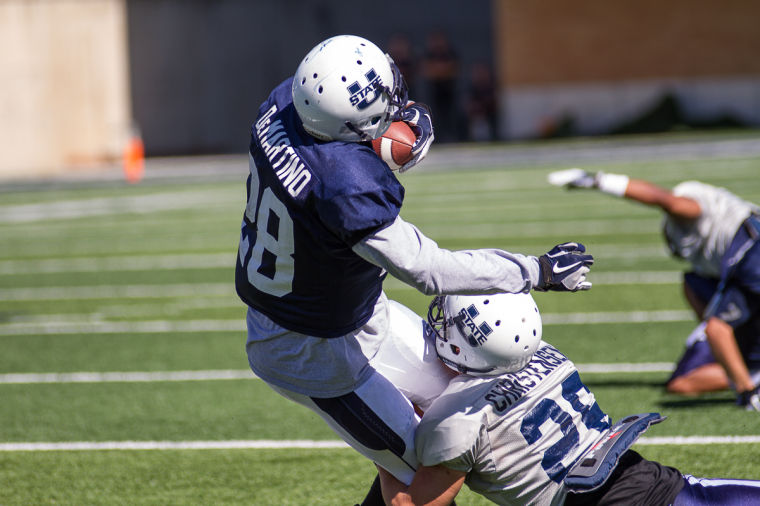 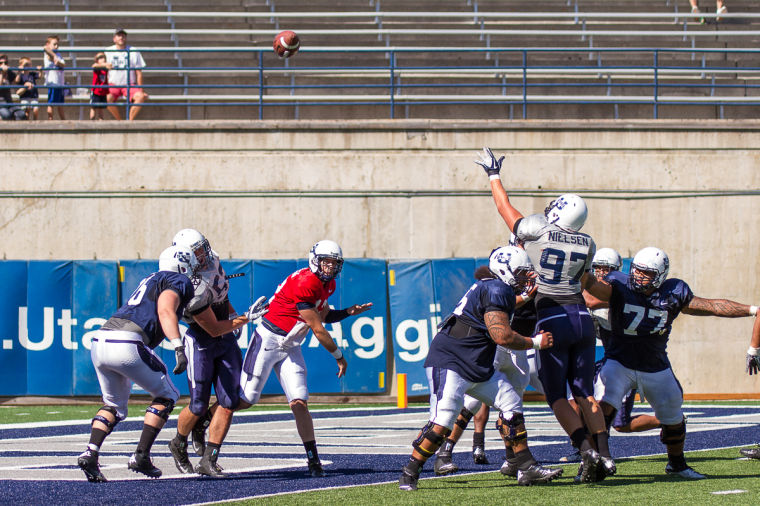 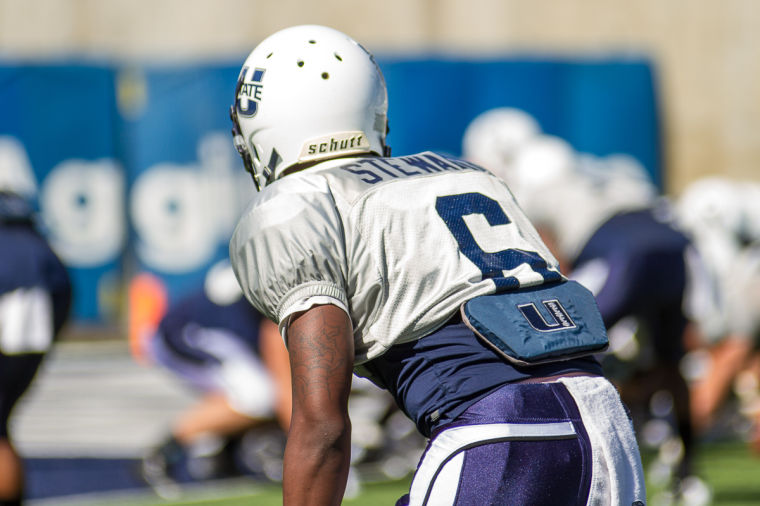 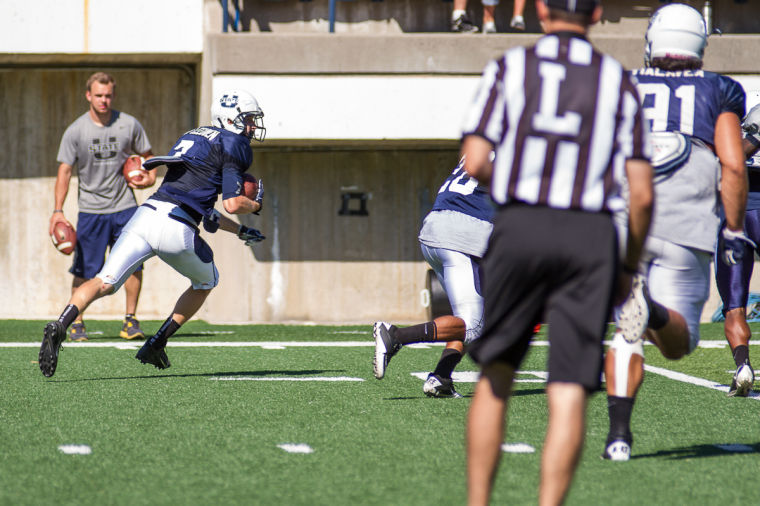 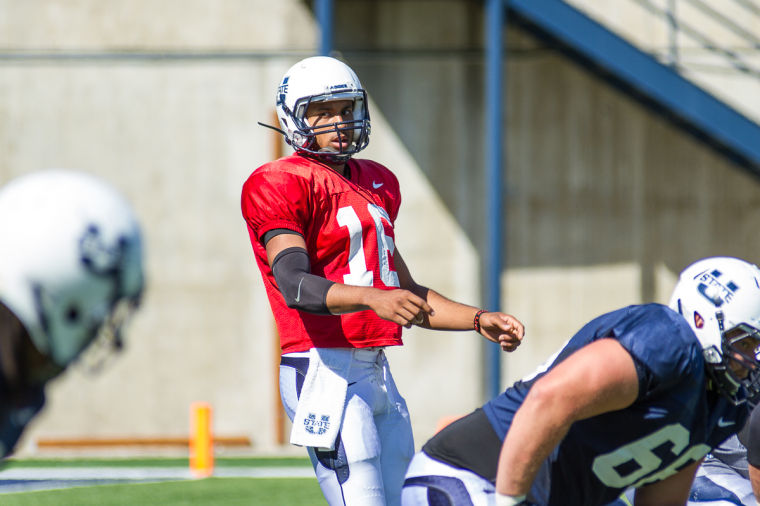 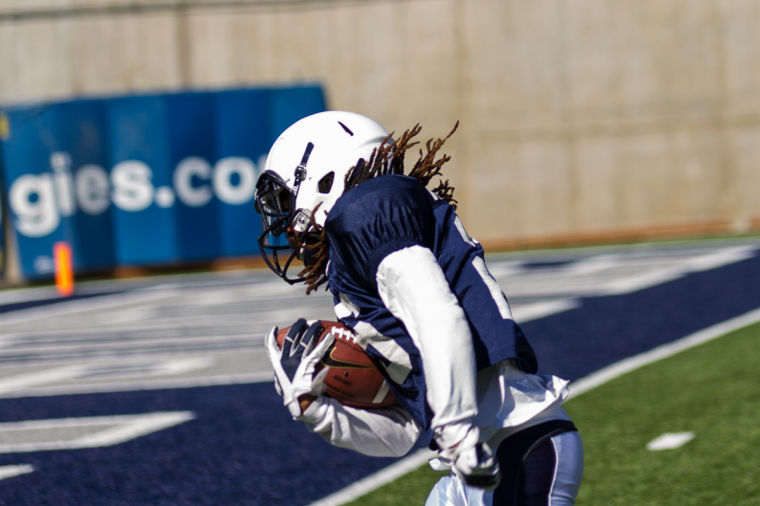 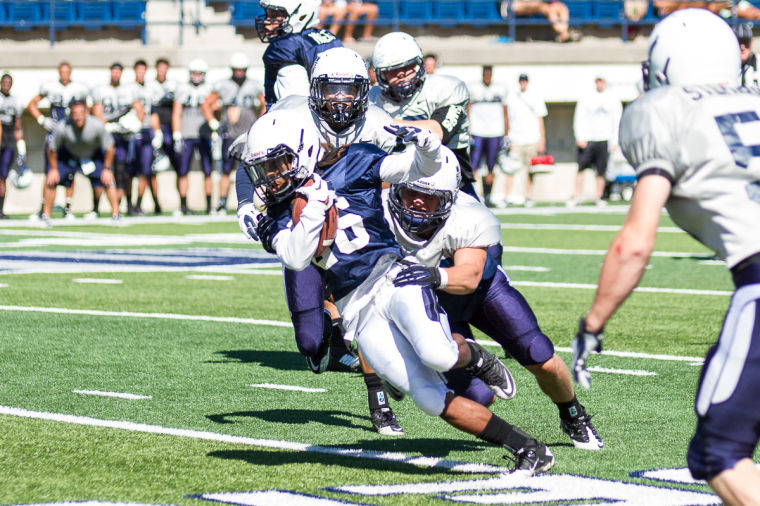 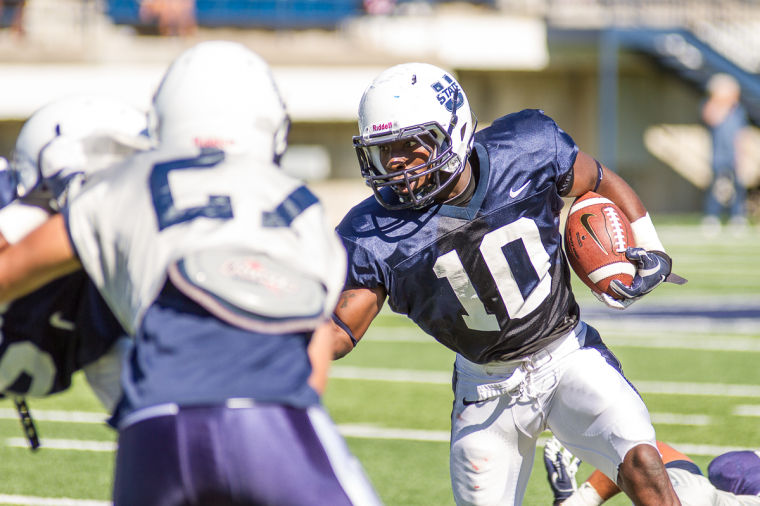 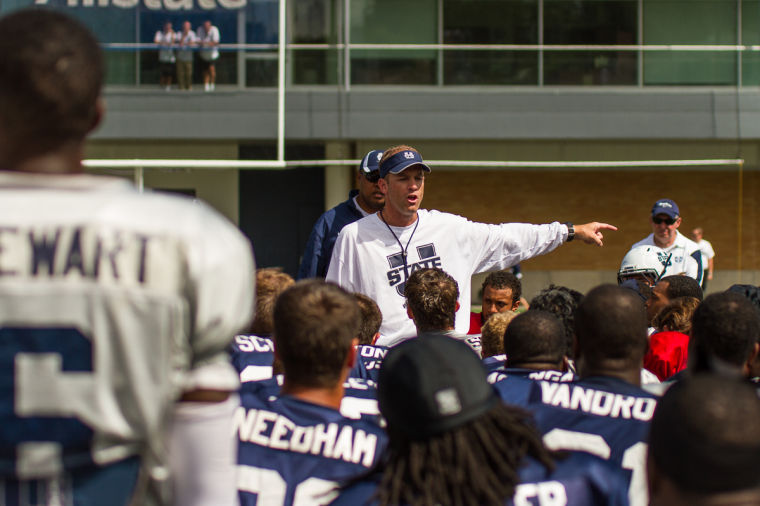