This is an artist’s rendering of Huntsman Hall, which will be part of the Jon M. Huntsman School of Business.

LOGAN — Jon M. Huntsman, Sr. helped break ground on Aug. 26 for Huntsman Hall, a new state-of-the-art $42 million business building that will be named for him on the Utah State University campus. He described the new building as a place where integrity and ethics would be emphasized.

Jon and Karen Huntsman and a number of other dignitaries were at the ceremonial groundbreaking for the 117,000-square-foot addition that will wrap around the south and west sides of the George S. Eccles Business Building.

Huntsman was the lead donor for the new building, which is scheduled to be completed in the fall of 2015. The building will be designed to encourage collaboration, teamwork and exploration in business education and will feature 21 classrooms and 21 meeting rooms. Huntsman Hall will include several centers of excellence focused on entrepreneurship, leadership and international business, school officials say. Two thirds of the building’s funding comes from private donors and one-third from state of Utah sources.

Huntsman spoke at the event along with Jeffrey D. Clark, the founder of J.D. Clark &amp; Company, who also was a major contributor to the building.

Dean Douglas D. Anderson described early design deliberations when funding challenges forced school officials to consider scaling back the facility. Jeff Clark argued in favor of the larger structure that would be needed to meet the needs of future generations, asking them to “Go big or go home.”

“Jeff drove us to believe in our dream that we could have a classroom building second to none,” Anderson said, “where faculty and students could work collaboratively to create entrepreneurial opportunities…”

Anderson said that without the support of Jon and Karen Huntsman and Jeff and Bonnie Clark, “this day would not be possible.”

Huntsman praised the role Anderson has played at the university and Albrecht’s leadership. Huntsman said the building would influence and train “honorable and respected executives in the global industry of tomorrow.”

“Above and beyond one’s study of economics, business and finance, may our Huntsman students resolve that the greatest experience for the human heart will be to reach down and lift up another individual who may be struggling,” he said.

Albrecht said the construction of the new building launches “a new era,” calling Huntsman Hall “a beautiful state-of-the-art building that will assist us as we move to an even higher level of achievement.” 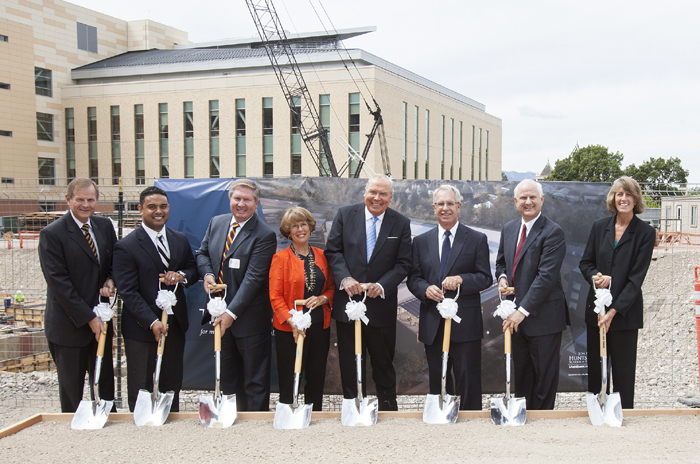