Cade Watterson races to the end zone after hauling in a 42-yard touchdown from Chase Nelson on the Grizzlies' opening drive.

“Bottom line is you have to get put in the end zone, it’s not about total yards,” Logan head coach Mike Favero said. “Our offense needs to finish when they get there and we need to keep playing with great passion and intensity on defense.”

Despite 450 yards of offense from senior quarterback Chase Nelson, the Grizzlies offense managed just one touchdown – a 43-yard pass from Nelson to Watterson on the game opening drive – against the stingy Braves defense.

Both teams were denied on each trip inside the red zone, including each team being stuffed inside the 2-yard-line.

Penalties also hurt the Grizzlies, as a 91-yard drive resulted in a missed field goal attempt. Logan was hit with 40 yards in penalties on the drive, including 20 once the Grizzlies entered the red zone.

“(Penalties) are part of the game and you play through them but they are what they are,” Favero said.

Austin In and the Logan defense also stopped the Braves three times inside the 10-yard-line – twice on the goal line – with In recovering a fumble on one Bountiful possession, Taylor Compton broke up a pass on fourth down in the end zone, and the defensive line stopping the run inside the 1-yard-line.

After In’s fumble recovery, Nelson marched the Grizzlies 96-yards to inside the 2-yard-line, but his quarterback sneak came up short and Logan turned the ball over on downs.

The defense was up for the challenge. Compton intercepted two passes, his first of which set up the Grizzlies’ field goal and his second iced the game with a minute remaining.

“It was there, it came to my hands, it just happened to get the deal over for the win,” Compton said. “It was a defensive battle for sure. Two great defenses played tonight. …  Credit to Bountiful, they played some tough defense, but so did our guys.”

Logan improved to 3-0 with the win. The Grizzlies return to action at 7 p.m. on Friday, Sept. 13 against the Ogden Tigers. 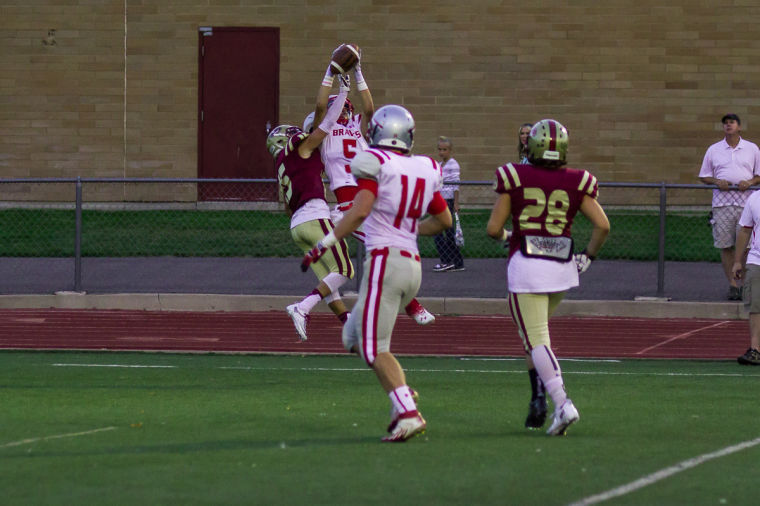 Logan 's Taylor Compton breaks up a 4th down pass in the end zone to deny the Bountiful Braves a touchdown.