A school bus carrying nearly 30 students from Canyon Elementary School crashed into a tree in Paradise Monday afternoon. Six of those students were transported to Logan Regional Hospital and Cache Valley Hospital with minor injuries. According to Utah Highway Patrol Sgt. Kade Brenchley, one student had a “pretty good laceration” but none of the injuries were life threatening.

Sgt. Brenchley said a substitute bus driver was taking the students home from school and at approximately 3:47 the driver was reportedly distracted by a child who stood up in the back of the bus. She looked up into her rear view mirror to assess why the student was standing and failed to navigate a turn on SR 165 (at 210 W. 9100 S.).

The driver missed the turn, hit an arrow sign, drove onto the snow, went down an embankment, knocked down an 18″ tree, went approximately 30-40 more feet and then struck another tree that was approximately 20 feet tall on the right side of the bus.

“My information is that road conditions did not play a factor in causing the accident,” said Kirk McRae, director of Human Resources for the Cache County School District.

“Our transportation supervisor was on site about 20 minutes after the incident,” McRae continued. “The school principal, Kelly Rindlisbacher, was there at about the same time as well. They have been contacting parents.”

McRae said an additional bus was routed to the scene to help transport students home.

“The accident is under investigation and we will follow through with our safety protocols with the driver, as well as conducting a drug test,” McRae explained.

Sgt. Brenchley said the driver was cited for failure to operate within a single lane.

“Quite a few parents were on scene,” Sgt. Brenchley said. “They were already waiting at bus stops or got word quickly about the accident.”

Sgt. Brenchley said a number of students were picked up by their parents before emergency crews arrived on scene.

“It’s understandable that parents are concerned about their children,” Brenchley continued, “but they need to stay on scene until emergency crews arrive and assess them.”

McRae said that if parents have any further questions about the accident they can contact Canyon Elementary or the district office Tuesday morning. 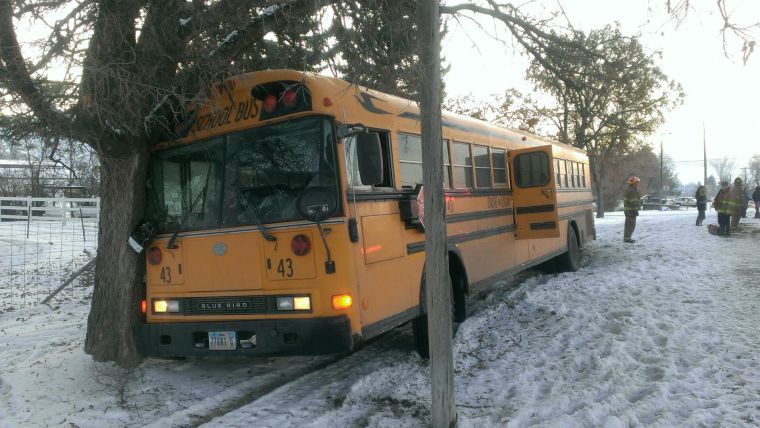