Photo showing damage to the customer's car, after natural gas hose came loose, while they were refueling.

Questar Gas spokesman Darren Shepherd said the accident was reported to them Friday just after 7 a.m.

“We received a call from someone at this station that the hose to one of the compressed natural gas refueling pumps broke loose of a vehicle that was refueling there,” said Shepherd. “The hose started to just whip around as the pressure of the gas was coming out. It was banging against the car and the glass on the car.”

The hose ended up damaging the side of the car and breaking the side and rear windows, before the gas was shutoff.

The shattered glass led some customers to believe that there had been an explosion.

Logan City Fire Marshall Craig Humphreys said when crews arrived on the scene, they determined the windows were broken out by the loose hose and that none of the gas was ever ignited.

Shepherd said Questar is investigating whether the hose was connected correctly or if there was a fault in the connection.

“Those are the things we’re looking at right now,” said Shepherd. We haven’t got a whole lot of information on it but we’re certainly taking a look at the connector, how it connected to the vehicle and any of the fittings that are on the end of the hose, to make sure these kind of things don’t happen.

Shepherd said this is the first time something like this has happened at one of their gas pumps. 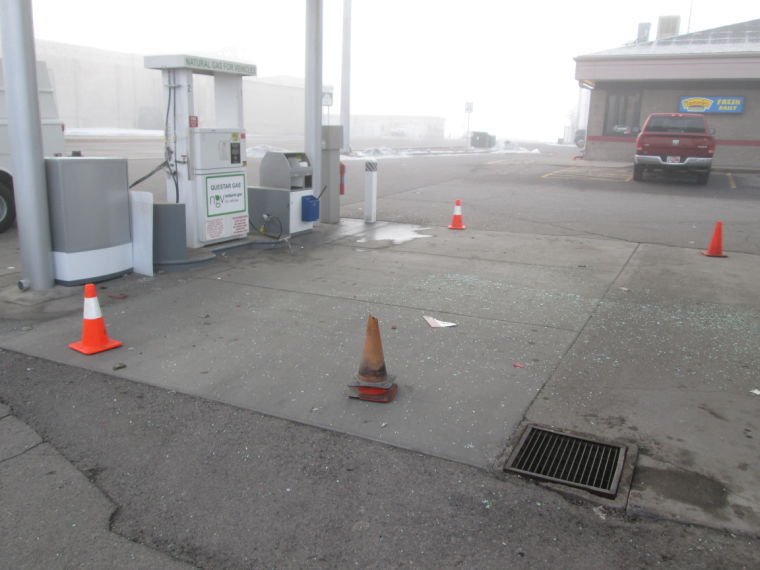 Cleanup beginning after a natural gas hose came loose from a customers car, breaking their side and rear windows.