McCade Leishman, 27, of Wellsville, suspected of selling drugs in Cache Valley.  Leishman was arrested Wednesday, March 19, 2014, at his home.

LOGAN — A 27-year-old Wellsville man suspected of selling drugs in Cache Valley was arrested earlier this week, at his home. McCade Leishman was arrested by deputies from the Cache County Sheriff’s office in conjunction with the Utah State Bureau of Investigations and the Cache Rich Drug Task Force.

Logan City Police Assistant Chief Jeff Curtis said the drug task force began investigating Leishman after he was found with large amounts of marijuana during two traffic stops in 2013 and one in 2014.

“Each time we arrested him, he had larger amounts of product,” said Curtis. “So it kind of clued us in and we were able to get enough information to obtain a search warrant and went in and served the search warrant.”

The Utah Highway Patrol, who stopped Leishman each time, reported he had eight pounds of marijuana the first time, one-and-a-half pounds the second time and 67 pounds the third time.

Curtis said Leishman was arrested peacefully Wednesday afternoon. He was booked into the Cache County Jail on charges of possession of marijuana, possession of drug paraphernalia and possession of a firearm by a restricted person.

A 22-year-old man was also arrested at the same time. Curtis said Nicklas Leishman was charged with several misdemeanors and later released.

Curtis said investigators believe that Leishman was selling a large amount of drugs in the valley.

“These kinds of people, that are selling that kind of quantities are some of our main players in the valley,” said Curtis. “It’s always good when you can get one of those.” 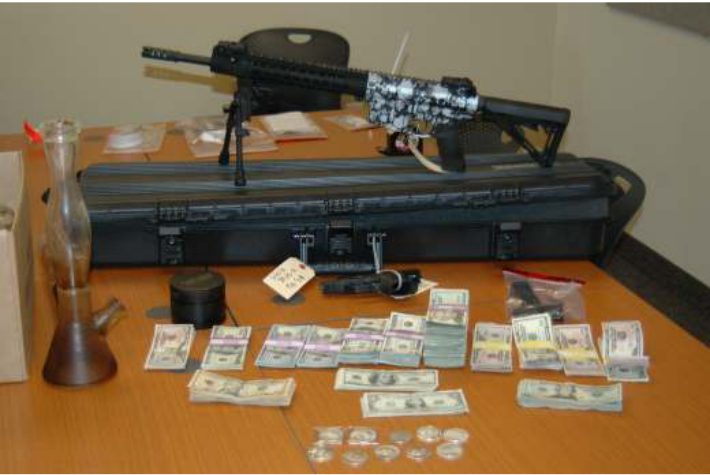 $43,455 in cash, an assault rifle, hand gun, 6.6 grams of marijuana, drug paraphernalia and packaging materials seized during a search of a Wellsville home, March 19, 2014.  Two residents at the home were arrested, McCade Leishman, 27 and Nicholas Leishman, 22.