Fackrell, a 6-5, 245-pound junior from Mesa, Ariz. (Mesa HS) was named an honorable mention Sophomore All-American by College Football News and earned second-team all-Mountain West honors a year ago as he finished the season ranking first on the team with 13.0 tackles for loss, tied for first with two forced fumbles and second with his 5.0 sacks, while ranking fourth on the team with 82 total tackles (37-solo, 45-assist). Overall, he averaged 5.9 tackles per game to rank 35th in the Mountain West. During the season, he recorded three quarterback hurries, recovered one fumble, intercepted one pass and registered one pass breakup. He was also named the Mountain West’s Defensive Player of the Week and College Football Performance Awards National Linebacker of the Week following USU’s 47-10 home win against Hawai’i as he recorded nine tackles, including 0.5 for loss, to go along with an interception return of 99 yards for his first career defensive touchdown, which ranks as the third-longest interception return in Utah State and Mountain West history.

Vigil, a 6-2, 232-pound senior from Clearfield, Utah (Clearfield HS) earned second-team all-Mountain West honors a year ago as he ranked second on the team, seventh in the conference and 42nd in the nation with 8.9 tackles per game. Overall, he finished the year with 124 total tackles (47-solo, 77-assist), which was tied for the 17th-most in the nation at the FBS level. In all, his 47 solo tackles led the team, while he was also tied for the team lead with two forced fumbles and two fumble recoveries. He also ranked second on the team with 12.5 tackles for loss and was tied for fifth overall with 2.0 sacks, while adding one interception, one pass breakup and one quarterback hurry.

Vigil is also one of 40 college football players named to the College Football Performance Awards Linebacker of the Year Trophy Watch List, and a preseason first-team all-Mountain West selection by both Phil Steele and Athlon Sports heading into the 2014 season.

The 45th Rotary Lombardi Award will be held on Wednesday, December 10, 2014 at the Bayou Music Center in Houston, Texas.

Utah State concluded the 2013 season by winning six of its final seven games to tie the 1960 and 1961 teams for the second-most wins in school history. With its win against Northern Illinois, Utah State posted back-to-back bowl wins for the first time in school history as it played in its third-straight bowl game, also a first at USU. Utah State also set the school record for conference wins as it posted a 7-1 league mark in its first season in the Mountain West.

Utah State ended the year ranking tied for 37th nationally in both the Associated Press and ESPN/USA Today Coaches’ polls with two votes each, marking the second time in as many years that USU has concluded the season ranked among the top teams in the nation as the 2012 team was ranked 16th in the final AP poll, 17th in the final coaches’ poll and 22nd in the final Bowl Championship Series (BCS) standings.

Utah State will open the 2014 season on Sunday, Aug. 31 at Tennessee and play its first home game the following weekend against Idaho State on Saturday, Sept. 6 at 6 p.m. 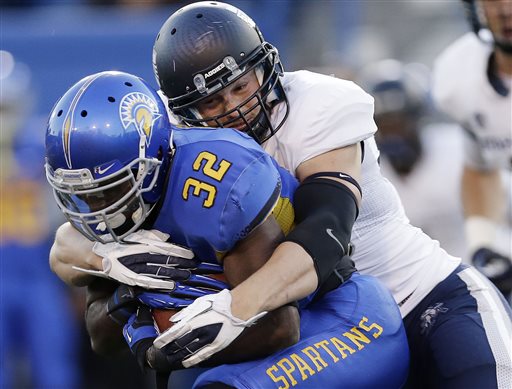