LAS VEGAS (AP) — Rookie saddle bronc rider Spencer Wright used a fifth-place in the 10th and final round of the National Finals Rodeo on Saturday night to move atop the world standings and win the gold buckle.

Wright, of Milford, Utah, earned $205,388 to top the PRCA world standings after not leading the category in any prior day at the NFR. He ended up second among all NFR competitors with $145,123 in earnings. Wright, whose three older brothers also qualified for the NFR, also won the event’s aggregate standings with 807.5 points over 10 rides after scoring a 79 on Lunatic from Hell.

“I would hope they’re all happy for me and proud of me. They’re my brothers and it makes me happy that they were going crazy for me,” Wright said. “I came in here expecting to do the best I could do, and I guess I really have. This is hard to describe.”

Cort Scheer of Elsmere, Nebraska, finished close behind Wright in the world standings with $195,586 after not securing a check with a 71 on Big Fork. He also finished second in the aggregate standings with 764 points over 10 rounds.

Cody DeMoss of Heflin, Louisiana, won round 10 with an 86 on Resistols Top Hat.

In steer wrestling, Luke Branquinho of Los Alamos, California, won his fifth gold buckle with $202,380 and the NFR aggregate standings crown with a time of 41.60 over 10 head despite not placing among the top six in 5.0 seconds in the final round.

Branquinho, sidelined with an injured right arm from July 18 until the NFR’s opening round, became the eighth individual to win at least $1 million in career earnings.

“To be able to win it is pretty meaningful to me,” Branquinho said. “Every time you have to have surgery on a tendon repair there’s a chance you may not come back. But I took the risk and my therapist at home and the doctor that put me back together said everything healed up and looked great.”

Dru Melvin of Hebron, Nebraska, won the final round in 3.40.

In team roping, header Clay Tryan of Billings, Montana, and heeler Jade Corkill, of Fallon, Nevada., won their first gold buckle with $220,058 each and their second consecutive NFR aggregate standings championship with a time of 70.10 for 10 rounds after placing fourth in 6.0 during round 10. The defending world champions were the only pair to have 10 successful rounds.

They were trailed in the world standings by Trevor Brazile of Decatur, Texas, and Travis Graves of Jay, Oklahoma, with $176,183 each. Brandon Beers of Powell Butte, Oregon, and Jim Ross Cooper of Monument, New Mexico, won round 10 in a time of 4.1.

In tie-down roping, Tuf Cooper of Decatur, Texas, became a three-time world champion with $241,734 and the NFR aggregate champ with a time of 89.70 over 10 rounds after not finishing among the top six with a time of 9.40.

Brazile ended up second in the world standings with $210,315 and runner-up in the aggregate race with a time of 93.10 for 10 rounds. Cooper, however, foiled Brazile’s bid for his third world crown, as he had won the steer roping and all-around titles in 2014.

Brazile was first in NFR tie-down roping earnings with $116,466.

Matt Shiozawa of Chubbuck, Idaho, finished in third place in both the aggregate standings with a time of 97.60 for 10 rounds and in the world standings with $199,888 following a last-place time of 17.50 in round 10.

“I just had to go tie one down,” Cooper said. “Those guys (Brazile and Shiozawa) were going for a world title. They weren’t backing off and playing it safe. They wanted a gold buckle just like everybody grows up roping wants, and hats off to them for sticking to that.

Six-time champion Cody Ohl of Hico, Texas, won the final round in 6.80.

In barrel racing, Fallon Taylor of Whitesboro, Texas, who has earned $276,441 in the world standings, claimed her first gold buckle after finishing second in 13.96.

Lisa Lockhart of Oelrichs, South Dakota, won the NFR aggregate standings with a time of 144.93 over 10 rounds following her sixth-place ride of 14.02. She was second in the world standings with $265,514.

In bull riding, Sage Kimzey of Strong City, Oklahoma, who clinched his first world championship in round eight and the NFR aggregate crown in round nine, ended up with $318,631 and a score of 671 for eight rides. Kimzey was the lone rider to cover eight of his 10 bulls and the only one of seven bull riders ever to win four rounds at one NFR.

Kimzey also led all NFR competitors with $175,466 earned over 10 rounds here. He became just the second bull rider to win the world championship during his rookie season. The only other first-year rider to win a gold buckle was Bill Kornell in 1963.

Tyler Smith of Fruita, Colorado, won the 10th round with an 84.5 on Hot Wired.

In all-around, Brazile closed out the season with $494,369 in earnings. 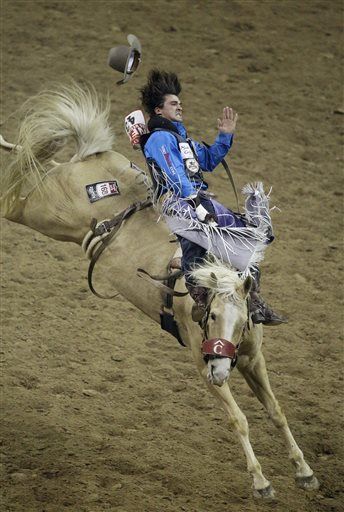 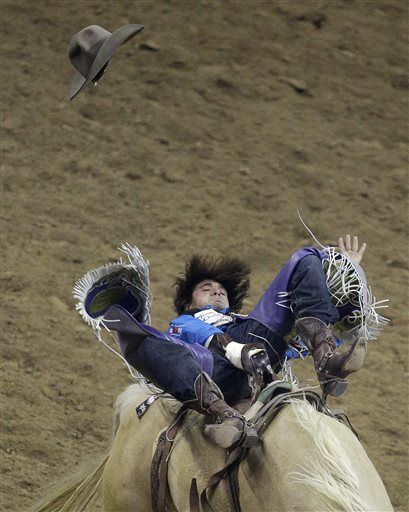