LOGAN – John Hartwell was introduced Wednesday morning as the new athletics director for Utah State, and he promised the Aggie fans championships.

President Albrecht introduced Hartwell as the new athletics director in front of a crowd in the Wayne Estes Center. He said USU will miss former athletics director Scott Barnes, but said he believes the right replacement was found.

“We weren’t looking to fix something” he said. “We weren’t saying there are lots of problems or we need someone who will come in and do a fix-it job. We’re in a really good place, so we want someone who can come and recognize that foundation but then be in a place where he can take us to the next level.”

During his 17 minute introductory address, Hartwell talked about his excitement to be a part of the Aggie family, discussed challenges facing Aggie athletics and promised to be able to compete with the bigger, better funded athletic departments in the area.

He said one of the first things he will do is meet with coaches and figure out what each coach believes is needed to win championships. He also made it clear the reason he has a job is because of student athletes and said his first priority for them is academics. He said USU has already set the academic bar high for its student athletes and he wants to provide them with all the resources they need to continue to help them succeed.

“We’ve got to make sure that that is our number one focus,” he said.

The next priority, he said, is winning.

Hartwell said finding external sources of funding will be crucial for success. According to Troy University’s athletic website, Hartwell was instrumental in helping to obtain funding and construct new athletic facilities.

“We’ve got to continue to stay on the cutting edge from a recruiting standpoint,” he said. “The term I like to use is ‘wow factor.’ We’ve got to make sure that in all of our facilities we’ve got the ‘wow factor.’ Because like it or not, 17 and 18-year-old kids are coming to our campus as prospects, we’ve got to make sure when they see our facilities, and certainly when they go back home or they go to folks we’re recruiting against they say, ‘Man, those facilities at Utah State.’

“Yes, that takes dollars and cents, but my job and our job as an athletics department will be to continue to cultivate and increase those external funding sources.”

During his address, he took time to introduce his wife, his two daughters and talk about his son who couldn’t make it to the press conference. Hartwell said family values are important to him, which is one of the reasons he said he was able to move to Utah – a place where he believes family values are honored like they are in South Alabama. Hartwell held his 6-year-old daughter Lauren up to the microphone to give her an opportunity to read a short speech she wrote.

Hartwell is expected to move to Logan and start working mid-July. 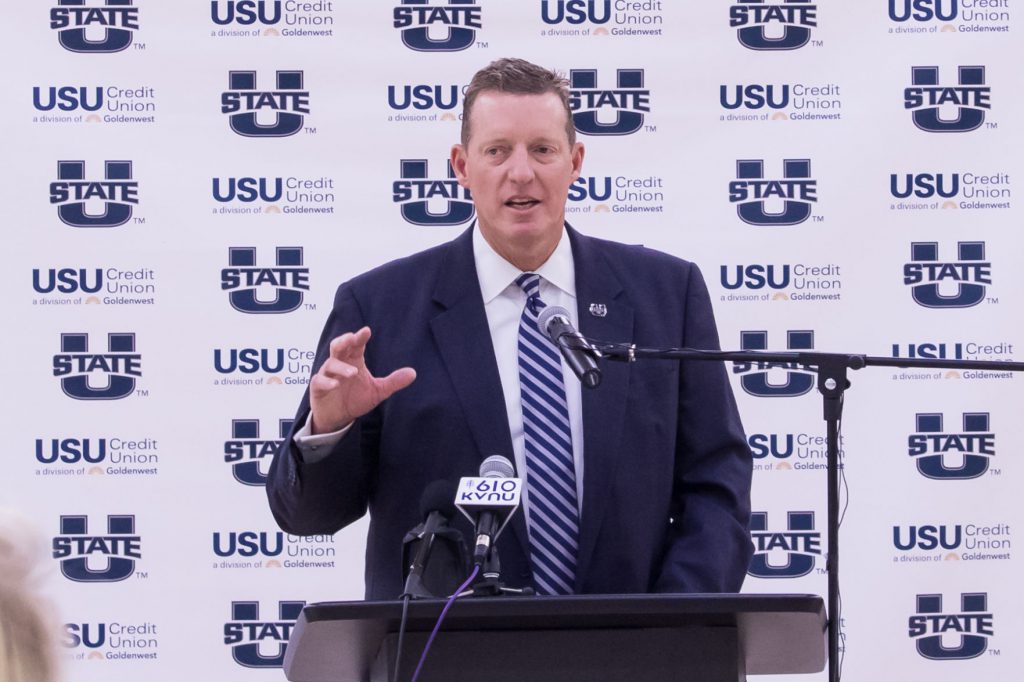 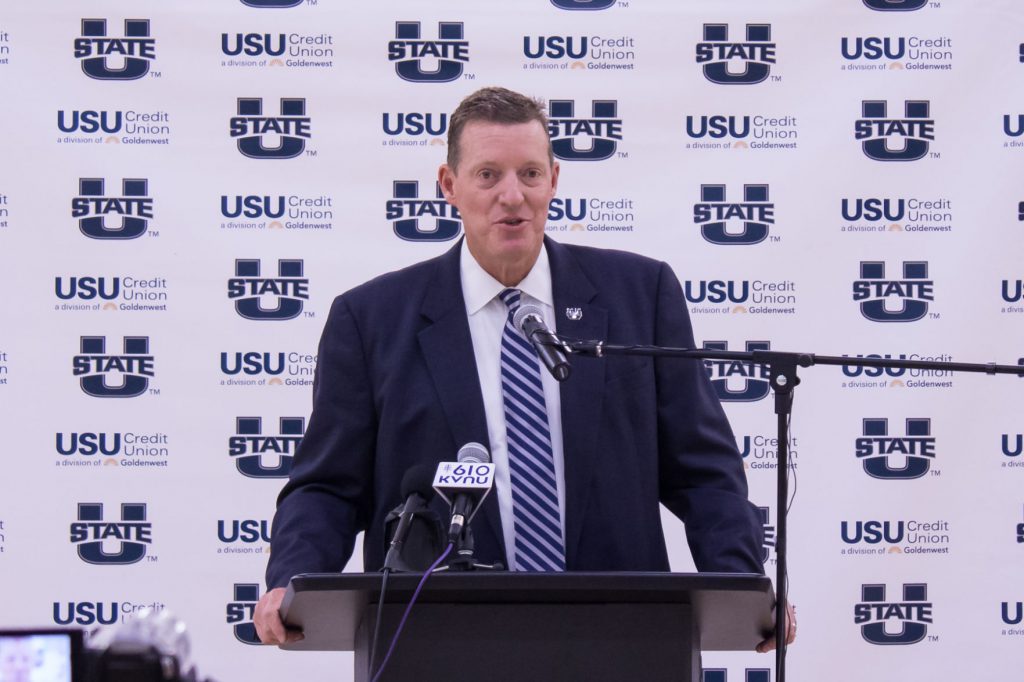 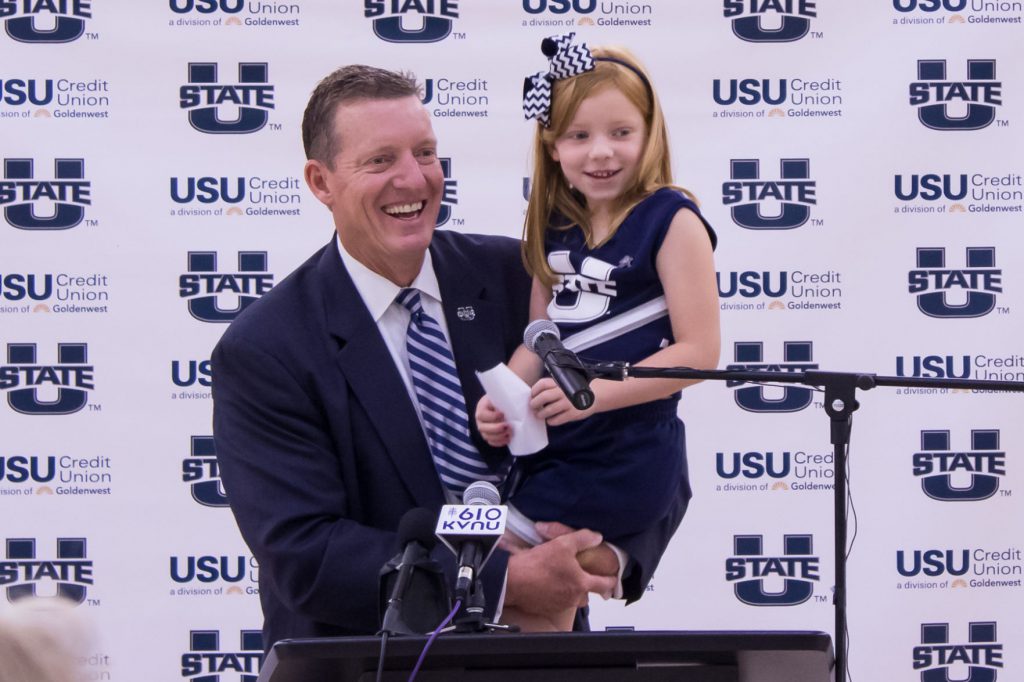 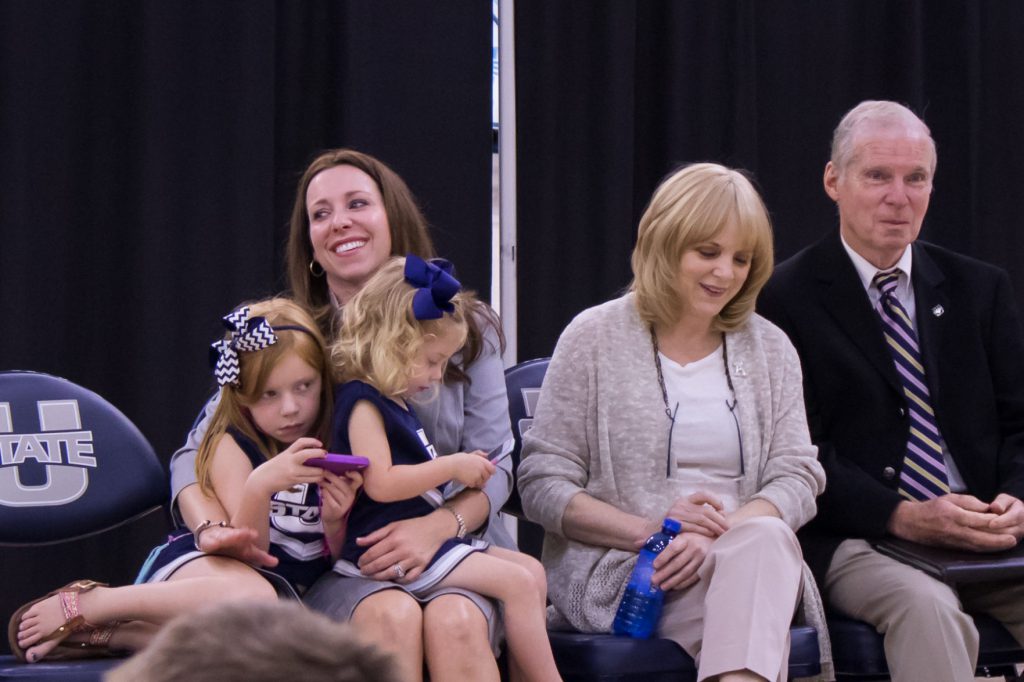 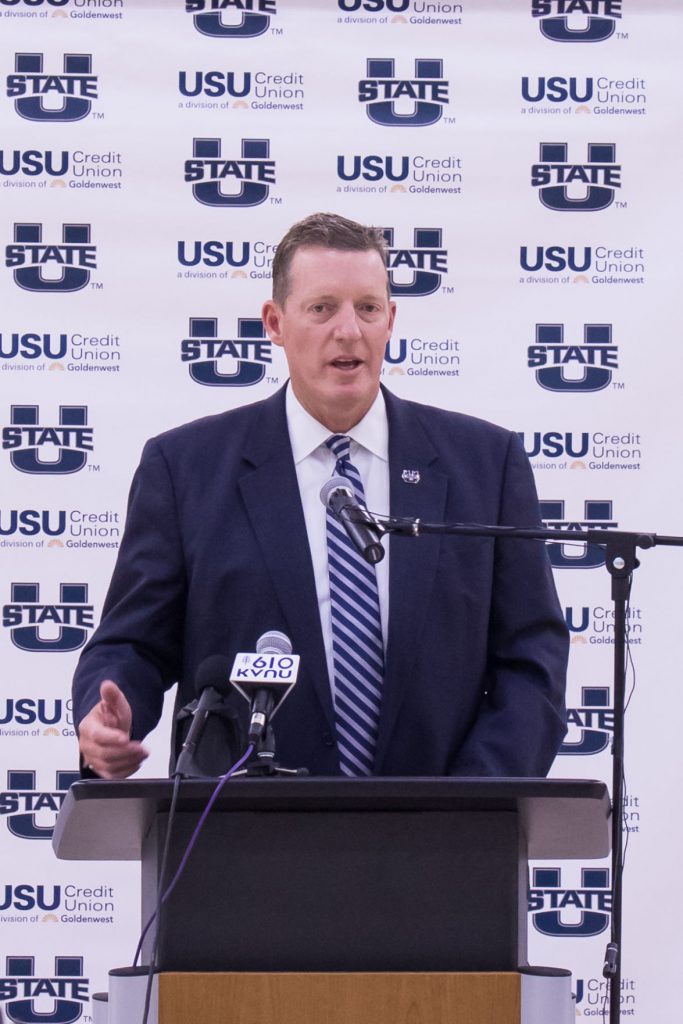 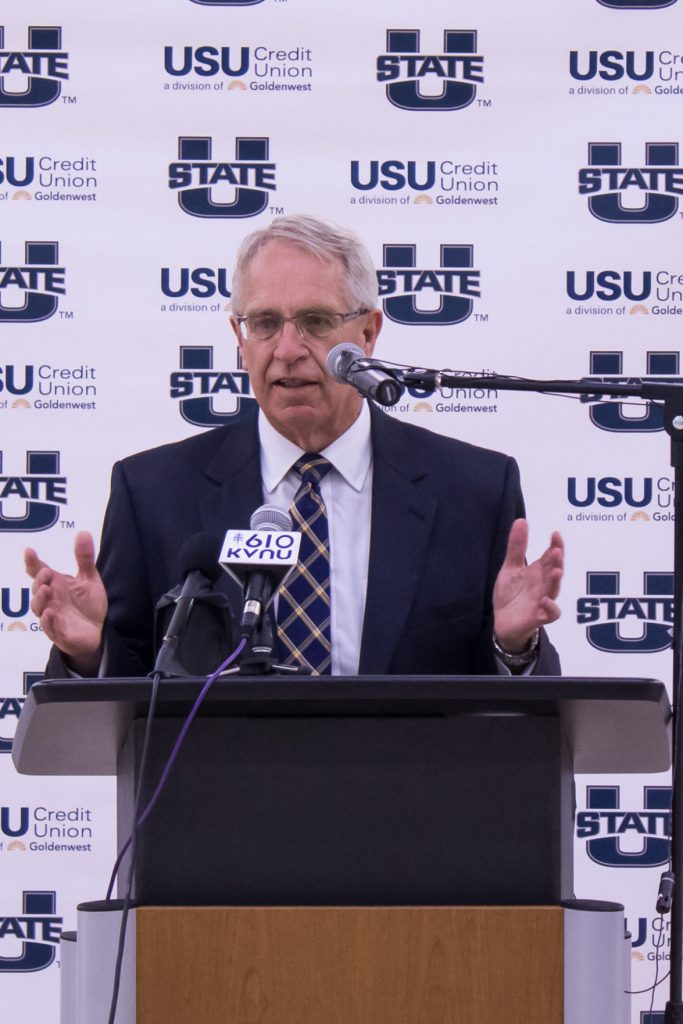 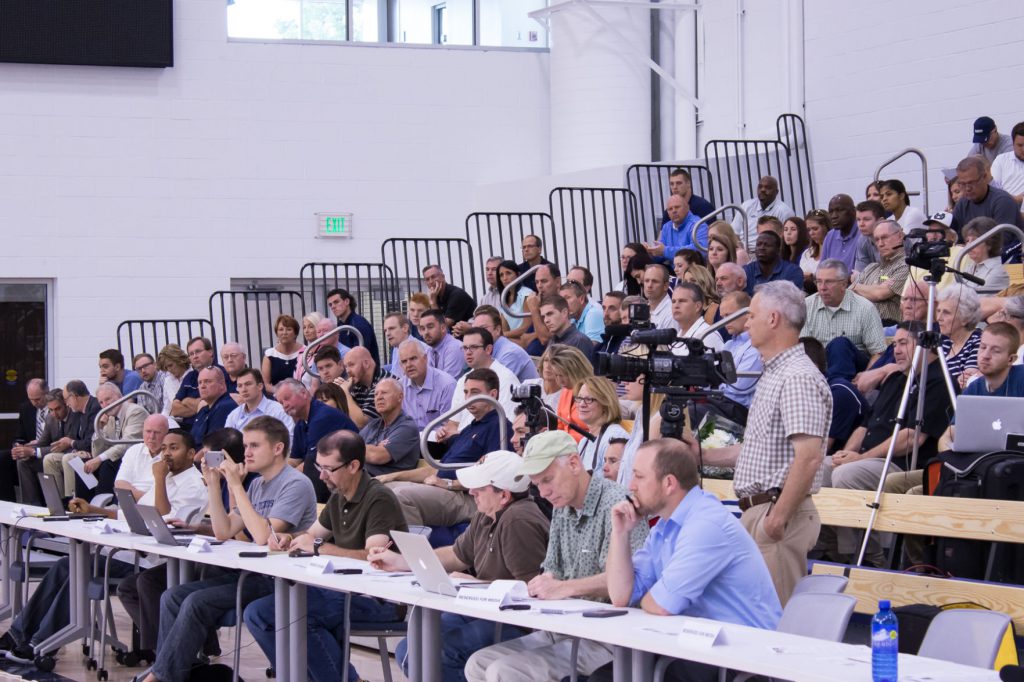 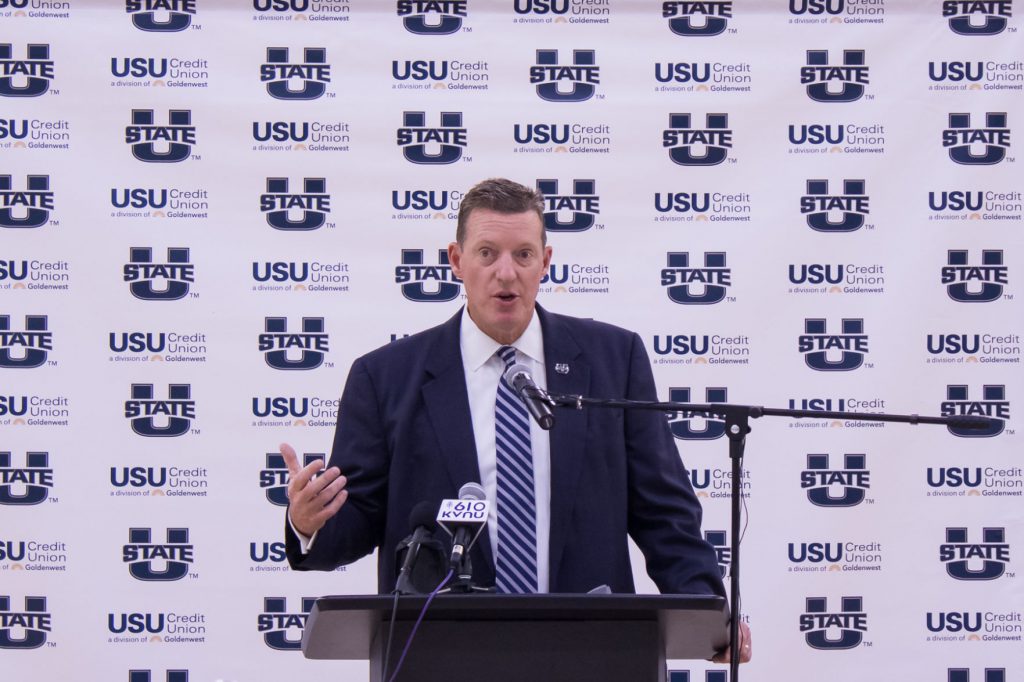