Ever wondered what the best car show might be like? Not me. I never attended or cared for one before. I thought it was a “boy thing.” I guess it isn’t after all, since I got hooked.

My first encounter with the car show was through eavesdropping. When the car show season kicked off at Lee’s Marketplace, I was busy working in the background trying to get things set up for its first inaugural art gallery. Some of the cars sounded like powerful land-yacht engines steered by drivers whose minds, unlike mine, were farthest from fuel consumption or oil crises. Others sounded no less powerful than muscle cars, the kind whose passengers would do well in making sure to fasten the seatbelt before it had a chance to move an inch. I got hooked right there and then because I love an adventure and a surprise. A car show is a great place to play with sound because you want that element of surprise.

And those sounds turned out to be a lovely on-off presence throughout the five-hour annual Father’s Day weekend extravaganza, reminding me that I was not forgotten, and beckoning me to come by and take a look. Together these vehicles sounded contrapuntally like J.S. Bach’s Prelude and Fugue in A minor, performed in the Logan Tabernacle Summer Noon Concert Series only four days later by Karla Axtell. Interestingly, Axtell, grandmother of 16, made a point to issue a friendly seatbelt warning before diving in mercilessly on the organ, speeding along like a first-rate hot rod engine, and finally coming to an end with an electrifying sense of freewheeling, unrestrained virtuosity, which totally enthralled her audience, men and women, boys and girls. Indulging in metaphorical thinking, I whispered with great excitement, “Here she comes… A mighty driver behind the wheel!”

I suppose I connected at an equally meaningful level with the car show that sounded at times like the brass section of a full orchestra on the other side of town. It made me think of a proverb about one hundred different voices making themselves heard, all at the same time, or bai jia zheng ming (百家争鸣). No, they are not part of a choir. Rather, they represent a society or occasion that celebrates diversity.

A case in point is the car show that welcomes cars, trucks, and motorcycles of all eras, makes, and models – classic, custom, exotic, restored, modified, specialty, new concept, production, you name it. It was eye-opening to see over 100 vehicles and their owners make a special appearance all in one place. Many of them have overcome a lot of challenges in getting proper maintenance done to ensure good looks and top-notch performance, and/or in getting their prides and joys restored or modified, professionally detailed, vacuumed, and waxed for the big day. In chatting with some of the car owners who have been participating in car shows for 25 years, I found out that they generally agree, like the Chinese proverb suggests, that what makes many of them want to come back year after year is the feeling of total acceptance, fun, and appreciation. “Being different is in itself a virtue and a contribution at the car show. And you collect not just great cars, you collect great friends too,” said Logan resident Mike Cazier, the proud owner of a pristine 1950 Concord blue Studebaker, and son of the first-generation “Studebaker nuts” who purchased the family’s first brand-new Studebaker in 1950. For me, and my Little Bloomsbury art ambassador friends Shelby Jones and Dylan Anderson, the best part of the show was hitching a ride with Cazier in that heart-stealing jet plane-like Studebaker after Shelby painted it. Mike was right – the vehicle, with its signature bullet nose, was different enough to have made a difference. It certainly did for me. Now I wouldn’t want to miss a car show, whether or not they have an iconic 1951 Mercury Eight to give away. It is a “girl thing” too. 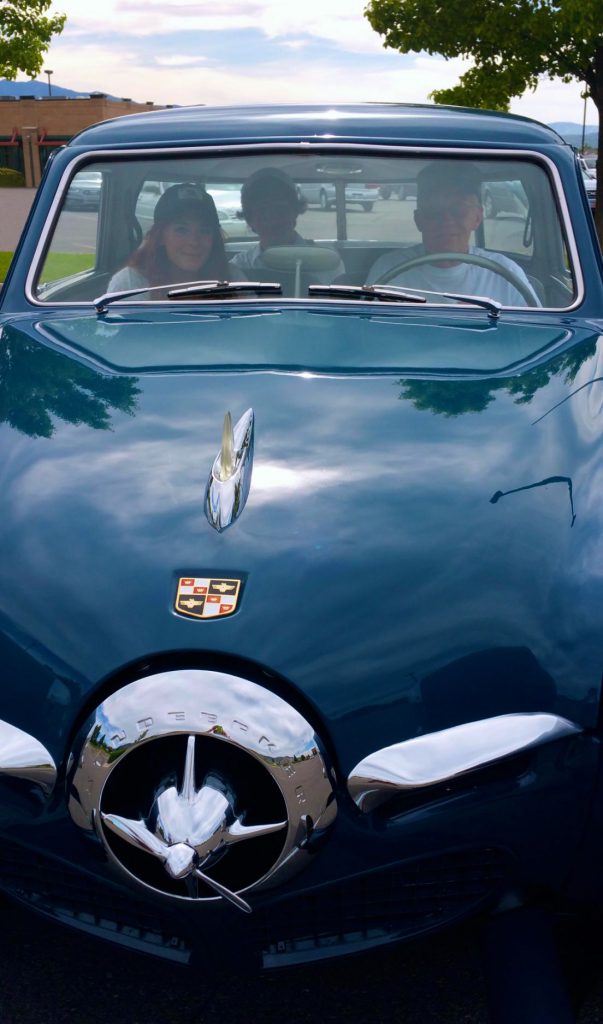 Before the take off: Mike Cazier, owner of the 1950 Concord blue Studebaker, with the author’s joyriding companions.