Kalin Menlove-McGinni listens to testimony during his preliminary hearing for felony manslaughter, in 1st District Court in Logan on Tuesday.

Menlove-McGinni sat next to his attorney as prosecutors began presenting evidence in 1st District Court. He was arrested in November, 2014, accused of causing an accident in September that killed 42-year-old Leigh Purser. He is being charged with manslaughter, a second-degree felony and no proof of insurance, a class B misdemeanor.

Utah Highway Patrol troopers report Menlove-McGinni was driving a gray minivan northbound on US 91 near Cove, when he rear ended a black Jeep Wrangler, driven by Purser. The impact pushed the Jeep into the southbound lane, where it was hit again by a Dodge pickup truck.

Purser was not wearing a seat belt and is believed to have died on impact. He was pronounced dead at the scene.

During Tuesday’s hearing, state attorney Spencer Walsh said Menlove-McGinni told troopers after the accident, he had not slept in the last 48 hours and had only slept three hours in the last 72 hours.

Malaki Becerrill worked with Menlove-McGinni at a call center at the time of the accident. He told the court the defendant often was drowsy at work.

On the morning of the accident, after working the graveyard shift, Becerrill said he noticed how tired Menlove-McGinni was and suggested he should take a nap before driving home.

Kelven Alvey, the driver of the Dodge pickup truck also testified that he was driving south on US 91 on the morning of the accident when he stuck Purser’s Jeep Wrangler. He told the court how he pushed the brake pedal so hard to try and stop, his right leg was injured.

Judge Kevin Allen continued the hearing until November 3, when he is expected to rule if there is sufficient evidence to bind Menlove-McGinni over for trial. 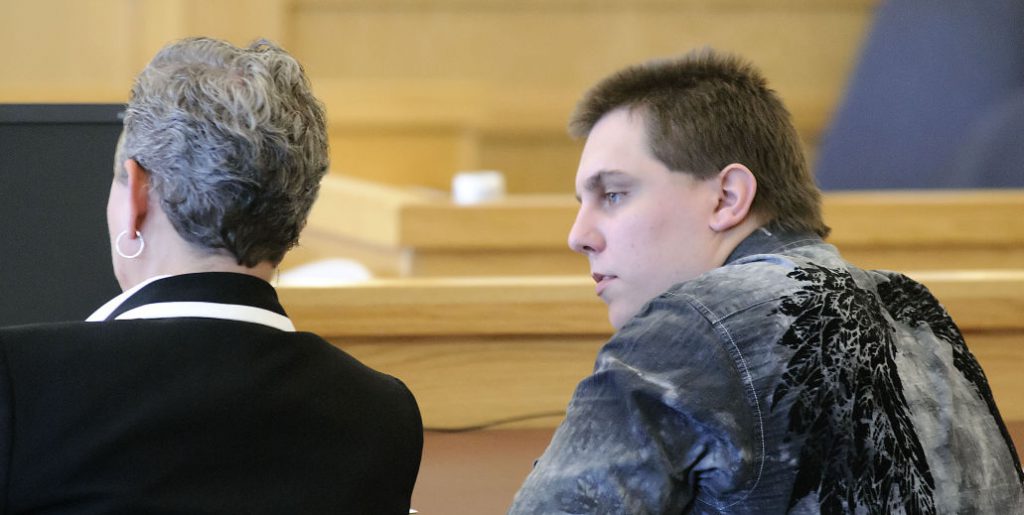 Kalin Menlove-McGinni talks to his lawyer Camille Neider, during his preliminary hearing for felony manslaughter, in 1st District Court in Logan on Tuesday.