LOGAN, Utah – Deshane Hines couldn’t wait to get back on the field. After suffering an injury in the season opener against Southern Utah on Sept. 3, Hines was forced to miss Utah State’s second game of the season against Utah.

The 5-foot-10, 185-pound senior cornerback from Fremont, Calif., doesn’t ever want to go through something like that again.

“It was really frustrating,” Hines said. “When I went down I was just like, ‘I’ve been waiting so long for this season and preparing.’ I was praying it wouldn’t keep me out for a long time. I realized how much football meant to me and how I need to be on the field. It hurt me when I couldn’t play in the Utah game. I wanted to help the team win and to not be able to contribute was tough.”

Fortunately for Hines and the Aggies, he was back on the field in Week 3 at Washington. The son of Carnedius and Sharon Hines recorded a career-high seven tackles and forced his first career fumble against the Huskies.

“He’s a young man with a lot of football savvy,” Utah State cornerbacks coach/defensive passing game coordinator Kendrick Shaver said. “He brings leadership to the back end and he is my best technician back there. His football IQ is second to none in my room. I can’t say enough about him. He’s a great young man. He’s no maintenance. You talk about low maintenance, but he’s no maintenance. You don’t have to worry about him being on time for anything and he’s taking care of his schooling. He’s going to graduate in December.”

Bryant Hayes, a close friend and teammate of Hines, is another Aggie who has had to miss playing time during his senior campaign. The 5-9, 175-pound cornerback from Compton, Calif., was suspended the first two games of the season and did not play against Washington.

“It hurts,” admitted Bryant, when asked about not being able to get on the field yet. “When I got the news about being suspended, it hurt. But, that made me realize how much football means to me, rather than other things. I love football and not being on the field with my brothers and teammates hurts. I won’t do anything else to jeopardize my playing time because I let my teammates down. It was a big learning process.”

Hines and Hayes formed a close bond when they were teammates at the College of San Mateo (Calif.), helping the Bulldogs to a 10-1 record and No. 6 national ranking during their sophomore campaigns in 2013.

Hayes led the College of San Mateo with four interceptions that season, to go along with 17 tackles, while Hines recorded 34 tackles and four pass breakups.

“You see him on the field and he’s all over the place,” Hines says of Hayes. “He’s quick. He’s like a little rabbit everywhere and covers guys up. I remember at San Mateo, nobody was ever able to catch a ball on him and that has carried over to Utah State. When he comes back, you’re going to feel his presence.”

Coming out of the College of San Mateo, Hines was the first to sign with the Aggies. Not long after, Hayes joined his good friend in Logan.

“When I came on my recruiting trip, the first thing I thought was it’s way too cold for me, being from SoCal,” Hayes said. “Daniel Gray was my host and we went bowling and to a basketball game. They showed me a good time, so when I got here, I was just looking at everybody and thought, ‘These are players I can play with.’ It’s a family here, so that’s what made me come here.”

Both players are glad the other one is also at Utah State.

“When we came here we moved in together and we were able to learn the plays together and do everything together,” Hines said. “It’s easier when you have somebody else with you going through this process; you don’t get as lonely.”

Added Hayes: “I can talk to Deshane about anything. If I’m homesick or whatever, I always have somebody to talk to because Deshane is like my brother and we’ve been together for a while.”

During his junior season with the Aggies in 2014, Hayes started three of the 12 games he played in. The son of Bryant Hayes and Carla Moore recorded 20 tackles, including 6.0 tackles for loss and 4.0 sacks, and five pass breakups.

“The first game against Tennessee (in 2014), I got hurt,” Hayes explained. “I messed up my hamstring and I missed a couple of games because of that, but when I got back on the field I did anything I could to help the team. Whatever I could do to help the team, I did it. I stayed focused and didn’t get down or anything.”

Hines played in all 14 games for Utah State last season and made his first career start against UTEP in the Gildan New Mexico Bowl, where he tallied six tackles in the Aggies’ 21-6 victory. The native of Fremont, Calif., finished the year with 20 tackles and ranked tied for second on the team with two interceptions, to go along with a pass breakup.

“It’s been a learning process for me coming from junior college to this next level,” Hines said. “My first year I came in trying to learn things, trying to make any impact I could with the team on special teams and eventually on defense. I’ve just been grinding and trying to help the team as much as possible, trying to make the most out of my time here.”

Not only did Hines produce on the field for the Aggies during his junior campaign, but he also excelled in the classroom as he earned academic all-Mountain West and MW Scholar-Athlete honors.

In their final seasons with the Aggies, Hayes and Hines, who are both majoring in sociology, want nothing more than to help Utah State win a title.

Hines is on track to graduate in December, while Hayes will graduate with his degree in the spring of 2016. 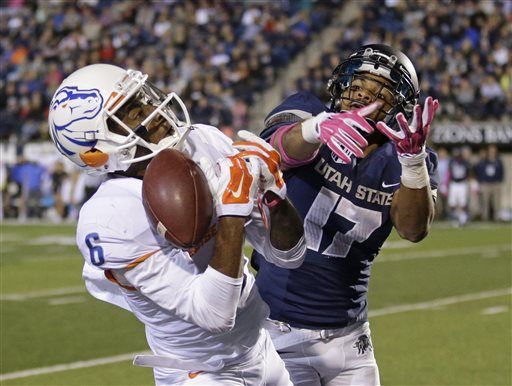