SALT LAKE CITY – Sky View’s championship hopes ended Friday afternoon after a 23-7 loss to the Herriman Mustangs. Two costly turnovers and 289 yards from the Herriman rushing attack was too much for the Bobcats to overcome. Mustang runningback Jake Jutkins ran 32 times for 175 yards while his teammate Kayden Strasters added another 92 yards on the ground.

“Our kids gave every ounce of effort they had,” Sky View head coach Craig Anhder said. “I’m really proud of them and I’m pleased with what they’ve been able to accomplish this season.”

“It hurts me because I know how hard our kids have worked,” Anhder said. “They deserved to be here. You can’t take anything away from these kids, they just played so tough and gave everything they had. This will be a special group that I’ll cherish for a long time.”

The Bobcat offense was able to take the lead with 38 seconds left in the first quarter. The game was still scoreless when Sky View found itself on the Mustang 36-yard line. Quarterback Garrison Beach connected with Bryce Mortenson on an 18-yard pass then got 18 more yards on a touchdown pass to Breygan Holbrook.

“We wanted to pass the ball,” Anhder said. “We feel like they gave us some of the quick passes and we were able to take advantage of them at first.”

Herriman responded with a drive that went 65 yards and took 6:51 off the clock, but the Bobcat defense was able to hold the Mustangs to a 35-yard field goal. Sky View went into halftime with a 7-3 lead.

Early in the third quarter Herriman jumped out on top when Herriman’s Noah Vaea picked off a Beach pass and ran 13 yards the other way for a touchdown. After the extra point kick went wide-right, the Mustangs led 9-7.

Things got worse almost immediately. When Sky View fumbled the ball on the return it was recovered by Herriman on the Bobcat 25. A few plays later Mustang Leki Fotu caught a pass and ran untouched into the endzone giving Herriman a 16-7 lead with 6:37 remaining in the third.

“They’re a great team, we knew they were going to be tough,” Anhder said. “We knew they had a great defense.”

Herriman scored its 23rd unanswered point early in the fourth quarter. It looked like the Bobcat defense was going to come up with the stop, but on third-and-19 the Mustangs completed a 25-yard halfback pass. The first down put Herriman inside the redzone and set up a Jutkins rushing touchdown that gave Sky View a 16-point deficit with less than nine minutes to work with.

The comeback attempt started when Beach connected with wide receiver Alex McCrae on an 80-yard pass play to the 8-yard line, but the Bobcats were unable to convert and turned the ball over on downs. If the Bobcats had any hope left, it came when Riley Haderlie recovered a fumble on the Mustang 15. The momentum didn’t last, less than a minute later Sky View gave the ball back on a fumble of its own.

Sky View finished the 2015 season with a 12-1 record and a region championship. Herriman will face the winner of Lone Peak and Bingham for the state championship. 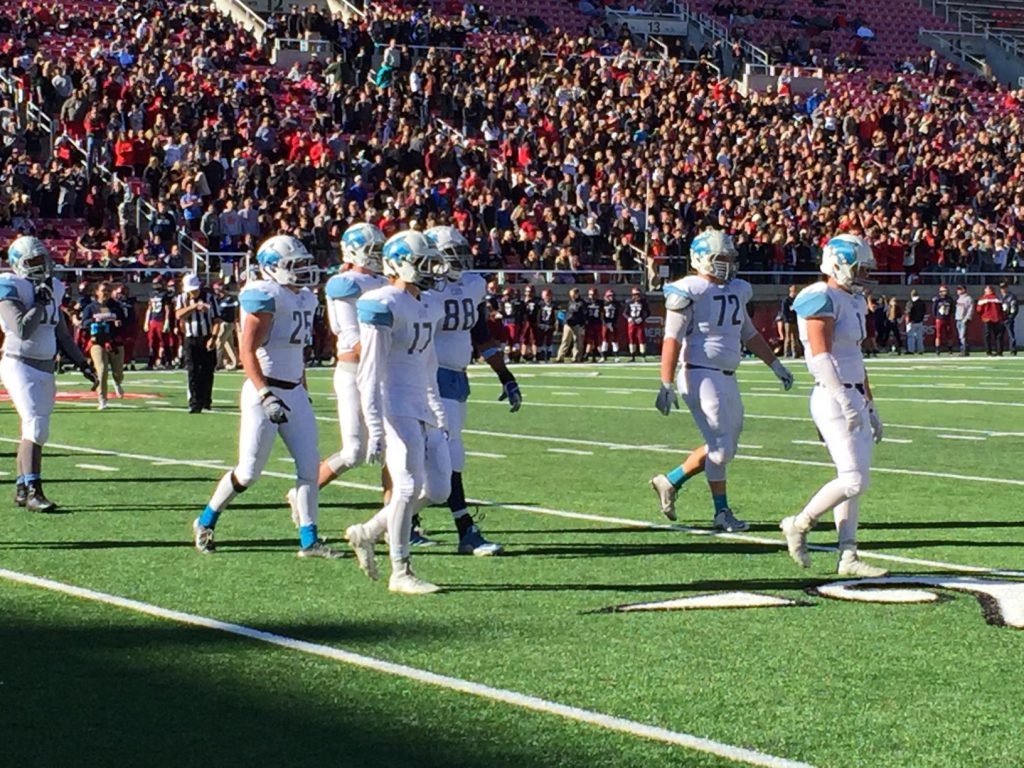