BOISE, Idaho — When Akron placekicker Robert Stein lost his scholarship after his freshman year, he didn’t quit. Instead, he fought his way back to the top of the depth chart without the free ride.

And after Stein made three field goals and earned MVP honors in leading Akron to a 23-21 victory over Utah State in the Famous Idaho Potato Bowl on Tuesday, coach Terry Bowden was delighted Stein stuck it out.

“He wasn’t getting the job done during spring practice going into his sophomore year, so I told him that I was giving his scholarship to a freshman,” Bowden said. “There were tears that day — from both of us. But he stayed with us and took his job back. And the next season when I knew I had to give him his scholarship back, he told me to let the other kicker keep it.”

Stein endeared himself to Bowden for his sacrifice — he also became the school’s all-time scoring leader with a 46-yard field goal with 8:15 remaining in the fourth quarter that proved to be the difference. He finished his career with 268 points.

“This game today just epitomizes everything about my career here,” Stein said. “And the fact that I was able to end on a note like this is just great.”

Akron (8-5) finished with eight wins for the first time since moving up to FBS in 1987. The record came four years to the day after the school hired coach Terry Bowden.

“This is the fifth program I’ve taken over and we’ve had a tough row to hoe, but that’s what makes this one the most memorable because it’s been so hard,” Bowden said.

“When you’re a Bowden junior there aren’t many records for you to go after,” said the son of famed coach Bobby Bowden. “But I know forever that we’re the first team in Akron school history to get eight wins in (FBS), and that’s a record he ain’t ever gonna have.”

While Stein provided the difference in scoring, it was Akron’s defense that made the lead stick.

Brown, the MAC defensive player of the year, had eight tackles along with 1 1/2 sacks, 2 1/2 tackles for loss, and a critical forced fumble.

Utah State (6-7) mounted a comeback behind senior quarterback Chuckie Keeton, who threw a 2-yard touchdown pass to Hunter Sharp with 1:12 remaining to pull to 23-21. But Akron recovered the onside kick and then stopped one final flea flicker play by Utah State as time expired.

“When you go back and look at the games where we were explosive on offense, we were scoring touchdowns (when we got down close) … but today we didn’t produce,” Utah State coach Matt Wells said. “But I liked the fight and character of our kids who battled all the way down to the end.”

While Akron averaged less than 200 yards passing per game this season, the Zips turned to the air to score the game’s first points.

After an incompletion, Zips quarterback Thomas Woodson hit A.J. Coney on a 42-yard pass play. On the next play, Akron dug into its bag of tricks, scoring when receiver Tyrell Goodman hit Woodson with a 14-yard pass for the 7-0 lead.

Utah State struggled to generate any offense early as the Aggies, going through three-and-out for minus-5 yards on their first four possessions.

The Aggies, however, got a spark after a long punt return by Sharp set up Utah State at the Akron 31. But on third-and-8 from the Zips 18, Akron cornerback Kris Givens ripped an apparent touchdown catch out of Brandon Swindall’s arms. Utah State elected to go for a first down instead of kick a field goal, but the Akron defense held.

Utah State wasted little time in answering. Devante Mays broke off a career-long 61-yard run before Jatavis Brown caught him at the Akron 10. Two plays later, Kent Myers hit Swindall on a 9-yard pass play. Brock Warren’s extra point cut the deficit to 10-7 with 1:21 left in the half.

On Akron’s next possession, Utah State’s defense stiffened and forced a punt with 1:00 left in the half, using two time outs to preserve time on the clock.

However, it was a plan that backfired.

With Utah State on the Akron 28, Brown stripped the ball loose from Myers, and Akron defensive tackle Rodney Coe scooped up the ball and rambled 56 yards to the Aggies 12 with 4 seconds left in the half.

Stein booted a 29-yard field goal as time expired to give the Zips a 13-7 lead.

In the second half, Utah State took its first possession 64 yards in seven plays, scoring on a 19-yard pass play from Meyers to Sharp. Warren’s extra point gave the Aggies their first lead of the game at 14-13.

Akron’s offense could muster only two yards on its next possession, but found new life after the Zips’ defense recovered a fumble at the Utah State 40.

Eight plays later, Donnell Alexander sprinted into the end zone from 2 yards out to help the Zips regain the lead at 20-14 with 5:43 left in the third quarter.

Andrew Pratt set a career high with nine receptions for 94 yards to lead the Zips. Hunter Sharp had 11 catches for 93 yards.

Mays led Utah State on the ground with 124 yards on 12 carries, while Woodson rushed for 47 yards to lead Akron. 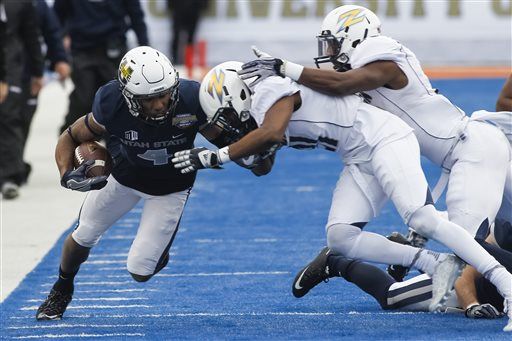 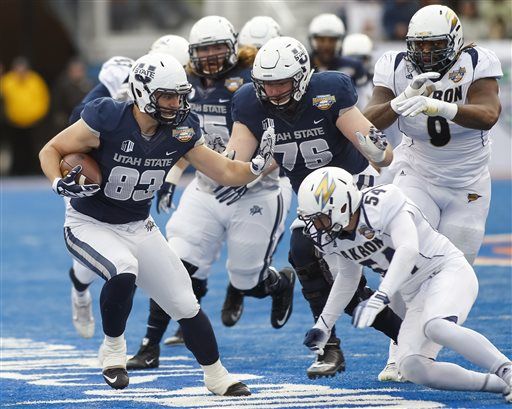 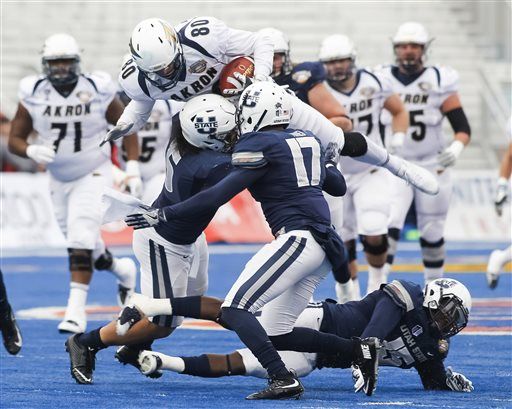 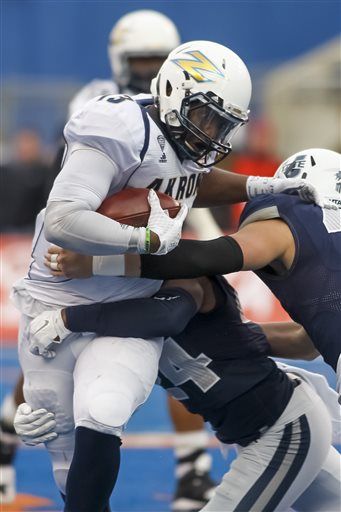 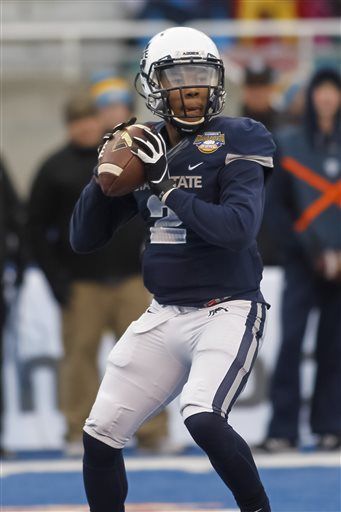 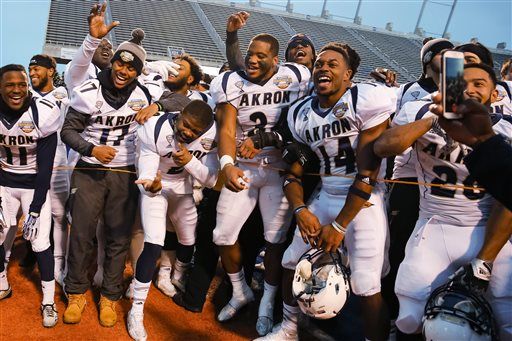 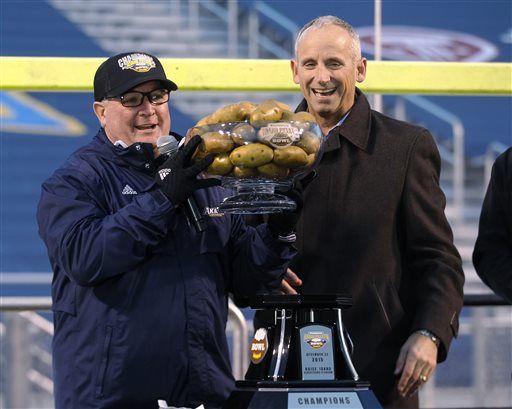