LOGAN, Utah – Utah State’s Brandon Swindall and Chuckie Keeton have accepted invitations to participate in the 2016 College Gridiron Showcase, which will be held Jan. 10-13 at Pennington Field in Bedford, Texas.

Keeton, a 6-foot-2, 210-pound redshirt senior quarterback started five of the seven games he played in for the Aggies this season. He finished the year by completing 104-of-199 passes for 1,006 yards and four touchdowns, to go along with seven interceptions. He also rushed for 181 yards and a touchdown on 50 carries.

Keeton also ranks second all-time in school history in completion percentage (.629), passing yards (7,393), completions (672), pass attempts (1,068) and rushing touchdowns by a quarterback (16). He is also the only quarterback in school history to throw five touchdown passes in three separate games, accomplishing the feat against Air Force and Weber State during the 2013 campaign, and against Wyoming as a freshman in 2011.

Swindall is a 6-foot-4, 205-pound wide receiver. The native of Oklahoma City, Okla., played in 11 games for Utah State this season and recorded 14 catches for 173 yards (12.4 ypc) and three touchdowns. In the Famous Idaho Potato Bowl against Akron, his final game as an Aggie, Swindall caught three passes for 35 yards and a career-high-tying two touchdowns.

The College Gridiron Showcase &amp; Symposium is a four-day event for all college football divisions that provides exposure and education for top seniors from around the country. The players are selected by a panel of football experts and receive professional coaching, mentoring, life coaching and seminars that benefit them as they move forward in their professional lives in or out of football.

This year’s event will also contain a strong professional football education symposium component. The athletes attending the event will have seminars relating to financial education, life as a professional athlete, player expectations (on and off the field), first-hand accounts from former NFL rookies, social media responsibilities, and more. 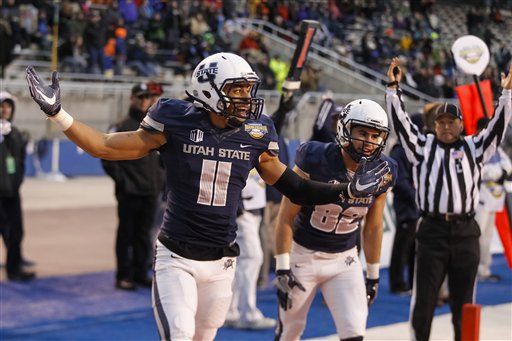