ALBUQUERQUE, N.M. — All New Mexico power forward Tim Williams has been doing this season is justifying his coach’s faith in him.

“I told you from day one he’s going to be good,” Lobos coach Craig Neal said. “I don’t think that there’s anybody better in our league as a low post scorer.”

Williams scored 21 points and New Mexico built a 25-point halftime lead and cruised to a 77-59 victory over Utah State on Saturday.

Williams was 9 of 13 from the floor. Elijah Brown had 18 points with five assists, and Cullen Neal chipped in 12 points, six assists and a career-high four steals for the Lobos (10-6, 3-0 Mountain West), who won their third-straight game since snapping a four-game losing streak.

“He’s hard to guard,” Neal said of Williams, who transferred to New Mexico from Samford.

Three times Williams powered his way through the Aggies’ defense, picking up a bucket and a foul. He also had two blocks.

Neal had a steal and then an assist to Obij Aget, whose fast-break dunk sparked a 14-0 run which stretched the Lobos’ lead to 31-12 midway through the first half. New Mexico led 43-18 at halftime and never trailed.

Williams scored 11 points and Neal added 10 while the Aggies shot just 24 percent on 7-of-29 shooting from the field in the first half.

Utah State went nearly 10 minutes in the first half without a field goal.

“An embarrassing first-half performance,” Aggies coach Tim Duryea said. “They just whooped us every way possible. Overmatched us on the boards. Even when we had a good defensive possession, we turned a guy loose on the boards and allowed a tip in.”

The Lobos pushed their lead to 70-41 with eight minutes left. Williams scored 10 points during the span and capped his scoring with a 3-point play and a dunk.

The Lobos dominated the interior with a rebounding advantage of 44-35 and outscored Utah State 44-28 in the paint.

“The biggest thing is we went inside-out to start,” Neal said. “We were really driving the ball. And we were able to get to the free-throw line. I thought that was huge for us.”

Utah State: The Aggies entered the game as the conference’s fourth-best shooting team from the field and from 3-point range, but shot 26 of 67 for 34 percent from the floor, and 6 of 29 for 21 percent from beyond the arc against the Lobos. … Beat New Mexico 63-60 last season, their first win in Albuquerque since 1979. The Aggies lead the series 20-8. 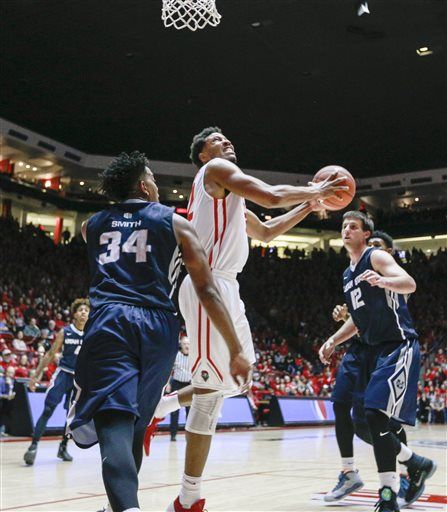 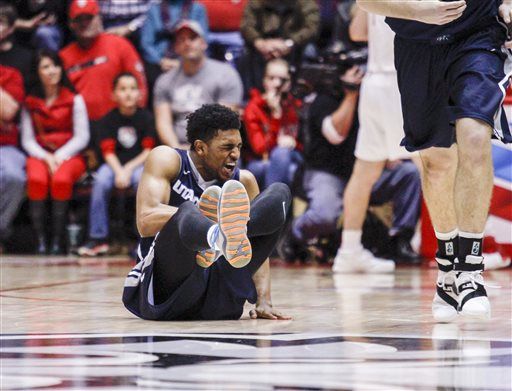 Utah State's Julion Pearre (5) sits cringing on the court after picking up an injury late during the second half an NCAA college basketball game against New Mexico on Saturday, Jan. 9, 2016, in Albuquerque, N.M. New Mexico won 77-59. (AP Photo/Juan Labreche)